18 Comments
Has To Be Pretty Good

The Santa Barbara Int’l Film Festival announced today that Wolf of Wall Street director Martin Scorsese and producer-star Leonardo DiCaprio will sit for a q & a on Thursday, February 6th at the huge Arlington Theatre. I may not be able to attend as I’ll probably be leaving on Wednesday, 2.5 for a two-day Grand Budapest Hotel press event in Berlin. I’ll also miss the SBIFF tribute to All Is Lost star Robert Redford on Friday, 2.7. I will, however, be catching the more-than-five-hour version of Lars von Trier‘s Nymphomaniac at the Berlinale (2.6 to 2.16), for which I’ve been press credentialed. If the SBIFF had stuck to their usual schedule of starting right at the tail end of Sundance, they would begin on Thursday, 2.23 and there wouldn’t be any Berlin conflict at all.

A shallow CNN report about the Wolf of Wall Street controversy aired an hour ago. Anchor Jake Tapper mentioned the usual surface-skimming references — Christina McDowell piece in L.A. Weekly, some bloggers “calling on people for boycott the film,” Hope Holiday, Leonardo DiCaprio video praising Belfort, etc. I for one was hugely irked by the “industry perspective” provided by TheWrap‘s Sharon Waxman, who said that Wolf “clearly does not come down in judgment upon Jordan Belfort…at the end of the film he gets off, he’s teaching seminars.” Really, Sharon?

Earth to Waxman, Tapper: Wolf doesn’t “judge” Belfort in the Stanley Kramer sense of that term, but you’d have to be a drooling moron not to perceive where DiCaprio and director Martin Scorsese are coming from. Not once did Waxman mention the drop-dead-obvious fact that the film is a metaphor for flamboyant 1% greed, or that it clearly portrays Belfort and his cronies as arrogant degenerates. Nor did she mention the final shot of the Aucklanders raptly listening to Belfort’s lecture about selling techniques. She just played right along with the report’s “oooh, controversial movie!” theme.

26 Comments
Why Am I Paying For Cable Programming? 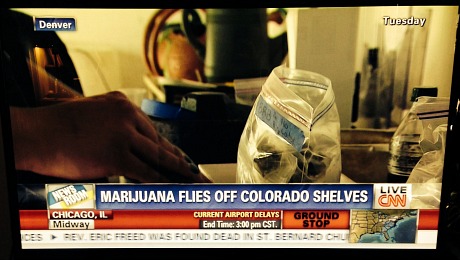 It’s great to hear that unemployed film critic Craig D. Lindsey (cut loose from the Raleigh News & Observer in 2011) has been sent $4 thousand by supporters after lamenting his sorry state on Indiegogo. “There are several things I’ve learned during this whole thing,” Lindsey wrote. “For one, I’ve learned that people aren’t awful. Secondly, while no one wants to be seen as a pitiful charity case, sometimes you need help.” Indeed. I’ve been there. I was in a terrible spot in the mid ’90s and didn’t know what to do. Then a screenwriter pal (Robert Towne if you must know) lent me a grand (which was worth a lot more in ’96) and it got me through the rough patch. I was going to give Lindsey some money myself but then I saw a photo of him. My honest reaction? He might be in dire financial straits, but he doesn’t seem to have cut back on food. Or whatever it is that has led to his bulky appearance. 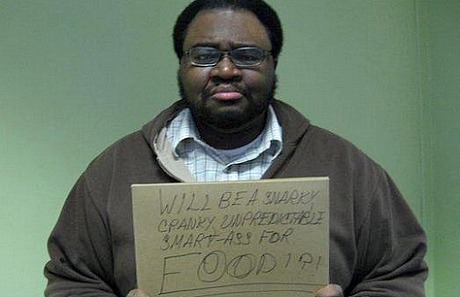 The Producers Guild of America (PGA) announced their feature film and long-form TV nominees about an hour ago, and most of their ten movie noms are right-on. They actually included the brilliant but heavily besieged Wolf of Wall Street! Cojones! But there’s a problem with (a) Joel and Ethan Coen‘s Inside Llewyn Davis being blown off and (b) Saving Mr. Banks being included.

Banks is a corporate-fellating, pro-Disney propaganda fantasy piece that maligns the memory of P.L. Travers by mis-portraying her as a clenched and joyless scold. And Davis is a note-perfect, multi-layered (if melancholy) period art film of the absolute highest order.

Why did the PGA wave it off? One theory is that the struggle of a somewhat asshole-ian artist to survive is not exactly a relatable subject. Producers have never been fans of sardonic despair — they believe in go-go-go. Remember, also, that the only producer type in the whole film is F. Murray Abraham‘s Bud Grossman (based on Bob Dylan‘s real-life manager Albert Grossman), a blunt and somewhat chilly-mannered sort. I’m not saying this is the whole magilla, but on some level I suspect that the PGA didn’t vote against Inside Llewyn Davis as much as vote against this sort of characterization, which reiterates the cliche that producers and managers and money men are basically pricks. Okay, “practical-minded businesspersons” who don’t bullshit around, but not exactly radiators of warmth.

You know what I don’t do? Take dismissive “go fry in hell!” shots at other journalists. The out-of-the-blue kind, I mean. Get up, shower, brush your teeth, go to your computer and write “journalist X is a foul scourge and an evil spawn!” If they take shots at me I’ll let them have it with both barrels, but with very, very few exceptions I’ll never go after someone else preemptively, and certainly not judgmentally when it comes to their values or moral philosophy. The worst I’ll do is crticize a viewpoint that I strongly disagree with. The world is cruel and predatory enough without savaging your own. You don’t eviscerate a fellow journo unless they’ve been found guilty of some appalling crime against humanity and even then you need to think it over before hitting “save.” Journalists are grass-eating cows on my my side of the fence. If they behave like p.c. brownshirts or fang-toothed wolverines I’ll get my rifle out and do what I can to cause them pain. But I’ll never draw first blood. Well, hardly ever.