Jimmy Fallon‘s Bruce Springsteen is really first-rate; arguably as good The Boss himself. This reminded me of the Joe Cocker-John Belushi SNL duet from…when was that, ’76 or thereabouts?

I trust I’ve made myself clear over the past several years. I love writing this column 24/7 but “the season” — the six-month period between Telluride/Toronto/Venice and the Oscars — is where the real fun and thrills lie. And yet the idea of this same period consuming huge amounts of time and energy and incalculable brain-wave activity in order to predict which films and filmmakers that members of the Academy of Motion Picture Arts and Sciences will choose to give Oscars…what is that? I need to put this carefully. Covering the Oscar race pays pretty well, and for that I’m grateful. And I respect the fact that it’s a very, very difficult thing for a film to find sufficient acclaim to even get into the award-season conversation, much less become a finalist. There is real value in this, and each year serious payoffs are at stake. I don’t belittle this effort or the Oscar economy for a second.

But I do belittle the taste of those Academy members (i.e., not all) who have proven year after year that they have very little belief in serious Movie Catholicism, and that they basically regard the Oscars as a kind of high-school popularity contest. Yes, it’s always been this way but I think it might be getting worse. The King’s Speech and especially The Artist winning Best Picture took something out of me, and then the likable, perfectly efficient Argo after that…c’mon! And now the idea of an indisputable masterpiece like 12 Years A Slave possibly losing the Best Picture Oscar to a technically astounding, eye-popping thrill ride like Gravity plus the idea of Martin Scorsese and Leonardo DiCaprio having to do interview after interview to try and persuade the Hope Holiday contingent that The Wolf of Wall Street isn’t a celebration of vile behavior…I swear to God the doors of perception are narrowing.

Too many Academy members seem to favor films that provide an older person’s idea of emotional comfort (tearful sentiment, delivering some echo from their youth, resuscitating some facsimile of something well remembered) more than anything fresh or unusual or even semi-challenging. Not always but a lot of the time. This is partly if not largely due to the “deadwood” contingent — too many Academy members haven’t worked in the industry for too long, and their tastes are just too conservative and mildewed and doddering. Every year they bring everyone down.

“I was so taken with my first viewing of Hany Abu-Assad‘s Omar, a Palestinian-produced thriller about betrayal and double-agenting in the West Bank, that I caught it again last night at the Palm Springs Film Festival,” I wrote on 1.5.14. “It’s a taut, urgent, highly realistic thriller that squeezes its characters and viewers like a vise. Omar is among the Academy’s short-listed Best Foreign Language Feature contenders, and with my personal favorites, Asghar Farhadi‘s The Past and Yuval Adler‘s Bethlehem (which is quite similar to Abu-Assad’s film) out of the running, I guess I’m an Omar guy at this stage.” I’m presuming that the Academy will nominate it Thursday morning as one of five Best Foreign Language Features.

Of course Jennifer Lawrence is tied to the Hunger Games franchise like a slave! A very rich slave but a slave nonetheless. I laughed when I read American Hustle‘s David O. Russell had made this analogy. She took the money of her own free will, of course, and in so doing agreed to submit to the needs of the franchise until it finishes. To me this is a somewhat amusing, perfectly acceptable way to describe what Lawrence is going through; ditto with the X-Men franchise. But leave it to the politically correct brownshirt morons to complain and make a stink about Russell’s remark, for which he has now “apologized.”

Russell’s statement of contrition: “Clearly, I used a stupid analogy in a poor attempt at humor. I realized it the minute I said it and I am truly sorry.”

I would also add the following to Russell’s apology: “The word ‘slavery’ can never be and should never be used in a non-literal fashion. It can only be used if the speaker is referring to actual slavery as it existed in the United States in the 19th century and in other cultures around the world, going back to the ancient Egyptians enslaving the Hebrews. It can never, EVER be used as a metaphor or a figure of speech. I was very arrogant and insensitive to use this term. The word has has one use and one use only.”

Five weeks ago I did a short little riff on six Sundance ’14 standouts. But the more I sift through the programs, the less excited I am. I’m not down on anything — just even-toned. The usual 25 or so films will be seen and the usual five or six (at most) will emerge as genuine standouts. The first order of business is always to decide which films look dicey, and in that effort my heartfelt thanks to the team at Total Film — experience has taught me that almost everything these guys are excited about and hoping to like, I’m probably going to find irksome or dislikable or worse. Here, in any event, are a few pre-festival spitballs — instinct, off the top, “what do I know?”

Damien Chazelle‘s Whiplash appears to have heat, granted, but Miles Teller irritates me for what I freely admit are unfair and unwarranted reasons. (That “driving and not looking” scene in The Spectacular Now is one of them.) Steve James‘ Life Itself, the Roger Ebert doc, will be poignant and moving and very well crafted, I’m sure, but I wonder how nakedly honest — the more reverent the portrayal, the less interesting the subject becomes. Gareth Evans‘ The Raid 2: Bernandal is an instant must-to-avoid because (a) I hated The Raid (thanks once again to James Rocchi for recommending it two or three Torontos ago) and (b) I am, as always, fiercely committed to avoiding all Asian-based or Asian-produced action films for the rest of my life. The deadly obnoxious conceit of Michael Fassbender wearing a ceramic mask over his head throughout the entire length of Frank (according to plot descriptions) is obviously a potential catastrophe. The One I Love with Mark Duplass and Elizabeth Moss has to be at least decent. And the generic description of William H. Macy‘s Rudderless — “a musical drama about the power of a parent’s love” — has me scared shitless.

Four good things came out of Sunday night’s Golden Globes Awards. 12 Years A Slave winning for Best Motion Picture, Drama inserted a helpful nudge factor in the deliberations of Academy voters who might otherwise be looking to blow it off because, as several award-season pulsetakers have noted, they feel it’s a morally urgent, award-worthy effort but too much of a grueling sit. Leonardo DiCaprio‘s win for Best Actor, Comedy/Musical was a significant score for The Wolf of Wall Street and an indication that he may land a well-deserved Best Actor Oscar nomination. (This plus an expected Best Picture nom plus one for Best Adapted Screenplay and, if there’s a God of Fairness, a Best Supporting Actor nomination for Jonah Hill.) Ditto the Best Actress, Comedy/Musical win by American Hustle‘s Amy Adams…probably. And the Movie Godz completely agreed with Her‘s Spike Jonze winning for Best Screenplay. 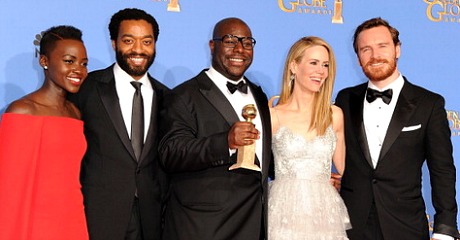