I only got about four hours last night due to the early Oscar nomination wakeup. An hour-long nap (4 to 5 pm) is in order. My first 2014 Sundance Film Festival screening will be Damien Chazelle‘s Whiplash (Yarrow, 6:30 pm), a.k.a. “the Julliard drumming movie.” Miles Teller, J.K. Simmons. I’ll have time to bang out a review before the 10 pm screening of Todd Miller‘s Dinosaur 13 (same venue), a doc about the government’s grossly Kafka-esque response to the 1990 discovery of the largest, most complete Tyrannosaurus Rex ever found. 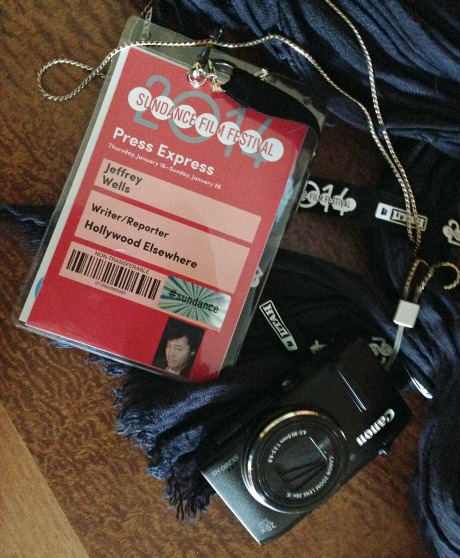 “I don’t think it’s telling stories out of class to say that Scott Rudin phoned me up not long ago to talk about the film’s chances, and he was still trying to be optimistic. What I said to him, though, is this: “Inside Llewyn Davis is a film with treasures that reveal themselves to you upon multiple viewings. It is something that does not gratify instantly and asks for you to experience it a few times, if you’re willing, to discover its density. The Oscar season, I told him, has no patience for this sort of thing. And so it played out the way it did this morning.” — from Kris Tapley’s “lamenting Llewyn” Hitfix piece, posted a couple of hours ago. 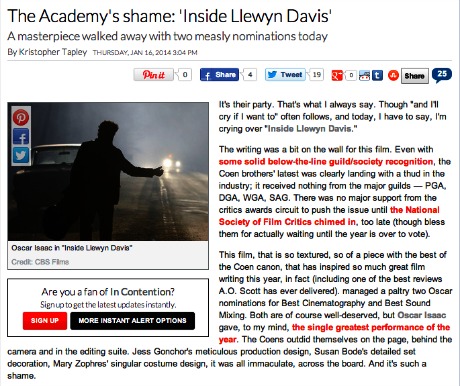 I forgot earlier today to attend the Sundance Film Festival opening press conference, during which festival founder Robert Redford always talks a bit and answers questions. Today somebody asked his reaction to being excluded in the Best Actor race — a race that many believed early on was Redford’s to lose. The truth is that he threw in the towel early on. After giving a few interviews in September and October, Redford never campaigned. He never stepped up to the plate and worked it like Bruce Dern or Matthew McConaughey, possibly because All Is Lost‘s poor box-office had convinced him that a nomination wasn’t in the cards.

Perhaps Redford sensed this himself or perhaps the All Is Lost p.r. guys (David Pollick, Michael Lawson) told him this. And then he wasn’t nominated by SAG for an acting nomination, and that’s when award-season handicappers went “uh-oh, he’s in trouble.” I’d been hearing all along that Academy members either didn’t want to see All Is Lost or they would watch the DVD screener and then turn it off after 20 or 30 minutes.

Redford said at today’s press conference that it was basically the fault of Lionsgate, the distributor of All Is Lost. “In our case, we suffered from little to no distribution,” he said. “I don’t know what they were afraid of. They didn’t want to spend money or they were incapable. We had no campaign to cross over into the mainstream.”

Over the Christmas holidays I rented an Airbnb pad in Manhattan’s Chelsea district. It was actually a very small attic space above a penthouse loft. It had a bed and a desk and a chair and a small table. I couldn’t decide what was more amazing — the fact that the renter, a young woman, had the chtuzpah to charge $150 a night for this little nook or my willingness to pay it. Anyway I stayed there for seven or eight days, but on the fourth day — the night before Christmas Eve — a mishap occured. The desk chair I was sitting in collapsed. I wasn’t doing yoga or handstands or subjecting the chair to any undue strain. I don’t even weigh that much. The chair just said “I quit!” I didn’t tell the young lady immediately because (a) I live in a kind of right-brain dream state and the chair kind of vaporized for a few hours, and (b) I figured nothing could be done repair-wise until after 12.25 anyway.

Better late than never to the Wolf of Wall Street controversy, HuffPost’s Ricky Camilleri kicks it around with RogerEbert.com’s Glenn Kenny, Gawker‘s Rich Juzwiak and comedian Sara Benincasa. Also (after the jump): a discussion of the morning’s Oscar nominations (and yet oddly taped before and the noms were actually announced as well as during) with Out.com’s Michael Musto, film critic Kurt Loder and comedian Amanda Seales. Why not wait and tape a reaction to the nominations an hour or two after they’re been announced?

So American Hustle is going to take the Best Picture Oscar…right? And I’m probably going to win that $50 bucks from Glenn Kenny after all. Or will Gravity take it? I don’t think so. I think the David O. Russell payback factor that I mentioned a long time ago (the quality and popularity of The Fighter and Silver Linings Playbook added to Hustle means he’ll be almost unbeatable) was one of the reasons Hustle took ten nominations. How odd that Russell’s biggest-ever Academy contender is a film that I like and respect but don’t really love.

The Movie Gods want 12 years A Slave to win Best Picture, naturally. As I do. As a lot of people do. Can the softies be guilt-tripped into admitting that the film’s moral force plus the stunning cinematic artistry injected by Steve McQueen and John Ridley overwhelms or at least balances out the cruelty and brutality? I’d like to think so but…

At 23, Jennifer Lawrence has now been Oscar-nominated three times — for Best Actress in Winter’s Bone in 2011 and Silver Linings Playbook last year (resulting in a win) and now for Best Supporting Actress in American Hustle. She’s the youngest actress ever to have been so honored. Plus she’s really rich and hot and everything else. I loved her in Hustle also, but the award should go to 12 Years A Slave‘s Lupita Nyong’o.

Congratulations to the films that landed the most Oscar nominations this morning — 10 for Hustle and Gravity, 9 for 12 Years A Slave, 6 for Captain Phillips, Dallas Buyers Club and Nebraska, 5 for He and Wolf of Wall Street. And extra double triple quadruple congrats to Wolf of Wall Street‘s Jonah Hill, who surprised everyone (even me) with a Best Supporting Actor nomination. Only one smarty-pants Oscar prognosticator — The Hollywood Reporter’s Scott Feinberg — predicted a Jonah nomination. 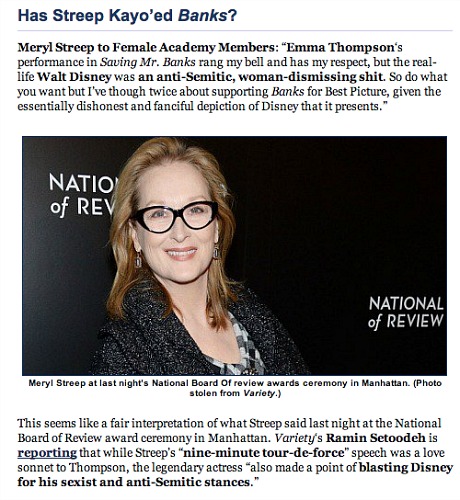