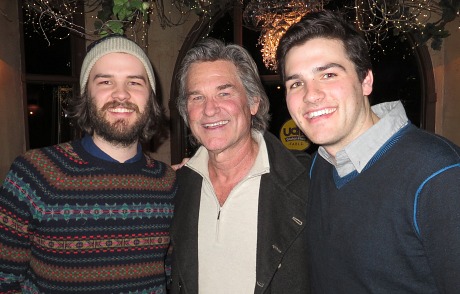 The Battered Bastards of Baseball co-directors Chapman and Maclain Way on either side of Kurt Russell during Monday night’s after-party at 501 Main Street. The dinner was organized/hosted by Melanie Blum’s Next Generation Filmmaker Series.
(More…)
January 20, 2014 6:45 pmby Jeffrey Wells
16 Comments
Damn Goo-Goo Eyes

I’m sorry but Kate Barker-Froyland‘s Song One struck me as way too gentle, delicate and sensitive for its own good. Way. I left after 45 minutes. The part I saw seemed like a musical (i.e., music-augmented) love story in the vein of John Carney‘s Once and Can A Song Save Your Life? It’s about an anthropologist (Anne Hathaway) who is summoned by her mother (Mary Steenburgen) to return to Manhattan to attend to her musician brother, who’s submerged in a coma after a car accident. Before long Hathaway watches an amiable, somewhat famous folk singer (Johnny Flynn) perform at a club. She introduces herself and tells him of her brother’s condition. (The brother has had some kind of vague relationship with Flynn or is big fan of his or something.). Anyway they start going out and attending clubs and sitting on rooftops and making eyes at each other. Goo-goo eyes, actually. After the sixth or seventh time that Flynn looked at Hathaway like a five-week-old puppy, I muttered to myself “okay, that’s it” and I got up and left. No offense.

My recollection of Basil Dearden‘s vividly photographed Khartoum (’66) is that of a tepid and bloodless historical war epic. Not awful but not great. But the film, a 1.22.14 Bluray release on Twilight Time, has three powerful elements. One, Laurence Olivier‘s glint-of-madness performance as The Mahdi, or more precisely his “addressing the troops” scene. (Yes, another semi-ludicrous “white guy playing ethic guy” performance, but obviously crackling with energy.) Two, the fact that it was shot in Ultra Panavison 70, with an aspect ratio of 2.75 to 1. And three, the Bluray reportedly contains the previously censored head-on-a-stick footage that follows the spear-killing of General “Chinese” Gordon (Charlton Heston). 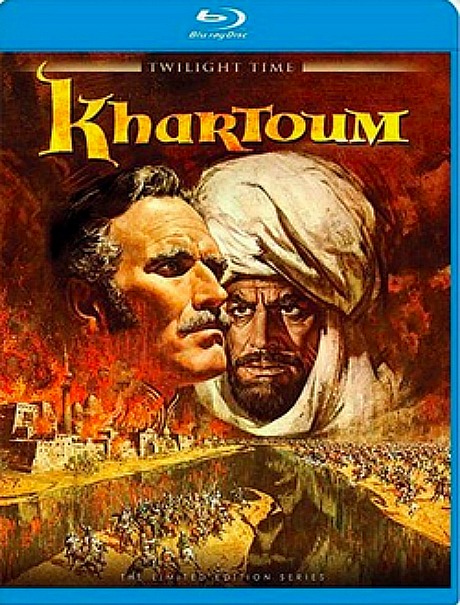 Bill Hader‘s angry, vulnerable, hurting-guy performance in The Skeleton Twins is a career-changer. He’s no longer the SNL smartass who delivers zingy, colorful movie performances on the side. He’s now a real-deal actor who can bore into a character as deeply as any other gifted performer. John Michael McDonagh‘s Calvary, which I saw last night, is basically a wash — static, too dialogue-y, fatalistic, dull. Basically a meditation on the modern Irish soul that says (a) “we’re going wrong” and (b) “those boy-diddling Catholic priests need to pay for their crimes.” I tweeted about Zach Braff‘s Wish I Was Here a couple of days ago, calling it “a little too much into comforting meditations and family-embracing bromides to be comforting or illuminating.” It’s an open-hearted piece, but a little too calculated in that direction” and “pretty much the exact opposite of A Serious Man in a spiritual/philosophical sense.”

Monday, 1.20 at 12:30 pm. I got started an hour later than usual this morning due to crashing at 2 am, which was the fault of Richard Linklater‘s Boyhood beginning around 10 pm last night. I have to leave by 1:30 pm for the pain-in-the-ass Redstone Cinemas (located way out in Kimball Junction) to catch the last hour of Steve James‘ Life Itself, the Roger Ebert doc that I saw the first 65 minutes of late yesterday afternoon and loved — it’s a bluntly truthful, brilliantly made, profoundly touching portrait of a really good guy. Then I have to catch Kate Barker-Froyland‘s Song One, the Anne Hathaway romantic drama, followed by Chapman and Maclain Way‘s The Battered Bastards of Baseball, a doc about Bing Russell‘s minor-league baseball team, the Mavericks. The final film, 9:45 pm at the Eccles, is Gregg Araki‘s White Bird in a Blizzard.

Last Friday Weinstein Co. honcho Harvey Weinstein told CNN’s Piers Morgan that he’s going to stop making films with cynical, exploitation-style violence for its own sake. — i.e., violence as style, violence in air quotes. Doesn’t that mean he and that bloated, over-praised, low-rent hillbilly known as Quentin Tarantino are pretty much done? Is there any major Hollywood director who has demonstrated more conclusively that he’s incapable of making a film without blowing people away or roasting them alive or beating them to death with baseball bats or what-have-you? Tarantino has never written or directed a film that deals with anything intimate or emotional or humanly vulnerable — he basically directs “covers” of ’70s exploitation-style genre films in which bad guys get killed, period. QT is creatively incapable of working outside of that safe little splatter box that he’s been operating out of since Reservoir Dogs.

I’ve long admired the great Richard Linklater and treasured most of his films (the one negative standout being 1998’s The Newton Boys) And like everyone else I felt instantly engaged and intrigued, sight unseen, by the Boyhood concept — i.e., filming the life of a young Texas kid (Ellar Coltrane) and his sister (Lorelei Linklater) growing up with divorced parents (Ethan Hawke, Patricia Arquette) over 11 or 12 years (i.e., ’02 to ’13). Is Boyhood as rich and fertile as it sounds? I saw it last night at the Eccles, all 160 minutes worth, and I have to say “yeah, pretty much” — it’s a remarkably novel, human-scale, life-passage stunt film. I can’t honestly call it staggering or mind-blowing but that’s not a putdown, given what it is.

Boyhood is a mild-mannered thing, and yet obviously a mature, perceptive, highly intelligent enterprise. It’s never less than intriguing or astute or resonant. It feels like a docudrama — acted and written but naturalistic in tone. It grows on you like anything or anyone else that you might gradually get to know over a long stretch, and yet the 160 minutes fly right by. The long-haul scheme of Boyhood naturally gets in the way of what most of us would call a riveting drama. A film of this type is not going to knock you down with some third-act punch. It drip-drip-drips its way into your movie-watching system. And yet anyone who asks, I’m going to tell them “definitely worth catching” and “never seen anything quite like it before” and so on.

It is believed that Academy members (a) don’t watch many award-season movies in theatres, (b) skip chapters or fall asleep when they watch them at home on DVD screeners, and (c) prefer to allow the winners of the guild awards (PGA, SAG, DGA, etc.) to “influence” their vote rather than listen to their own criteria or instincts. Yes, Virginia — Academy members are sheep. And therefore last night’s tie for the Producers Guild Daryl F. Zanuck Award for Outstanding Theatrical Motion Picture, shared by 12 Years A Slave and Gravity, is something of a big deal.

Until last night it was presumed that the sheep could and would probably give the Best Picture Oscar to American Hustle if that David O. Russell film had won the top PGA trophy on the heels of winning the SAG Best Ensemble Award two nights ago (i.e., Saturday, 1.18). Now the woolies are lost and wandering around the labrynthian forest without a shepherd to guide them…baaah! They’re going to have to decide among the top three contenders on their own…baaah!