Whose feet? (Only in a movie would a person just stand there as blood splashes across the tile floor, allowing his/her shoes to be stained.) Whose blood? What film? 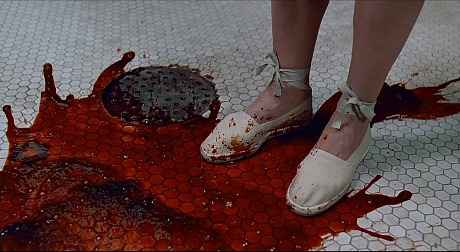 It took an extra day or two but a friend has sent me a PDF of what appears to be a real-deal Hateful Eight script. It’s dated 12.12.13, has the hand-drawn Quentin chapter pages, the first chapter is called “Last Stage to Red Rock,” it has that inimitable under-educated Quentin writing style, it states that “the whole movie” will be filmed in “breathtaking 70mm CinemaScope,” the word “gloriousness” is used on page #1 and there are other errors, I’m sure. Is this a fake also? I don’t want to step into the same shitpile so I’m not saying just yet. And I’m not offering to send it out either. But I am saying I have a newbie. Update: Okay, so Gawker posted it…fine.

The title alone tells you this film is broader and cruder than the kind of film that Sam Rockwell does best in (like The Way, Way Back or Laggies), but it might be passable crap. Maybe. Directed and written by first-timers Geoff Moore and David Posamentier — bad news because young guys always go crude. Olivia Wilde, Michelle Monaghan, Ben Schwartz, Ken Howard, Ray Liotta and Jane Fonda. Concurrently opening in theaters and won iTunes/VOD on 3.14.

Several film sophistos told me to see Pawel Pawlikowski‘s Ida (Music Box, early 2014) at last September’s Telluride Film Festival. Did I listen? Did I at least catch it at the subsequent Toronto Film Festival? Naah — I waited until Sundance. But it met my expectations, you bet. This is one superbly composed, austere, Robert Bresson– or Carl Dreyer-like art film — set in 1962 and shot in black-and-white with a 1.33 aspect ratio. It’s about nuns, vows, cigarettes, fate, family skeletons, sex and sexy saxophones, Nazis and Jews and the grim atmosphere of Communist Poland. And it’s anchored by two understated knockout performances — one by the quietly mesmerizing, ginger-haired Agata Trzebuchowska as a young almost-nun named Anna, the other by Agata Kulesza as Anna’s aunt — the morose, blunt-spoken, hard-drinking, somewhat promiscuous Wanda.

Grindhouse Releasing has a Bluray of Frank Perry and Burt Lancaster‘s The Swimmer (’68) streeting on 3.11. A strange, sterile adaptation of a John Cheever short story that appeared in The New Yorker in July 1964, The Swimmer is easy to admire but all but impossible to like. It has a decidedly cold and spooky vibe. It was shot in the summer of ’66 in Westport, Connecticut — just a town over from Wilton, the leafy hamlet where I was living and half-suffering at the time. I’ve only seen The Swimmer once, but not just because of my own associations — vaguely unhappy memories of failure at school, living under my parents’ rules and regulations, my father’s alcoholism. It’s also that corroded Cheever atmosphere. 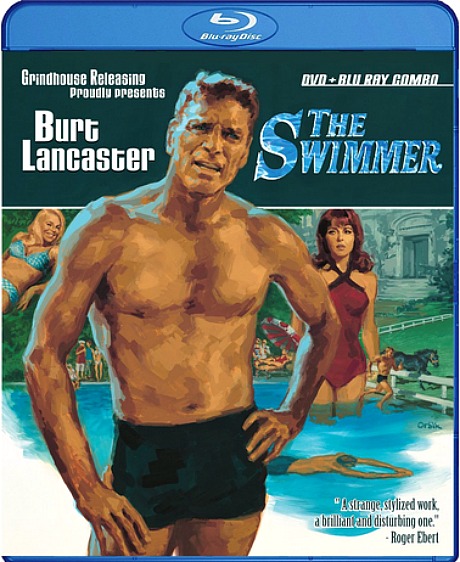 Chicago Tribune entertainment guy Mark Caro has written one of those “Oscar season sure is a long, arduous and costly process” articles. The quote I supplied is nothing new (I’ve expressed it repeatedly since HE began ten years ago) but it’s the only one in the piece with any esprit de corps.

Two days ago Mark Harris posted a Grantland/”Hollywood Prospectus” column that explained why the Academy’s decision to expand the number of Best Picture nominations (i.e., “the Nolan rule”) has conversely led to a smaller pool of films and filmmakers being nominated for Oscars. He reports that 2013’s “major-category nominations — 44 in all — were spread among just 12 films — the fewest in 30 years. [And] the second-lowest number of films represented in the major nominations in the last 30 years — 14 — happened just one year ago. And the third-lowest also happened in the five years since the rule change. The inescapable truth: Best Picture may have gotten bigger, but the Oscars have gotten smaller.”

Why? Laziness. Academy members are “prioritizing” — i.e., not doing their homework by watching enough films, allowing themselves to be led along like sheep by heavily funded Oscar campaigns. “I suspect that the practical effect of a larger Best Picture field is that AMPAS voters now tend to divide the 50-odd DVD screeners they receive [each year] into two piles,” Harris writes. “Movies they ‘should’ see (in other words, the big contenders) and everything else. Guess how often the second pile never gets looked at until it’s too late?”

The thing I dearly love about this ending is the fact that the scummy, mortally wounded Lorren Visser (M. Emmet Walsh) is, at the end of his life, suddenly very concerned about a tiny droplet of water on a water pipe that’s about to drop on his face. It’s not the slug in his stomach, which he can do nothing about. He knows he’s about to go and is even cackling about it, weird guy that he is. What Visser can’t accept is that damn little glob of H20. Taking shape, getting heavier, larger. The water looks down at Visser and he looks up at it. Waiting, waiting…and then it drops.