Over the last decade or so I met and talked with Philip Seymour Hoffman maybe…I don’t know, six or seven times. Never for very long. He was amiable and easy-going enough. I took to calling him “Philly” in print because I once heard Bennett Miller call him that, and I figured what’s good for the goose is good for the gander. He always struck me as having at least a little disgust and anger about the things that educated, civilized people should be angry and disgusted about. He had a vaguely grumpy side. He clearly felt distaste for certain people and things, which of course was a good thing. (“Taste is a result of a thousand distastes” — Francois Truffaut.) But he never seemed like an addict type. I’ve known some self-destructive personalities, and I know a little something about why people allow heroin into their lives. It’s not about “pleasure” but immense relaxation. But Hoffman had so much love and talent and comfort in his life…respected, admired, top of his game. And with three kids, for God’s sake. I just don’t get it. I’m just…speechless. Hoffman had reportedly been struggling with smack. He had tried to get hold of the problem last year, obviously without lasting success. Deep down all addicts believe that brief drug vacations are worth their weight in gold because the idea of living without them seems intolerable. I know what that feeling is. When I had my vodka problem in the early to mid ’90s I used to say and write that “life would be unbearable without alcohol.” That was another life, thank God. Everyone is sad today. To hell with the Super Bowl.

The Santa Barbara Holiday Inn wifi isn’t awful but it takes hours for video clips that are longer than a minute to upload to YouTube. Way too long. Here, finally, 40 hours later, is a good taste of David O. Russell‘s rambling speaking style (or what I described yesterday morning as “a vast lake of free-associating consciousness and tap-dancing, lightning-reflex improv”) during Friday night’s interview with Santa Barbara Film Festival director Roger Durling. Two clips, the second after the jump.

During the 2003 Sundance Film Festival a producer friend was hanging with Phillip Seymour Hoffman, who was doing promotion for Richard Kwietniowski‘s Owning Mahowny, a not-bad-but-not-terrific film about a self-destructive bank manager named Dan Mahowny (Hoffman) who embezzles bank money to cover his gambling debts. Hoffman and a group of five or six (including his manager and agent) went to a special Owning Mahowny party. They were ushered into an upstairs VIP area, but within a few minutes Hoffman said he found the atmosphere odd and artificial and said “let’s walk downstairs and join the real party.” They did so and were quickly ushered into another VIP area, but only Hoffman and one other were allowed past the ropes. His agent and manager were kept out. Hoffman was pissed. He said to one of the goons that “these are my friends and business representatives…and you’re telling me they aren’t allowed in? Are you crazy?” The goon said that only one plus-one was allowed per invited guest. Hoffman said “I don’t need this shit” and left the party with his homies. Some kind of producer or party organizer freaked and followed Hoffman out onto the sidewalk. “Mr. Hoffman! We’re sorry…very sorry!,” he said. “Please…it’s okay…you can bring all your friends behind the rope!” Hoffman said something along the lines of “eff you!” and kept walking. Lesson: Don’t Fuck With The Gods.

Woody Allen is preparing some kind of stern response to Dylan Farrow’s allegations that he sexually abused her at age 7, and perhaps also to the orchestrated hitjob that Mia Farrow arranged through her friend and ally Nicholas Kristof. Variety is quoting an Allen stating the following: “Mr. Allen has read the article and found it untrue and disgraceful. He will be responding very soon. At the time, a thorough investigation was conducted by court appointed independent experts. The experts concluded there was no credible evidence of molestation; that Dylan Farrow had an inability to distinguish between fantasy and reality; and that Dylan Farrow had likely been coached by her mother Mia Farrow. No charges were ever filed.” 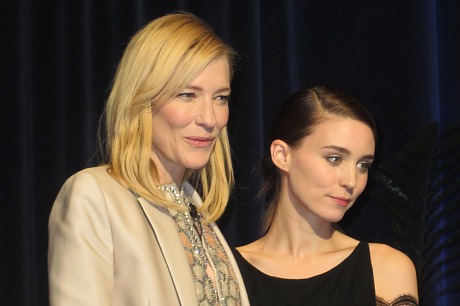 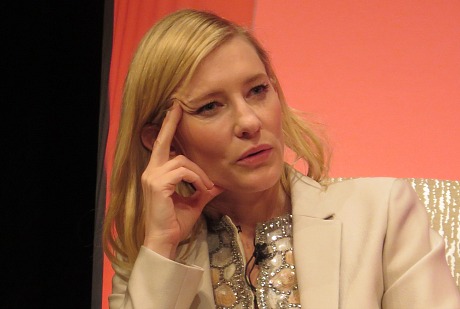 I fell in love with Blanchett — slightly, a little bit — during a roundtable discussion for Steven Soderbergh‘s The Good German (’06), or roughly seven years ago. Six or seven journalists around the table, Blanchett in the middle. Early on she grabbed a pencil and started drawing doodles on a notepad as she answered the questions. I saw the drawing as a kind of escape mechanism, a form of creative withdrawal. It was like something Jackson Pollock might do…loved it! I decided then and there that Blanchett was X-factor and my kind of lady. Three years later I saw her Blanche DuBois in the Brooklyn Academy of Music’s production of A Streetcar Named Desire. Wow.

The Wall Street Journal is reporting that Philip Seymour Hoffman has been found dead in his New York apartment. “The New York Police Department is investigating, and the Office of the Chief Medical Examiner to determine exact cause of death,” the brief story reports. “The official said Mr. Hoffman, 46 years old, was found dead at his apartment at 35 Bethune St. in the West Village neighborhood of Manhattan.” 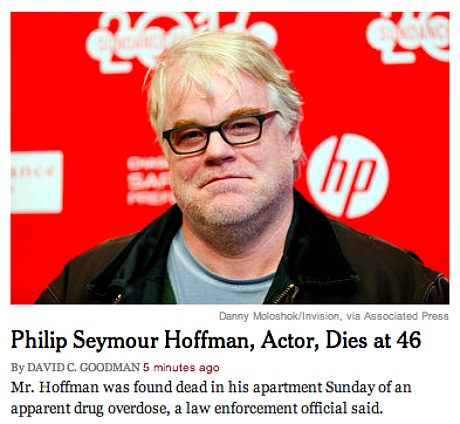 A 5.31.13 L.A. Times story by Nardine Saad stated Hoffman “has left a detox center that he entered to get ahead of drug problems that are said to have been spinning out of control, according to reports. The Master actor revealed to TMZ that he’d [begun] using drugs again about a year ago, starting off with prescription pills then escalating to snorting heroin.

“[Hoffman] said the heroin use only lasted about a week, but he decided to check himself into a detox facility on the East Coast to take control of the problem.”

This is the saddest, most shocking, most cataclysmic loss since the death of Heath Ledger six years ago.

Sidenote: Hoffman’s death was reported fraudently yesterday. Some kind of stupid internet hoax (which it was at the time). Denied, laughed off, more internet b.s.

I was invited to attend the after-party following last night’s Cate Blanchett‘s tribute at the Santa Barbara Int’l Film Festival. Naturally I felt it was fair and necessary to ask her about Dylan Farrow’s letter, published yesterday afternoon by N.Y. Times columnist Nicholas Kristof, accusing Woody Allen of having molested her at age 7. There’s obviously no connection between a 20 year-old family trauma and a recent creative collaboration, but the director-writer of Blue Jasmine and obviously the one most responsible for Blanchett’s Best Actress accolades (including a very real chance that she might win the Best Actress Oscar) was and is under intense fire. With The Hollywood Reporter‘s Scott Feinberg and Awards Daily‘s Sasha Stone suggesting that Farrow’s letter could (however idiotically) work against Blanchett’s Oscar chances, I asked if she had a reaction. I tweeted her response a few minutes later. The Hollywood Reporter‘s Gregg Kilday ran a piece about her quote around midnight. 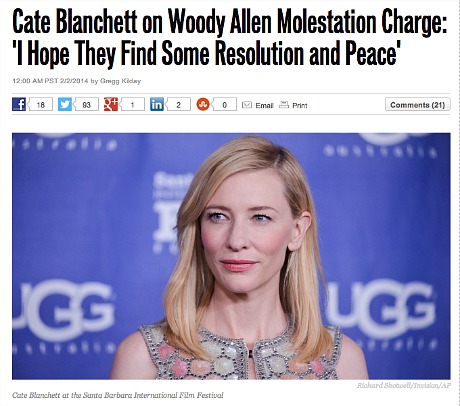