For some reason a no-big-deal snap of Warren Beatty shooting his Howard Hughes film in some modest, middle-class Pasadena neighborhood earlier today has my interest. It was apparently taken by author/screenwriter Sandi Tan, who posted on her Facebook page. Tan also posted a shot of Hughes costars Alden Ehrenreich and Lily Collins relaxing between shots and pondering smartphone distraction. Tan was told by a production assistant that set photography wasn’t allowed so she took a few from inside her home. The secretiveness and the paranoia about snapshots mirrors Hughes’ real-life attitude about same; ditto being observed by outsiders. Beatty is playing Hughes so he’s presumably adhering to character. Beatty’s wife Annette Bening is costarring. 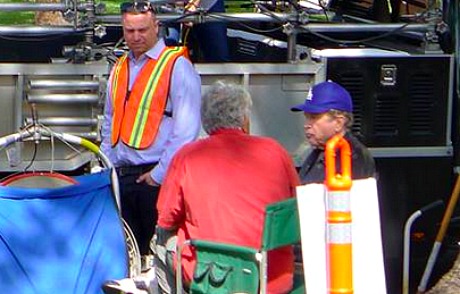 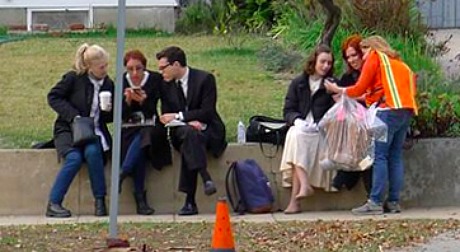 It’s all well and good for HuffPost movie guy Ricky Camilleri and guest Glenn Kenny to talk about 2014 films by major auteurs (as they did seven weeks ago), but remember there are 45 films opening between now and 12.31.14 that I’ve ranked as high-pedigree or respectably second-tier. [They’re listed in the Oscar Balloon box.] And if you add my respectable megaplex tally you’ve got another 15 for a total of 60. Including, as noted earlier today, two from Noah Baumbach and two from Terrence Wackadoodle.

Budgeted at $165 million and change, Michael Bay‘s Transformers: Age of Extinction is the first Shia LaBeouf-less film in the long-running franchise. Everybody got a good payday from this. Mark Wahlberg made like a bandit, I’m guessing. Producers Don Murphy, Tom DeSanto, Lorenzo di Bonaventura and Ian Bryce have also been well compensated. Paramount Pictures is releasing this fourth installment, shot in 3D, on 6.27.14. What do want me to say about this? Nothing. I don’t even know precisely what Dinobots are. I can guess how they differ visually from Autobots, but what’s the point? 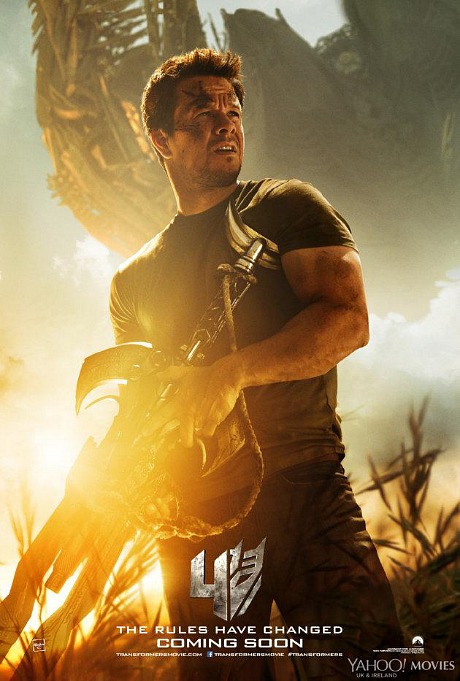 From Broadcast Film Critics Association honcho Joey Berlin: “It has long been noted that voting for the Critics’ Choice Movie Awards is remarkably similar to voting for the Academy Awards. This year, however, the resemblance was simply uncanny. Not only did we have the same winners in the Big Six categories (Best Picture, Director and the acting categories), but our winners were the same in virtually every other category — Original Screenplay, Adapted Screenplay, Cinematography, Art Direction, Costume Design, Editing, Visual Effects, Animated Feature, Documentary Feature, Song and Score. In the categories where we both give awards, the only places where we parted with the Academy were Best Foreign Language Feature and Best Hair and Makeup.” 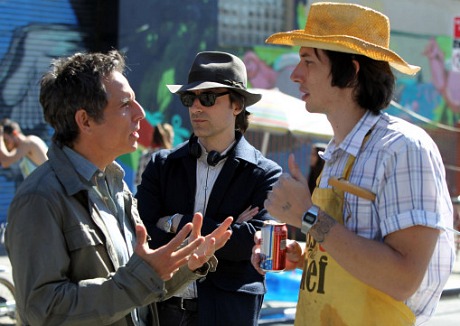 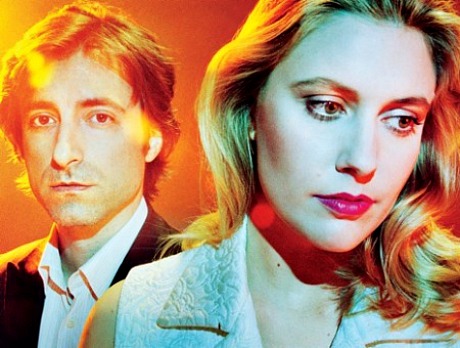 My favorite line of the night came when the Mexican-born Alfonso Cuaron thanked “the wise guys of Warner Brothers.” If he hadn’t corrected himself the implication would have been that the WB guys are a little bit shady, a gang of gamblers and connivers and goodfellas, etc. Which probably isn’t too far from the truth. My heart sank when Cuaron restated himself by saying “the wise people of Warner Brothers!” I prefer to think that “wise guys” was a Freudian slip rather than a mis-applied term, but Cuaron, who is absolutely one of the most articulate guys I know in this town (along with Guillermo del Toro and Alejandro Gonzalez Inarritu), will never cop to this.

“Tonight, there are so many different possibilities. Possibility number one: 12 Years a Slave wins Best Picture. Possibility number two: You’re all racists! Now, for our first white presenter, Anne Hathaway!” An HE colleague asks the following: “Does anyone think maybe, just maybe the producers who hired the ‘safe’ Ellen over an edgier choice would really let her tell what is essentially a Chris Rock joke at the top of the show unless they knew 12 Years A Slave was the winner?” Zadan and Meron could be the new Gil Cates (i.e., they want the gig for years and years), and I don’t think they would let her call the Academy racist ‘in quotes’ unless they knew that joke had a happy ending. Of course they have control over her script. The writers included former SNL people and so I’m sure they threw out some even edgier stuff.” My response: You’re presuming that the Price Waterhouse guys share the results with the producers. But you’re right about one thing — that was a Chris Rock joke, and if he had been hosting and told it instead of Ellen it would have gotten a different reaction.

69 Comments
No One Is Happier But…

For the last five months or so I had been hearing (or hearing about) almost nothing but downish reactions to 12 years A Slave. Particularly from middle-aged and older women. The first reaction I heard anywhere outside my clubby, critical realm was an email from a female screenwriter telling a female friend that she might want to think twice about seeing it, that it’s a rough sit. I never heard anyone speaking disrespectfully of Slave or asserting it wasn’t a good film, but never in my 30-plus years of covering this industry have I sensed less ardor about a Best Picture contender. When a film is likely to win you can always feel the warmth in the room. People like it and are saying so emphatically. You can always feel that current. But not this time.

I was astonished and overjoyed after Will Smith announced last night that Slave had won. It was obviously a very close vote with Alfonso Cuaron taking the Best Director Oscar (and let’s not forget that a good percentage of the Best Picture vote also went to American Hustle), but given what I’d been hearing all along I have to presume that many who didn’t see Steve McQueen and John Ridley‘s film voted for it anyway. They either felt guilt-tripped or they knew deep down, as I suggested in a 1.1.14 advertorial, that they’d be feeling a ton of morning-after regret (and therefore badly about themselves) if they gave the Best Picture Oscar to a space-ride thriller. And so Slave squeaked through.