Nobody is more queer for behind-the-scenes color photographs of classic black-and-white films than myself…nobody. I guess I hadn’t looked hard enough but until this evening I had never laid eyes on a genuine color shot (i.e., not tinted monochrome) taken during the filming of Alfred Hitchcock‘s Notorious…not one. 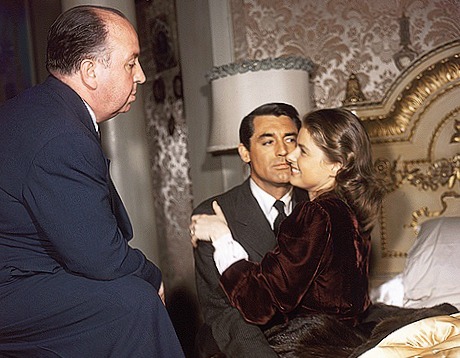 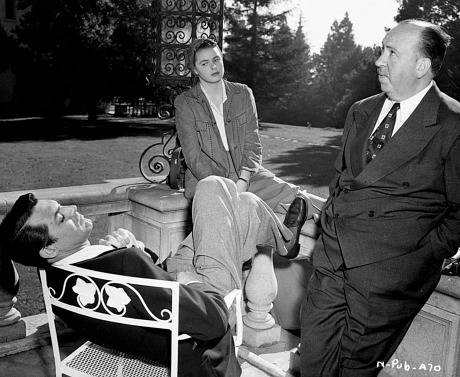 As one who’s been made to feel uncomfortable by the problematically bulky Jason Segel being on the verge of serious beefalo for several years (beginning with that repugnant nude scene in Forgetting Sarah Marshall), I must extend a crisp salute of respect to Segel for having trimmed down considerably for Jake Kasdan‘s Sex Tape (i.e, formerly Basic Math), which Sony will debut on 7.25. The obviously insubstantial comedy costars Cameron Diaz, Rob Corddry, Ellie Kemper, Rob Lowe and Jack Black.

Stanley Kubrick‘s cinematic eye was influenced by his having shot thousands of stills for Look magazine, of course, but more primally, I’ve read or discerned, by the framings of Sergei Eisenstein. (I’m thinking particularly of Que Viva Mexico!) I swear to God that every time I take a photo or a video clip I’m always framing like Kubrick and Eisenstein. Exactly like, I mean. Same shape, balance and focal point. John Ford‘s visual aesthetic was never quite this balanced and centered, but…well, that was Ford. (Source: Kogonada.com)

Peking (5.29.63) is a visually handsome but mostly mediocre film. It was a commercial stiff, and proved to be the first stage in the downfall saga of producer Samuel Bronston, who was finally finished off by the disappointing revenues from The Fall of the Roman Empire and Circus World (released within four months of each other in 1964). Two non-Asians play significant Asian roles (Flora Robson as Empress Dowager Tzu Hsi, Robert Helpmann as Prince Tuan). And poor self-destructive Nicholas Ray collapsed during filming, and in so doing wrecked his career.

And yet, like an idiot, I’ve bought the French Bluray anyway because of the following passage from Gary W. Tooze‘s DVD Beaver review: “This was restored in 2013 from the 8-perf Super-Technirama 70 camera negative. I’m blown away by the image — the 1080p looks incredible — a gigantic upgrade from the DVD. [Plus] it’s region-free and the French subtitles are totally removable. Look at the colors and detail — wow! The Technicolor bursts off the screen at times. Detail, skin tones, depth…all looking tremendous!”

“Even though it stretches to nearly two-and-a-half hours and concludes with an extended gun battle, by the time Divergent ends it still seems to be…clearing its throat. Blame it on burdensome commercial expectations, perhaps: Adapted from the first novel in Veronica Roth’s blockbuster YA series, this film has clearly been designated an heir apparent to Summit-Lionsgate’s massively lucrative teen-targeted Twilight and Hunger Games properties. Yet director Neil Burger seems so concerned with laying franchise groundwork that he neglects to create an engaging standalone movie, and Divergent‘s uncertain sense of setting, bloated plot, drab visual style and solid yet underwhelming lead turns from Shailene Woodley and Theo James don’t necessarily make the best case for series newcomers.” — from Andrew Barker‘s 3.16 Variety review.

The depression that followed James Cameron‘s commitment to deliver not one or two but three Avatar sequels, planned for release in 2016, 2017 and 2018, was fairly profound. Three sequels? It used to be that major-league directors made films because they were excited by some challenge or because they were aroused by certain echos or themes or metaphors in the material. Now, it seems, they’re just following the cash because corporate franchise movies are regarded by zombie production executives as the only safe bets. James Mangold recently announced he’ll be doing another effing Wolverine movie after helming X-Men Apocalypse. Why? Because the market allegedly wants these films and he’s going for the dough while the getting is good. (Which puts Three Little Words and The Deep Blue Good-by on back burners.) Which name-brand directors have respectfully passed when presented with an opportunity to direct a sequel for a handsome paycheck? “Sorry but I can’t make a movie just to make money…I have to feel a certain degree of genuine passion”…who has said that over the last 20 or 25 years?

Six days after my 3.11 “Monster of Nothingness” piece about the surreal disappearance of Malaysia Airlines Flight MH370, some CNN guys flirted with the notion of a supernatural explanation. But that’s old news. The new thought is that the pilot and his co-pilot are/were nutters who used a “terrain masking” procedure to avoid radar: “Malaysia Airlines flight MH370 dropped to altitudes as low as 5000 feet, using a dangerous flying technique called ‘terrain masking’, to avoid radar in at least three countries, investigators believe. Terrain masking is used by military pilots for stealth flights.” — Lindsay Murdoch, Sydney Morning Herald.

This morning’s earthquake wasn’t that strong, but it was cool. A lousy 4.4 on the scale and candy-asses were going “whoa, why do I live here?” More importantly, why do L.A. quakes almost always happen in the early morning? The ’94 quake was historic. I remember the blue-white flash of electric juncture boxes being dislodged. And then, hours later, being told by Entertainment Weekly to gather reactions from industry hotshots. Warren Beatty‘s was the best: “It gives us cause for the pause that we all should be taking anyway.”