Lisa and Louise Burns (a.k.a., the Grady twins from The Shining) attended a a BFI 50th anniversary screening of Stanley Kubrick‘s Dr. Strangelove about six weeks ago in London. They’re in their mid 40s now, but (a) I honestly don’t see much of a resemblance and (b) I can’t match either one with their younger selves. They looked frosty and malevolent as kids and now they look like ladies who lunch in Madrid. 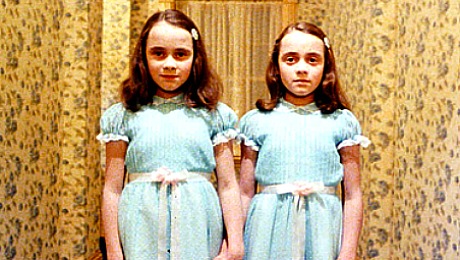 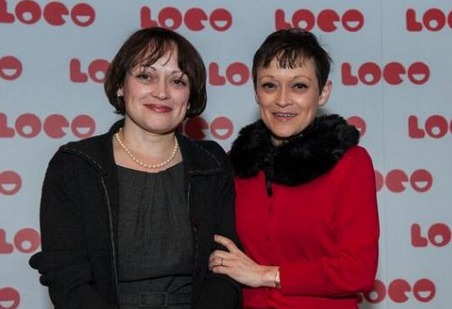 The great cinematographer and noted John Huston collaborator Oswald Morris has passed at age 98. Morris is best known for creating highly idiosyncratic color schemes for Huston’s Moulin Rouge (’52), Moby Dick (’56) and Reflections in a Golden Eye (’67). Rouge featured a rosey watercolor palette that recalled the paintings of Toulouse Lautrec. Moby Dick used a desaturated color-mixed-with-monochrome look (Bosley Crowther called it “strange” and “subdued”) that was inspired by Currier & Ives etchings. Golden Eye was colored with sickly yellow-pinkish hues. Morris also shot Huston’s Beat the Devil (’54) Heaven Knows, Mr. Allison (’57), The Mackintosh Man (’73) and The Man Who Would Be King (’75). He also shot Look Back in Anger (’59), The Entertainer (’60), The Guns of Navarone (’61), Lolita (’62), Of Human Bondage (’64), The Spy Who Came in from the Cold (’65) and Sleuth (’72). 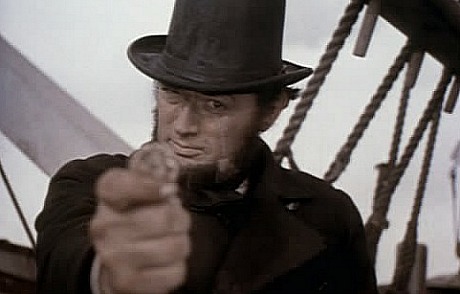 A Bluray of Martin Scorsese‘s The King of Comedy (’83) is out later this month. Why haven’t I re-watched this film during the 31 years since it first opened? Because even though I completely agree with (or would certainly never argue against) the notion that it’s among Scorsese’s best, it’s never been and never will be a pleasant film to watch. It’s great and prescient but at the same irritating and almost ghastly at times. Except for the “you should get cancer, I hope you get cancer!” bit on the streets of midtown Manhattan.

Last fall I finally bought the 2012 British DVD of Ken Russell‘s The Devils (’71), but I never watched it. One of my motives in getting it was that I wanted to see the fabled “rape of Christ” sequence that was cut from the theatrical version. And then last night there it was, a Youtube clip posted by “Berg”, in the comments section under the “Houston Movie Fan Killed Over 300 Dispute” story. It’s one thing to watch this sequence in the context of Russell’s film and another to view it as a stand-alone. In the latter regard it’s the first excerpt from a mainstream big-studio film that I would actually call demonic. I despise Christians but even I understand why they would be appalled by this. I actually agree with the 43 year-old decision to cut it out. I never thought I’d hear myself say such a thing.

In my realm of projected passion, Elizabeth Warren would next year announce her candidacy for President and compete for the nomination with the right-of-center Hillary Clinton. Someone who’s emphatically not in the corporate pocket and who (unlike Obama and almost certainly unlike what Hillary will do if she’s elected in 2016) wants to rally the country into doing something about income inequality has to run, if for no other reason than to move the conversation in that direction. Last December Warren said she’ll serve out her six-year term as Massachusetts Senator but that’s not binding in the least. Warren would be a far healthier choice for President than Hillary.

Deadline‘s Mike Fleming is reporting that the Noah guys — star Russell Crowe, director Darren Aronofsky and Paramount vice-chairman Rob Moore — managed some face-time with Pope Francis today in Rome “after the Vatican extended an olive branch and hosted the trio in the official VIP section of this morning’s Udienza.” The photo below is fine but…I’m presuming that a thumbs-up group shot with the Pope would have looked unseemly. I’m also presuming that the people around His Holiness urged him to maintain a certain distance, perhaps out of concern that Old Testament literalists who might (I say “might“) be displeased with the film will transfer their resentment to him. 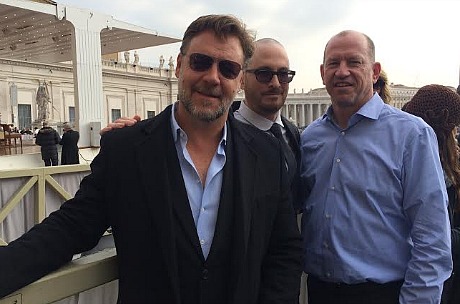 6 Comments
Drops In The Well

There’s a 3.18 N.Y. Times story by Jenna Wortham about a five-week-old app called Secret, basically an anonymous forum for any topic. “For me, it’s nothing more than what you would see etched on a bathroom wall,” venture capitalist Mark Suster tells Northam. There’s also that Paul Simon lyric about words “written on subway walls” being of some value. Anonymity brings out cruelty and contempt but also strains of truth. The 98% anonymous Hollywood Elsewhere comments testify to that. I’m presuming/expecting that more Hollywood-centric comments will eventually appear on this app. 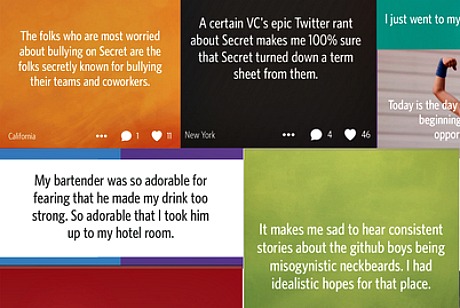 With Nymphomaniac, Vol. 2 about to open, I thought I’d revisit the Shia LaBoeuf press conference walkout moment at the Berlin Film Festival. (His departing statement: “When the seagulls follow the trawler, it’s because they think sardines will be thrown into the sea. Thank you very much.”) LaBeouf’s pronunciation of “seagulls” is curious — he calls them “siegels” as if he’s describing a large family related to Ben Siegel. The second syllable of “seagull” rhymes with “dull.” The question that prompted his walkout came from Tatiana Spinu of Columbia’s W radio.

The vaguely predatory vibe in this just-popped trailer for Phillip Noyce‘s The Giver (Weinstein Co., 8.15) speaks for itself. The unknown faces of the young leads (Brenton Thwaites, Odeya Rush) are a mild stopper but then along comes Meryl Streep in that Pocahantas hippie-momma wig and we’re off to the races. And then a guttural voice of foreboding from producer/costar Jeff Bridges. Somewhat darker and less baroque than The Hunger Games — a rigged, chilly feeling. Bridges: “The way things look and the way things are, are very different. I cannot prepare you for what’s going to happen.”