I posted this same clip on 6.18.13. I’m assuming a certain percentage of the readership missed it. I may decide to re-post this clip every year at this time. It’s soothing and nurturing to watch this shot every so often. When’s the last time a long dazzling uncut shot like this was the talk of film buffs the world over? 95% of those who live for CG-driven films would never even watch a film like The Passenger and therefore never contemplate a perfect scene like this, but if they did most would sit there like metal lawn furniture and go ‘uhhm, okay…so that’s it?’ But these same spiritual journeymen would sit through the forthcoming movies based on Peeps and It’s A Small World and Barbie.

We’ve all vented about the Barbie, Marshmallow Peeps and “It’s A Small World” projects that were announced a couple of days ago. And so the Jeff Sneider/”What’s The Deal?” remark that really pops out comes at 1:06, to wit: “Disney is also very worried about the Angelina Jolie movie, Maleficient (Disney, 5.30). Which I hear has everybody on the lot muttering under their breath, ‘Thank God for Frozen.'”

I wanted a little bit of a Bluray enhancement “bump” from the just-released Warner Home Video Bluray of Mike Hodges‘ Get Carter (’71)…and I didn’t get it. That’s because the WHV technicians who did the remastering said “to hell with it…this is a gritty, low-budget ’70s film, and the best we can do is basically replicate the look of the DVD but with enough of a bit-rate upgrade so it’ll look suitably filled-out on a 60- or 70-inch screen.” What I was looking for was a little sweetening — the kind of tasteful DNR finessing that the guys at Universal Home Video would have applied if Carter had been their film. The Carter Bluray looks fine, mind. It just looks the same as the 2000 DVD, and I wanted more than that. 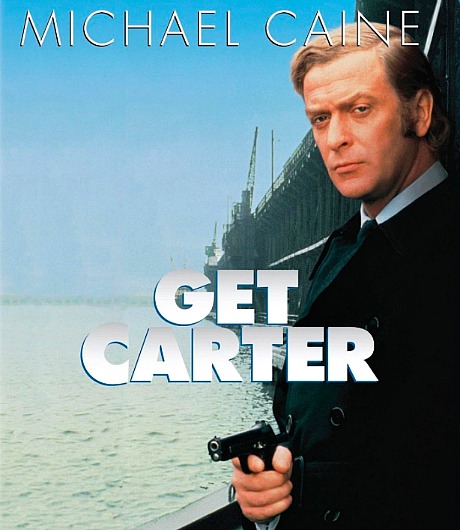 Steven Knight‘s Locke, which I creamed over earlier this month, has a 79% rating from Metacritic and a 100% Rotten Tomato rating if you isolate the top critics. It also seems clear that Tom Hardy has made his bones sufficiently to be in the running for a Best Actor nomination eight and nine months hence. 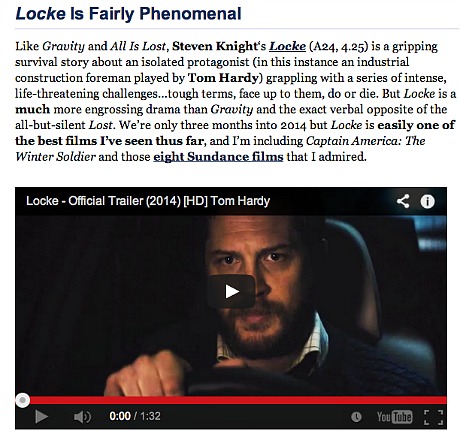 For the most part the Rotten Tomato and Metacritic scribes despise Nick Cassevetes‘ The Other Woman, having given the 20th Century Fox release a 24% and 38% rating, respectively. The only guy who shares my view, which is that Woman is no classic but on the other hand isn’t too bad, is Boston Herald critic James Verniere. Regardless of all this, Box-Office Mojo is predicting a half-decent $15 million weekend, so the Other Woman trailer that I disliked for making a reasonably engaging, not-too-bad comedy seem a lot dumber than it is, is apparently doing its job.

Incidentally: I’m told by a Fox source that nobody made the trailer I was beefing about, which came out last December. Departed Fox marketing chiefs Oren Aviv and Tony Sella were gone when it was released (Sella apparently never even saw the film) and current marketing boss Marc Weinstock hadn’t really arrived and settled in. So the trailer kind of…I don’t know, manifested on its own volition? Something like that.

Gene Fowler, Jr.‘s I Married a Monster From Outer Space (’58) is a typical ’50s sci-fi invader-metaphor flick in the vein of Don Siegel‘s Invasion of the Body Snatchers (’56) and Invaders From Mars (’53). But if you (a) consider that star Tom Tryon (who later became a successful author) came out of the closet in the late ’60s and (b) momentarily regard homosexuality as a metaphor for the social convulsions of the ’60s and ’70s, I Married A Monster From Outer Space could be interpreted as being about the unravelling of staid middle-class normality and the coming of social upheavals that would begin to disturb American culture around ’63, or five years after its release.

Wiki synopsis: “The story centers on freshly married Marge Farrell who finds her husband Bill strangely transformed soon after her marriage: He is losing his affection for his wife and other living beings and drops various earlier habits. Soon she finds out that Bill is not the only man in town changing into a completely different person.”

In my 4.23 story about the forthcoming Paramount-MGM remake of Ben-Hur (“William Wyler Turns In His Grave“), I used all my gunpowder trashing the hiring of the vulgar, sloth-like Timur Bekmambetov (Wanted, Abraham Lincoln – Vampire Hunter) to direct. In so doing I overlooked Paramount’s signing of rightwing Christian producers Mark Burnett and Roma Downey (The Bible miniseries, Son of God) to guide the production. This is even more sickening. The idea of selling Ben-Hur to “faith-driven consumers” is just as phony a sales pitch as the one used when the original Ben-Hur author, General Lew Wallace, called his book “A Tale of the Christ.” As screenwriter Gore Vidal explained in a “Making of” documentary about the 1959 version, Ben-Hur is the story of unrequited love, betrayal and revenge between a Jewish boy and a Roman boy. Rage and bitterness are washed clean at the finale by Christ’s blood trickling into a stream, fine…but Ben-Hur never would have never been made into a film if the character of Judah Ben-Hur had followed the Nazarene’s teachings. If Judah (Charlton Heston) had returned from Jack Hawkins’ villa in Rome and decided to turn the other cheek and forgive Messala (Stephen Boyd) after learning that his boyhood friend had condemned his mother and sister to prison and the scourge of leprosy (instead of doing what he does in the film, which is to challenge and then defeat Messala in the chariot race, which results in Messala being trampled to death by horses), Ben-Hur never would have gotten the go-ahead. So don’t give me any of this religious thematic crap because Ben-Hur is about having your cake (i.e., sweet revenge) and eating it too (i.e., being re-born at the finale).

“Here’s a presumably needless reminder that we’re all gathering at La Pizza on Tuesday, 5.13 around 7 pm or thereabouts…right?,” I said this morning in a mass mailing. “Just like last year and the year before that. The tone will be somewhat funereal this time as Cannes 2014 stands a good chance of becoming the most underwhelming in history. I weep when I think of all the films that could and should have played there. When Thierry Fremaux announced the competition titles I heard Peggy Lee‘s “Is That All There Is?” gently playing on the soundtrack. Just to avoid the usual confusion, everyone should meet upstairs in the big room.” 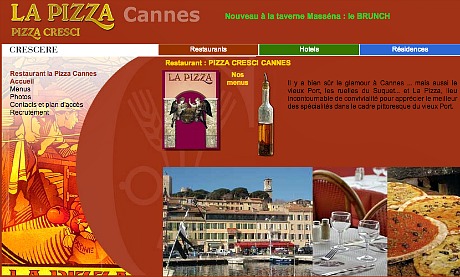 Esteemed critic to Wells: “Can I bring Naomi Kawase so you can tell her how much you’re looking forward to her new film (i.e., Still The Water)?” Wells to Esteemed Critic: “Okay, sure, but it wasn’t me who said ‘Naomi Kawase again‘? That was a blind quote run by Justin Chang in his Variety piece about Cannes hype and hate.’ Still The Water sounds like a snooze but all I officially said about it was ‘no comment.'”

Two days ago an IFC Films trailer for Richard Linklater‘s Boyhood (7.11) appeared, and then somebody (an attorney, I’m guessing) had it taken down, and now it’s up again. I really don’t care for these indecisive little delay games. When you release a trailer just put the damn thing up on YouTube already. No fiddle-faddling, no second thoughts, no attorneys, no Apple exclusives — just let the fucker circulate and find its own footing.

I still say Linklater should have ripped off Joseph Conrad and called it Youth instead. Because then it wouldn’t just apply to Ellar Coltrane‘s Mason character but also to his sister Samantha, played by Lorelei Linklater, who grows up before our eyes with the same degree of fascination. The gradual aging of their parents, Ethan Hawke and Patricia Arquette (in their early 30s when Boyhood began filming, in their mid 40s when it wrapped), would be another echo.

There’s an allegedly cruddy-looking German Bluray available of Otto Preminger‘s The Cardinal (’63), which I have no interest in seeing. The Cardinal was one of Preminger’s plodding auto-pilot films. But I’ve always loved Saul Bass‘s poster art. Bass presumably hated the rote, dreary sound of the title. How do you make a film called The Cardinal seem interesting or exciting? So Bass created a new film called THE Cardinal. I never want to see this alleged mediocrity (N.Y. Times critic Bosley Crowther wasn’t the only one to think so) which turned out to be a kind of simultaneous summit-and-death blow to Tom Tryon‘s career, but I’ll always love that big THE. 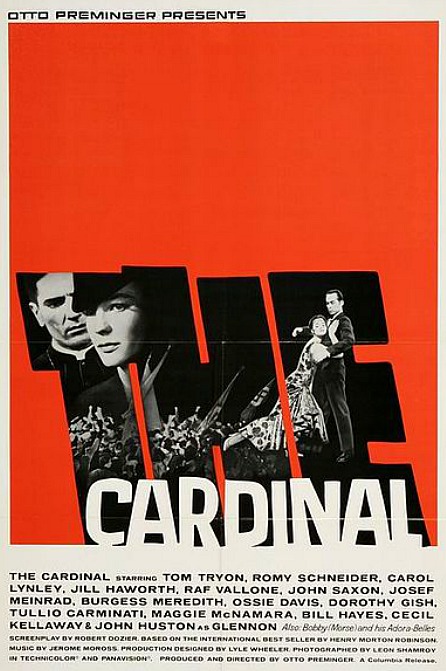