Now I don’t even have to see Ryan Gosling’s Lost River. The trailer makes it quite clear that this reputed “fantasy thriller” suffers from the good old “trying too hard” impulse that many first-time-filmmakers succumb to. It may be somewhat influenced by Rubber‘s Quentin Dupieux, but it’s probably going to suck eggs. I’m obliged to see it, of course (Tuesday afternoon, 2 pm, Salle Debussy) but I have a pretty good idea what this is going to be. We all do. Iain de Caestacker plays the sensitive-faced son of Christina Hendricks. The “look at my muscles!” guy is Matt Smith. Also featuring Eva Mendes, Saoirse Ronan, Ben Mendelsohn and Barbara Steele.

Earlier this evening I stood uncomfortably rock-still for a good 30 minutes outside the Salle Bunuel for a 7:30 pm screening of Pablo Fendrik‘s El Ardor, which, by the way, is slow and uninteresting. We had to wait a good 15 or 20 minutes longer than we should have because a screening of Steve James‘ Life Itself, the excellent Roger Ebert doc, ran late. And then instead of the crowd exiting when the doc was over, James and Chaz Ebert (i.e., Roger’s widow) apparently decided to have a nice leisurely q & a inside while a couple of hundred people outside melted and suffered. The air began to lose sufficient oxygen, the body heat was oppressive, and the crowd was getting angry and unruly. “That’s Cannes,” a British journalist told me. “That’s how they do things here. Get used to it.”

Yesterday the N.Y. Post‘s Susan Edelman revealed a list of tacky knick-knacks being sold at the new 9/11 Museum Gift Shop. Included are (a) FDNY, NYPD and Port Authority Police T-shirts and caps, (b) earrings molded from leaves and blossoms of downtown trees, (c) cop and firefighter charms by Pandora and other jewelers; and (d) “United We Stand” blankets. Not to mention 9/11 bracelets, bowls, buttons, mugs, mousepads, magnets, key chains, flags, pins, stuffed animals, toy firetrucks, cellphone cases, tote bags, books and DVDs. “Even FDNY vests for dogs come in all sizes,” Edelman reports. Why don’t they sell photos of dead jumpers while they’re at it? What gets me is that visiting adults have to pay $24 to even get into the store. What’s the difference, I’m wondering, between this and similar items (tasteful scale models of prisoner barracks, little Nazi ashtrays, little toy Doberman Pinschers) being sold in a gift shop at the Dachau and Auschwitz museums? 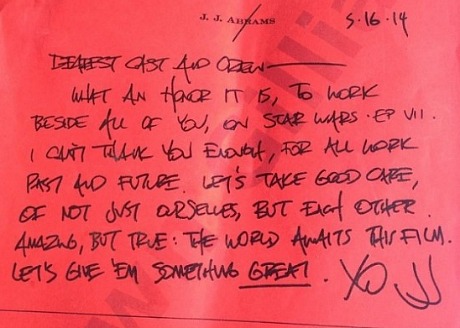 Here are three mp3s from this morning’s Foxcatcher press conference, which was attended by (left to right in pic below) Mark Ruffalo, Channing Tatum, director Bennett Miller, Steve Carell, producer Megan Ellison. Here’s the entire press conference, start to finish. At one point Chaz Ebert asked Miller about having gotten exceptional performances not just from his Foxcatcher cast but particularly from the late Phillip Seymour Hoffman, whom Miller directed in Capote — here’s his halting emotional response. A little later on Miller explained that you can capture a world or a situation with a telescope or a microscope, and that Foxcatcher uses the latter approach. 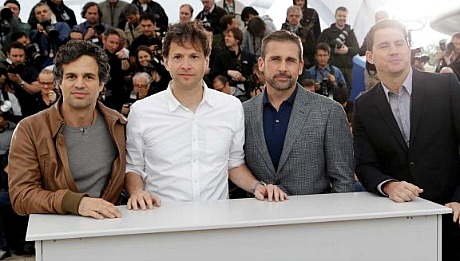