20 Comments
Festus Sucks It In

Mr. Ford is alluding to his recent on-set ankle fracture. He’s also quoting Han Solo’s famous boast. The Kessel Run “was an 18-parsec route used by smugglers to move glitterstim spice from Kessel to an area south of the Si’Klaata Cluster without getting caught by the Imperial ships that were guarding the movement of spice from Kessel’s mines,” it says here. Except a parsec is a unit of distance and not time so I still don’t get it. 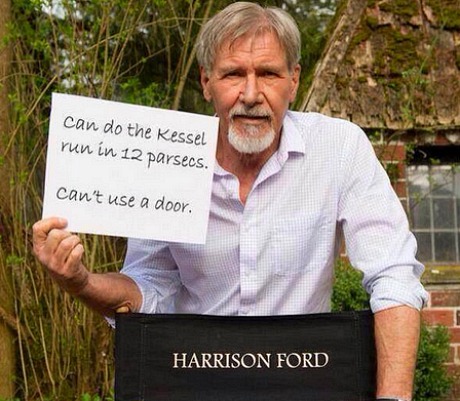 Last November I bought the Eureka Entertainment/Masters of Cinema Bluray of Howard Hawks‘ Red River (’48). I mostly hated it — at best it looked unexceptional and too much of it was covered in Egyptian mosquito grain. Three days ago I bought Criterion’s Red River Bluray. I naturally expected it to be just as grainy as the Masters of Cinema version…how could it not be? No other video distributor has worn the grain badge more proudly or persistently than Criterion. Their devotion to grain structure (a high-falutin’ term that basically means “presence of digital mosquitoes”) has caused me much anguish over the years. Anyway, I popped in the Criterion Red River and…astonishing. It has next to no bothersome grain, and the images seem deeper, sharper, cleaner. By my sights it’s certainly more handsomely realized than the Masters of Cinema version. The details are delightful, magnificent. I’m genuinely surprised. Hats off to the Criterion team. Oh, and I didn’t like (and will never again watch) the somewhat shorter version which Walter Brennan narrates. I don’t care if Hawks preferred this version. I know what’s best. 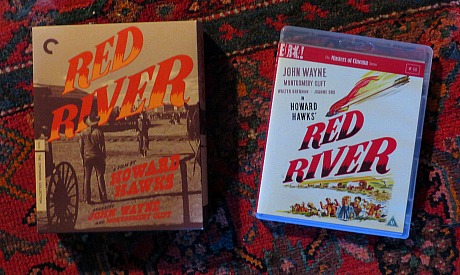 In a 6.12 interview with Toronto Star critic Peter Howell, Clint Eastwood admits to being “amused that one of his more recent movies, Gran Torino, has spawned a catch praise that’s almost as popular as Dirty Harry’s ‘Go ahead, make my day!’ line from Sudden Impact. The line is ‘Get off my lawn!,’ barked by Eastwood’s grizzled Korean War vet Walt Kowalski in Gran Torino. “Yeah, I can’t control all that,” Eastwood says. “If it has that kind of impression, then it’s a compliment — a left-handed one, at least.”

About ten years ago a prominent director-actor told me that Eastwood was the source of another famous line — “Show me a beautiful woman and I’ll show you a guy who’s tired of fucking her.” Maybe not the original source but he said he’d heard it from Eastwood (or perhaps had been told Eastwood had said it) back in the ’70s or ’80s. I naturally believed him but now I’m thinking that line has probably been attributed all over the place so who knows?

In the following order, the Best 2014 Films That I’ve Seen Thus Far (regardless of forthcoming or undetermined release dates for those seen at Sundance, Berlin and Cannes) are as follows: