I sat down a few days ago with Dawn of the Planet of the Apes director Matt Reeves at the Four Seasons. Here‘s the discussion. Reeves has a kind of joyous intensity about him — you can hear that pretty plainly. He expounds about some of the ideas and elements that went into Dawn and that’s fine, but there’s a Reeves metaphor that tells you more about the film, in a sense, than what he might say about it. During the exhaustive editing of Dawn, Reeves said, he decided to become a dapper (dare I say fastidious?) dresser, specifically a wearer of bow ties. It’s understood that Reeves, also the director of Let Me In and Cloverfield, is quite admired by the ComicCon crowd and guys like Harry Knowles. But the bow tie and the black polka-dot handkerchief in his breast pocket [after the jump] should tell you Reeves is not really “of” that realm and that crowd. And so the many ingredients, noticable and perhaps not-so-noticable, that Reeves has put into Dawn in order to make it special and distinctive are not “ComicCon-ish” (whatever you might imagine that term to mean) or particularly aimed at trying to please those enthusiastic but nonetheless low-rent geeks who congregate in San Diego every July. Reeves, in short, is up to his own game and singing his own tune. That’s all I’m saying, really. 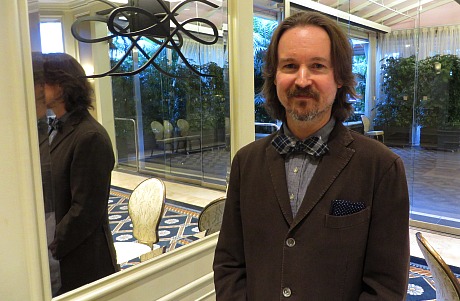 A couple of weeks ago I bought some distressed black-leather motorcycle saddlebags for the new hefty-sized black Yamaha scooter. The fact that the bags were old and quite worn-down and looked like John Wayne might have used them during the shooting of Red River are what made them cool. It’s very hard to find Tom Dunson saddlebags today because 99.5% of today’s motorcycle owners prefer foo-foo metrosexual leather bags with a shiny showroom lustre and metal studs and complex stitchings that might have been designed by Vera Wang or Ozwald Boateng. 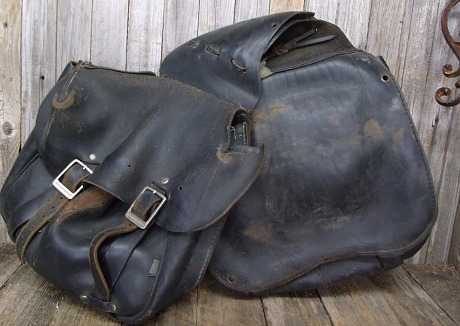 The original John Wayne saddlebags as offered by Rusty Chicken of Austin. 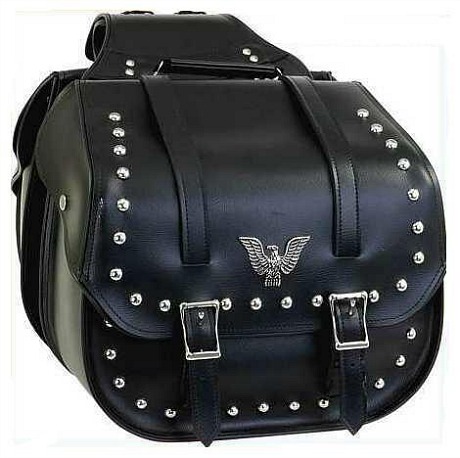 But guess what? The people in Austin who sold me the beat-up bags (they’re known as Rusty Chicken.com) cancelled the order and tossed the bags, they said, because they’re too dusty or grubby-looking or something like that.

When Hollywood Elsewhere is finally able to provide live, as-it-happens Google Glass coverage of various movie-related events and encounters, accompaniment could be provided by the just-announced Airdog drone. The idea would be to occasionally have a video camera autonomously follow me from 50 or 100 feet up as I walk along the Croisette in Cannes or bike to the Four Seasons for an interview or drive to the Arclight for a screening. The Airdog has a camera-equipped stabilizing rig, can fly for about 10 to 15 minutes on a single battery and can travel up to speeds of roughly 40 mph.

I saw Oliver Stone‘s Born on the Fourth of July tonight at the Aero. I was floored and close to tears when I first saw it in 1989, but now…well, it’s still very emotional and emphatic but it would have been a better film, I think, if it had been a tiny bit dryer and quieter from time to time. The angry cup runneth over…shouting, blood, saliva, spilled urine…but it cares and hits like a punch. I’m thinking particularly of the haunted look on the face of an older armless veteran during a 4th of July parade in Massapequa. I still find it a bit irritating (as I did 25 years ago) that not once does Tom Cruise‘s Ron Kovic ever mention what a huge strategic and political miscalculation the Vietnam War was, and how our belief in the domino theory led to horrific slaughter and the unleashing of the furies. All Cruise/Kovic ever says is that waging war and killing civilians carries bad karma, and that being turned into a paraplegic made him very, very angry — a lament that any World War II or Civil War or Korean War veteran could have shared. Cruise was 26 when Born was made, but during the first third he looks around 18 or 19 at most. And yet costar Willem Dafoe hasn’t aged much at all. Stone and Kovic spoke for about 25 minutes before the screening; both were greeted with standing ovations.