With tonight’s much-dreaded fourth episode of The Leftovers lying in wait like a python, here’s a line from Bill McCuddy that got a decent laugh at Caroline’s the other night: “That two percent of the population taken from the planet in HBO’s The Leftovers apparently included all the good screenwriters.”

I would be a devoted fan of a weekly half-hour cable show about chimps indicating their reactions to new movies. I’m serious. You know everyone would watch it. You can’t beat the metaphor. We all know chimps are reasonably good communicators and that they could somehow convey their reactions to this or that aspect of a new film, perhaps with visual aids or gestures or whatnot. We’re talking about New York-based chimps who would get themselves on screening lists (obviously with the help of human handlers) and attend viewings along with Lou Lumenick, Josh Horowitz, Matt Zoller Seitz and Armond White. In fact…wait, wait, wait…human and chimp critics dishing side by side? Don’t kid yourself — this would be hugely popular.

Every now and then I read another doom-and-gloom piece about the summer’s disappointing (i.e., not as good last year’s) box-office performance. “Downward spiral,” “big drop,” etc. The top ten films so far have grossed $130 million vs. $174 million last year. 2014 is down 6% from 2013. Could that have something to do with a mortifying awareness that the majority of summer movies are intended to be downmarket CG-driven shite? Not to mention that (a) ticket and popcorn prices are ridiculous, (b) many urban theatres are filled with yakking low-life apes munching on jalapeno nachos and checking their brightly glaring cell phones, (c) the varied VOD and streaming options are highly competitive and attractive plus cable dramas seem much more satisfying to anyone with a smidgen of taste. Theatrical attendance levels are presumably still dropping. Two years ago Goldman Sachs analysts Drew Borst and Fred Krom concluded that ticket buys were at a 25-year low with under-30 attendance down 40% since 2002. The theatre experience has been declining for a long while, and action movies…I don’t want to talk about it. Megaplex summer is just something to endure, get through, wait out. Life begins with Venice, Telluride, Toronto and New York, and then the season begins. There are many, many good to great films about to unfurl. It’s simply a matter of ignoring the diversions made for the downmarket mob, and of course the mob itself.

On the face of it, a Bluray of a 35 year-old made-for-TV movie doesn’t sound all that essential. But David Greene and C.D.B. Bryan’s Friendly Fire may — I say “may” — be an exception. I know it got to me when I saw it in my fleabag Sullivan Street apartment in the spring of ’79, but you can’t trust an old memory. Based on a series of New Yorker articles and then a book by Bryan, it won four Emmy Awards and was nominated for several other honors. It’s basically about the pain of being lied to about the cause of a loved one’s death. Carol Burnett and Ned Beatty portray Peg and Gene Mullen, an average couple going through hell because the U.S. military won’t explain how their son (Timothy Hutton) happened to be killed by U.S. artillery fire during a Vietnam War battle. Sam Waterston plays Bryan. As many as 8000 U.S. soldiers might have been killed in Vietnam by friendly fire; many thousands more were killed by their own during World War II, World War I and other major conflicts. Friendly Fire aired on ABC on ABC on 4.22.79, attracting an audience of 64 million people. The Kino Lorber Bluray is streeting on 8.26. 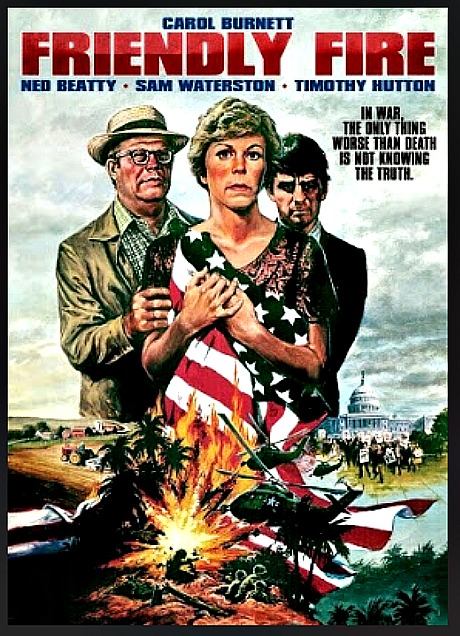 James Garner‘s passing led me to a seven-week-old announcement about Kino Lorber releasing a Bluray of William Wyler‘s The Children’s Hour (’62), in which Garner plays a strong supporting role as Audrey Hepburn‘s fiance. John Michael Hayes adapted Lillian Hellman’s 1934 play; Hellman got screen credit but otherwise had nothing to do with the Wyler film (which is viewable right now on Vudu in HDX). This led to me a YouTube clip of Hellman presenting the Academy Award for Best Documentary Film at a ceremony on 3.28.77. It is very unfortunate that the editor chose to cut out Hellman’s remarks about her blacklisting, which I’ve pasted after the clip:

James Garner, 86, has left the earth, perhaps even the solar system. To many he was Maverick or Jim Rockford, but to me he’ll always be Charlie Madison, the nonchalant dog-robber and “practicing coward” in Paddy Chayefsky and Arthur Hiller‘s The Americanization of Emily (’64), which Garner often said later was his favorite performance. My second favorite Garner guy is Lt. Robert Hendley (a.k.a. “the Scrounger”) in John Sturges‘ The Great Escape (’63). My third favorite is race-car driver Pete Aron in John Frankenheimer‘s Grand Prix (’66). And that was it, really — a four-year streak in which Garner was peaking like a stallion and 100% in synch with America’s idea of success and masculinity — smart, laid-back, smooth, broad-shouldered, good-looking, a little scampy.

All right, if you add his three years with Maverick (’57 to ’60) plus Sayonara (’57), The Children’s Hour (’62) and one or two of his fluffly romcoms with Doris Day I guess Garner had a nine-year streak but ’63 to ’66 was when he really and truly mattered — when he was “the guy.” I know he was primarily at home on the tube for most of his career, but he owned mainstream movie potency for that four-year period.