Support on Patreon Follow @wellshwood
32 Comments
This Is Not Cool

Richard Gere, the silver panther who fucked and finagled in Arbitrage, cut legal corners in Brooklyn’s Finest, romanced Diane Lane in Nights in Rodanthe and merrily fell in love with Jennifer Lopez in Shall We Dance a mere ten years ago…Richard effing Gere is hanging with a bunch of sqinting, doddering elders (Judi Dench, Bill Nighy, Maggie Smith) in The Second Best Exotic Marigold Hotel? I want my Dennis Peck back! The American Gigolo guy does not belong in a fucking retirement village. Somebody hit rewind.

Earlier this afternoon I did a 15-minute interview with The One I Love costars Mark Duplass and Elizabeth Moss. Nice chat, fast and loose, ball in the air, etc. I’d recorded our discussion on two Olympus digi-recorders just to be sure. 20 minutes later I discovered that neither recorder had captured our conversation. I was stunned but I didn’t fold. I collected my myself and spent two hours tapping out memories of our discussion. Riffs, recollections, back-and-forths, snippets. It looked pretty good, in some kind of shape. I was about to hit save…and then some mystifying keystroke from hell killed the post. Erased. I’ve never lost two hours worth of WordPress work in my life (auto-save has always functioned until today), but today was a bingo. I suppose I could re-write the damn thing again tomorrow morning but not today. Way too angry. All I have at this point are shots of Moss and Duplass. That’ll have to do for now. 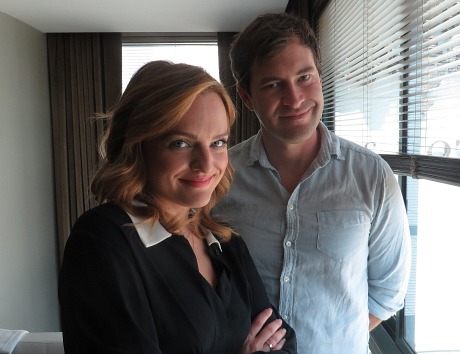 The presumption is that “I Love You All,” a song sung by Michael Fassbender in Frank (Magnolia, 8.15), is meant to be taken ironically, at least when Fassbender performs it with his costars while wearing an “ironic” paper-mache head. I have this vague suspicion that you can’t love or even like anyone while wearing a head mask, but I could be wrong. My understanding is that affection is not a pose or a musical attitude — it’s as sincere as a heart attack, and the act of wearing a dumbfuck mask is testimony to the fact that the wearer is too emotionally chickenshit to feel or offer love.

But maybe that’s just my hostility talking. The song would probably work better if it was called “I Hate You All (But Not So Much As I Hate Myself)”. Fassbender’s character is based upon a real-life comic musician persona, “Frank Sidebottom”, who was inhabited by the late Chris Sievey. (Don’t ask.) Fassbender and his costars performed the song last night on the Colbert Report.

I saw Frank a couple of nights ago. (Well, most of it and then I saw the rest last night through an online link.) I was asked for my opinion the next day, and I tapped out the following: “It’s a movie that’s stuck on itself and its own sense of hip bemusement. It’s very dry, very smart, very well done, sometimes funny and utterly marginal and peripheral.” And yet Devin Faraci, who was sitting two rows in front of me, was laughing out loud from time to time so maybe…you know, I’m just not hip enough for Frank but Devin is. I mean, that’s one possible interpretation.

Two Philip Glass tracks from Akhnaten, his 1983 three-act opera, are heard on the soundtrack on Andrey Zvyagintsev‘s Leviathan. The music, initially heard at the very beginning of the film, tells you right off the bat that Leviathan is not going to deliver mild-mannered escapism. A Sony Classic spokesperson told me that the two tracks are titled “Akhnaten’s Reign — Prelude,” and “The Ruins — Epilogue.” Glass’s publicist told me there are actually three tracks — “The Ruins”, “Epilogue” and “Year 1 of Akhnaten’s Reign.” Now I’m all turned around and don’t know who to believe.

“Back in ye olde summer of 1996, few could have imagined that we would eventually look back fondly on Jan de Bont’s Twister as the kind of movie ‘they’ don’t make like they used to. And yet, a scant two decades later, here comes Into the Storm to prime that nostalgic tear. At its best, Storm is like a really high-tech version of those science-museum wind-tunnel simulators that thrill groups of touring schoolchildren with their roaring blasts of hurricane-force gales. But stretched out to even 90 minutes, such thrills become monotonous, and by the time the film arrives at a climax that finds most of the cast waylaid in a storm drain, the effect is like sitting through all the cycles of some ultra-super-deluxe gas-station car wash. Into the Storm can make it rain like nobody’s business, but when it tries to be smart, it comes out all wet.” — from Scott Foundas‘s 8.7 Variety review.