Support on Patreon Follow @wellshwood
36 Comments
If You Insist

I really hate spitballing this early on potential Oscar nominees but Gold Derby‘s Tom O’Neil insisted. Wait until after Telluride or better yet after Toronto. I have to say again that I feel a teeny bit irked by the default favoritism being shown to Angelina Jolie‘s Unbroken. A movie about a guy who had run-ins with the law, competed in the 1936 Olympics and then survived two horrible ordeals (one at sea, the other in a Japanese P.O.W. camp) and then went on to live a full life is not enough. “He survived!” ain’t my idea of profound. Everybody goes through hard times, some harder than others. Some make it through, some don’t…big deal. It may be there’s a lot more to Unbroken than just that, but I’m telling you right now I don’t like the way all the lemmings are going over the cliff for it already. Boyhood, fine, but not Unbroken. Or at least, not yet. 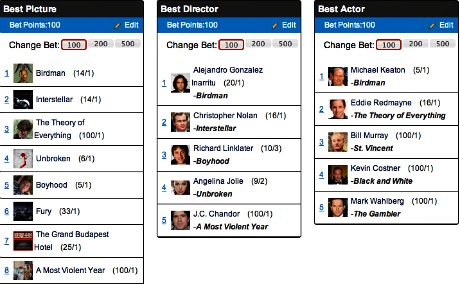 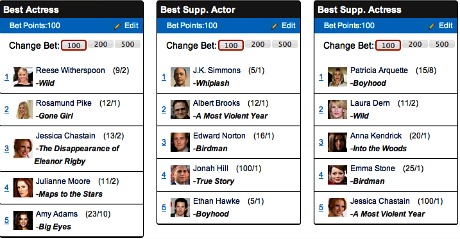 I’m not saying that Karen Leigh Hopkins‘ Miss Meadows is crap but the cutting of the trailer feels off — mistimed, lacking an elegant rhythm. And the darkly comic material feels like something New Line Cinema might have exploited in the mid ’80s. So it may just be a cruddy trailer but if the movie sucks (as the Hollywood Reporter believed in a Tribeca Film festival review), why did Holmes agree to star in it? Reason #1 is that she’s probably not getting first picks at the choice stuff. Reason #2 is that she feels that playing a character with a dark edge might enhance her profile, and that playing a small town version of Charles Bronson in Death Wish or Zoe Tamerlis in Ms. 45….maybe. If I were Holmes I would do New York plays or make a classy film in Europe or something. She’s 35 and loaded. She can afford to be picky. And she’ll be attractive well into middle age. In eight or ten years she can play cougars. Miss Meadows opens sometime in November via Entertainment One.

No Comments
Not So Fast

Two days ago I wrote about having “ignored the math” when I tapped out an 8.14 riff about the BFI London Film Festival showing of David Ayer‘s Fury (Sony, 10.17). The BFI calling the 10.19 LFF showing a “European premiere” means “that some U.S.-based festival will be also be showing the Brad Pitt-starring WWII combat film before it opens on 10.17,” I wrote. (L.A. Times columnist Steven Zeitchick came to the same conclusion on 8.14.)

Yesterday morning Variety critic Scott Foundas shared a little skepticism: “I wouldn’t get too hung up on that ‘European Premiere’ language,” he began. “Last year the London Film Festival kept calling Saving Mr. Banks a ‘European Premiere’ too, leading all of us at Variety to panic and think that surely it was going to have an official ‘world’ premiere somewhere else before, but in the end it didn’t. I was later told by someone at Disney that [the ‘European premiere’ stipulation] was done out of deference to the AFI Fest, which was then hosting the North American Premiere, so as to not make it seem like London was one-upping them too badly.

Tomorrow night I’m catching the updated, remastered, 16 x 9 version of Thom Andersen‘s Los Angeles Plays Itself at Cinefamily, where it will also screen on Saturday, Sunday and next Wednesday. Finally! 11 years after catching the first version at the Toronto Film Festival and almost a year after reading about the new version in a 9.20.13 article by Robert Koehler. It was announced last month that Cinema Guild will distribute.

I couldn’t find an embed code for Sarah Palin’s rave review of Phillip Noyce‘s The Giver, but at least I watched and recorded it — here’s the mp3. Will all the right-wing pundit love for The Giver (“A Glimpse of Progressivism Gone Wrong”) deliver a box-office boost? So far it’s at $16 million and change, but it’ll face stiff competition for the Christian dollar this weekend from When The Game Stands Tall, a Christian football movie from Sony Affirm. Boxoffice.com‘s Phil Contrino doesn’t see much happening. “The Giver didn’t come out of the gate strongly so there’s not a lot of momentum,” he says. “It might get a tiny bump from Palin and the others but When The Game Stands Tall has the edge right now.” On top of which, he claims, “There’s a YA dystopian fatigue factor out there.” 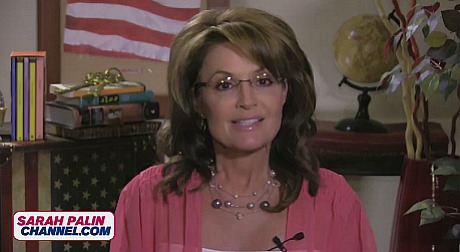 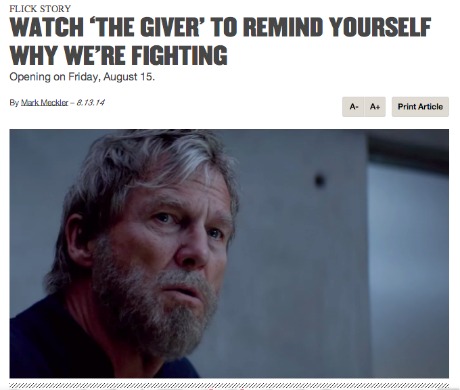 Still, The Giver is at least the recipient of some fresh rightwing oxygen, and this might at least translate into added coin from the home video, VOD and Bluray realm…no? I wonder how the ardently liberal Noyce and Harvey Weinstein feel about this? They may not relate to rightwing theology but at least the conservative wackos are true believers and they’re really pushing their flock to see it. Check out these rightwing praise pieces — article #1, article #2, article #3 and article #4.

6 Comments
Not As Storybook As It Seems

I’ve been wondering if James Marsh‘s The Theory of Everything (Focus, 11.7) intends to sugar-coat the actual story of the relationship between theoretical physicist and cosmologist Stephen Hawking (Eddie Redmayne) and former wife Jane (Felicity Jones), in the same way that A Beautiful Mind overlooked some of the less appealing aspects of John Nash‘s life? Perhaps not. Jane, bless her, stuck by Hawking and got him through his trials with ALS and depression, but in 1977 she met “organist Jonathan Hellyer Jones when singing in a church choir…and by the mid-1980s, he and Jane had developed romantic feelings for each other,” acccording to Hawking’s Wiki bio. “According to Jane, her husband was accepting of the situation, stating ‘he would not object so long as I continued to love him.'” Precisely how the film will deal with this chapter is yet to be known but I know the IMDB lists Jones as a character and that he’s played by Charlie Cox. 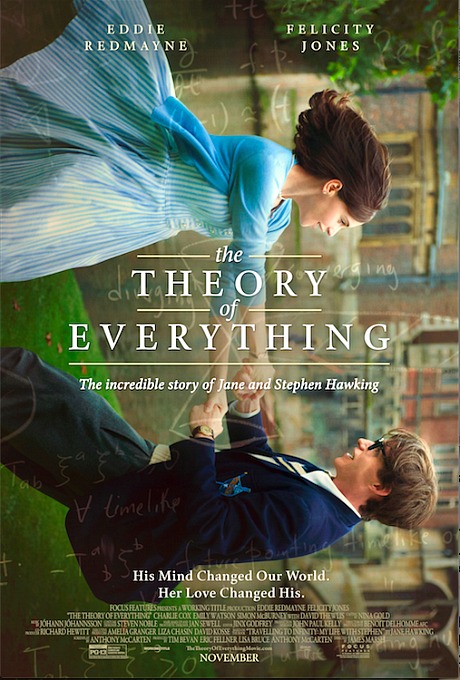 The anti-police rhetoric and street fervor in Ferguson has reached such a pitch over the last several days (and not without dozens of belligerent provocations from the authorities) that it doesn’t seem possible that the “Michael Brown got shot by a racist cop because he was black” crowd can ever consider much less accept a different scenario. But recent reports from St. Louis Post Dispatch crime reporter Christine Byers and Foxnews.com’s Hollie McKay seem to be puncturing the anti-cop, Brown-basically-died-from-brutal-attitudes narrative. I’ve assumed all along that Darren Wilson, the Ferguson beat cop with a reportedly blemish-free record who shot Brown six times and wasted him with a shot to the head, almost certainly fired in a state of fear and possibly panic. Does it make any sense at all that he’d fire six times while Brown passively stood or kneeled with his hands up?

No one is a bigger fan of Charlie McDowell‘s The One I Love (TWC/Radius, 8.22), the Twilight Zone-y relationship film with Mark Duplass and Elizabeth Moss, than myself. And the swelling in my right hand is completely healed after that 8.7 refrigerator-punching. But Duplass and Ted Danson as a gay couple? Nope. I’ll accept a 10 or 15-year relationship age gap, maybe 20 in a pinch. But not 29.

Ira Sachs‘ Love Is Strange (Sony Classics, 8.22) is a bittersweet, sluggish, mild-mannered tale about an older gay couple, Ben (John Lithgow) and George (Alfred Molina), facing financial hardship and having to give up their condo and temporarily move in with friends. It’s all because they’ve recently married and George, a Catholic school music teacher, has been canned by the Archdiocese for the usual homophobic reasons. Right away I asked myself, “They didn’t see this coming? They didn’t even suspect that the Catholic elders might react this way?” Not very bright if you ask me. It’s great to get openly married and wave your flag but what idiot would do this knowing that it might lead to getting whacked? My second thought was, “They can’t they fight this in court? Doesn’t George have an extremely strong discrimination case against the Archdiocese? What are they gonna do, take this lying down?”

They take it lying down, all right. Sachs doesn’t want any blame-gaming or court battles. His film is mostly about coping and weary resignation. Sachs is interested in the humiliating process of leaning on friends and family and having to make do with less, and in basically going down the drain with dignity. The film’s slogan, if you want to give it one, is “life sure gets hard when you lose your home but at least we love each other and our extended families are helping but whoa, what a way to wrap things up.” Love Is Strange is nothing if not kindly, perceptive and compassionate, and there’s no faulting Lithgow and Molina’s performances. They know exactly what they’re doing and how to make many (okay, more than a few) of their scenes turn the key and flip the lock. But let no one doubt that Sachs has made a very low-key, occasionally quite trying film. I didn’t hate it but I checked my watch at least six or seven times.