In an 8.22 Grantland piece about the late Michael O’Donoghue, Tom Carson briefly mentions Mr. Mike’s Mondo Video. This reminded me of an article about this vaguely funny anthology film that was included in the debut issue of the Thousand Eyes Cinema Guide, a Sid Geffen publication that I was the managing editor of in late ’79 or ’80. (I need to find some back issues.) The piece was basically about attempts to get it theatrically distributed, however marginally, and how the original 75-minute assembly was padded with extras (including a Mr. Bill sequence) to push the running time up to 90 minutes. Carson’s article also reminded me of O’Donoghue’s cat-swimming school sequence, which, when you get down to it, is pretty much the only thing I remember about Mr. Mikes’s Mondo Video. Here’s the whole thing. Oddly, it only runs 71 minutes and change, or a little less than four minutes shorter than the original version.

The well-liked, much-respected British actor-director Richard Attenborough has passed at the age of 90. Condolences to fans, family and friends but…well, it’s not like a tree fell on him at age 37. Attenborough lived on a long, industrious and apparently happy life. Accomplished, celebrated. We should all be so fortunate. I did a phoner with Attenborough in the ’90s, and he was almost all mirth, giggles and enthusiasm. Quite impossible to dislike, an excellent politician, almost joyful to a fault.

But I have to say (yes, here we go) that while he was obviously a talented actor who hit his marks and did the job every time, some of his performances drove me nuts. I know Attenborough’s “Big X” in The Great Escape was supposed to be the stalwart leader, but I found him a pill. (This may sound a bit harsh but there was a part of me that didn’t entirely mind when he got shot to death at the end.) I thought he was too emotionally pained and on-the-nose as “Frenchy” in The Sand Pebbles. And I’m sorry but I despised him in Jurassic Park…that glowing pink face and white beard, that look of ecstasy when discussing his dinosaurs, every emotion telegraphed, etc.

I hated the idea of Breaking Bad from the get-go. I didn’t want to know from the scurviness of it. Meth labs, low-life dealers, cancer-stricken protagonist, etc. Plus I’ve had this odd animal dislike for Aaron Paul all along. Have I finally watched all five seasons? No. Have I watched a couple of dozen episodes? No. But I did drop into most of the final season on Vudu. I respect Vince Gilligan‘s ablity to “sell” this repellent but absorbing world, if that makes any sense. This last portion of the final episode [below] is pretty damned effective. But I’m not going to live in realms that I don’t want to live in, and that’s my right as a free individual. I will not invest in characters who have to nowhere to go but down. I can invest in characters who aren’t going anywhere in particular (i.e., existential floaters) or who are determined to be the rebel or the asshole or the sociopath or the latest Tony Montana, but I can’t ride along with guys who are guaranteed to lose.

Sin City: A Dame To Kill For performed so poorly this weekend, landing in eighth place with a pathetic $6,477,000, that you have to wonder why. I was bored by it after five minutes but I figured, well, that’s me. I figured the public might give it a whirl but no. And it cost $60 to $70 million. The lesson, I suppose, is that if you’re going to crank out a sequel, do it within two or three years. Don’t wait fucking nine years, which is how long it’s been since the original, successful Sin City opened in ’05. I’d also like to think that audiences took a whiff of the trailer to the sequel and went, “Oh, God…this again? More of Miller’s misogynist old-dog sexual fantasies, which are rooted in noir cliches of the ’40s and ’50s?” My preferred fantasy is that Miller’s conservative-asshole karma, which reached its zenith when he posted that rat-ugly hate piece about the Occupy movement on his website, came back to bite him. 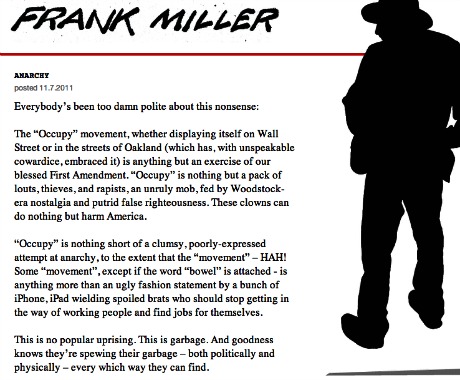 Either way Miller is done. For now, I mean. He doesn’t speak for the zeitgeist and the zeitgeist wants nothing to do with him. I just re-read a two-day-old Grantland profile of Miller by Alex Pappademas — it almost reads like an obit now. Nobody loves you when your movie’s a flop. Nobody makes eye contact, people stop calling, your assistant gives you neck rubs, etc. Awful. The best thing to do is to drive out to the desert and sulk.

Have I re-watched David Fincher‘s The Girl With Dragon Tattoo since watching it twice in late 2011? Due respect but no. I’ve watched The Social Network six or seven times; ditto Se7en and the Zodiac director’s cut Bluray. But I can let Tattoo go. And yet loved the opening credits, which came out of a collaboration between Fincher, Blur Studio’s Tim Miller and Kellerhouse, Inc.’s Neil Kellerhouse. (I’m presuming, by the way, that the opening credits for Fincher’s Gone Girl are going to be phenomenal.) I’m not saying that Tattoo is unfulfilling or unsuccessful — it’s somewhere between an entirely decent and very good paycheck thriller — but the titles exist on a higher aesthetic plane, largely because this sequence is the only completely original aspect.

Why am I mentioning this? To revive an old-saw topic, i.e., films that try but can’t compete with their opening-credit sequences.

The Saul Bass title sequence for the old Ocean’s Eleven (’60) is much, much better than the film; ditto the ending sequence with the downhearted Rat Pack strolling along the Strip to Sammy Davis, Jr. singing a slow, downbeat version of “Eeyo Elven”. No one’s ever cared that much for Clive Donner‘s inane, anarchic and not particularly funny What’s New, Pussycat? (’65) but the animated main-title sequence, designed by Richard Williams, is wonderfully silly and raucous and…what, champagne fizzy? In its own dopey way it gives you a faint idea of what it was like to repeatedly get lucky and have great sex, over and over and over, in ’65. (A Bluray version streets on Tuesday.)