Support on Patreon Follow @wellshwood
6 Comments
All She Wrote

Wow…I’ve never posted just one article in the course of a day but it had to happen sooner or later. My LAX to Toronto flight (Air Canada) taxi-ing as we speak. Arriving 11-ish. I like setting up early.

Yesterday Deadline’s Pete Hammond praised Ramin Bahrani’s 99 Homes, a moral-outrage drama about a couple of guys (Andrew Garfield, Michael Shannon) making good but smelly money by evicting working-class Floridians from their homes roughly two years after the 2008 meltdown. Dog eat dog, survival of the fittest, no room for compassion, etc. Pete is usually a shrewd assessor of award-season contenders but this time he’s way off. I saw 99 Homes in Telluride a couple of days ago and it was all I could do to keep from groaning aloud. Just because a film is portraying real- life realities and has its heart in the right place doesn’t mean it’s good, much less an awards hottie. 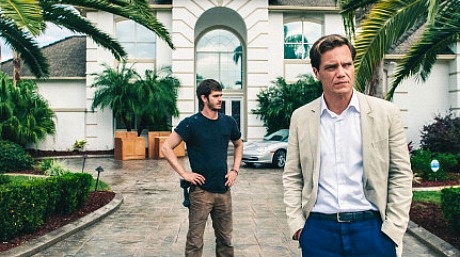 99 Homes is a close-up portrait of the real-estate trauma that’s been happening in middle-class communities all over the country for the last five or six years, and is about the willingness of a regular guy to whack regular folks -— to serve as a kind of foreclosure hit man — in order to save his own neck.

Then again the evictees aren’t blameless. They aren’t exactly “deadbeats” but they are out of work and behind on their mortgage payments, and are probably over-extended in terms of income vs. debt. I was saying to myself, “Too bad, chubby…but did you ever imagine this might happen when you signed that bank loan?” A lot of out-of-work people have had their homes seized by bankstas over the last three or four years. And guys like Shannon’s Rick Carver are paid to be their muscle on the street.

Carver is technically a realtor but is really the Tony Montana of foreclosures and evictions. It’s the return of The Ice Man in suburban Florida and dressed in nicer duds. But at least he’s giving Garfield’s Dennis Nash, a single construction-worker dad whom Carver evicts from his modest Orlando-area home (along with his son and mom) as the film begins, a chance to stay afloat. Garfield has moved his brood to a motel and is panicking over his inability to cover expenses, and so he naturally says “damn right” when Shannon offers work.