Earlier today Screen Daily‘s Ian Sandwell reported about a deal signed by the London-based Arrow Films to distribute David O. Russell‘s never-finished, long-shelved Nailed under a new title — Politics of Love — sometime next year. The dark Washington D.C.-based dramedy, which stars Jessica Biel, Jake Gyllenhaal, Tracy Morgan, Catherine Keener, Paul Reubens, Josh Brolin, Kirstie Alley and James Marsden, is about a waitress (Biel) who gets accidentally shot in the head with a nail, which leads to unbridled sexual behavior and a weird relationship with a Congressman (Gyllenhaal). Pic will pop in England sometime next spring or summer or whenever. Which means, of course, that sooner or later it’ll stream in the States. Russell is probably pissed about this but I can’t say I’m not curious. I realize it probably doesn’t work but it can’t be a total wipe-out. Russell is too sharp, too exacting. Last May I reported that producer Kia Jam, the guy who sold British rights to Arrow, had recently screened the film in Manhattan for U.S. distributors. 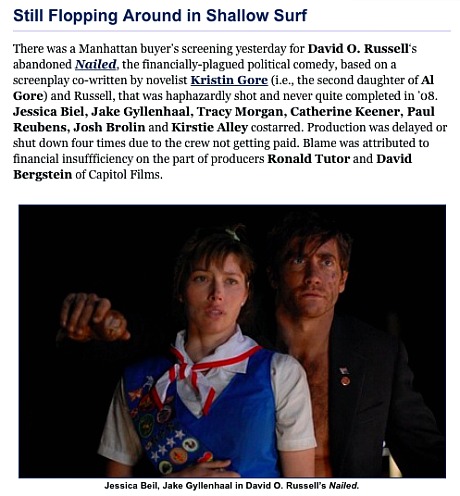 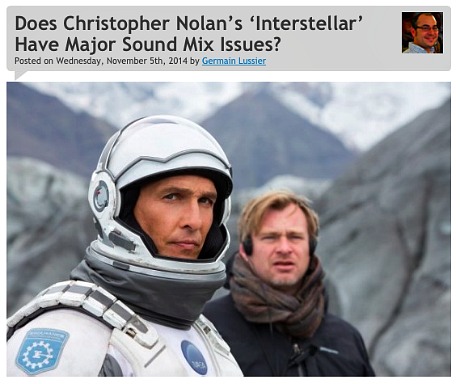 Rupert Wyatt, William Monahan and Mark Wahlberg‘s The Gambler will have its big debut next Monday, 11.10 at the Dolby theatre at 7 pm. The idea is to nudge Wahlberg into Best Actor contention (who’s vulerable among the so-called locked-in gang of four?) and maybe John Goodman also in the Best Supporting Actor race….hey, why not? J.K. Simmons and Edward Norton could use the competition. And what about Jessica Lange (who obviously nails her role as Wahlberg’s mom) elbowing her way into the Best Supporting Actress arena? If Wahlberg really scores it would be him, Birdman‘s Michael Keaton, Foxcatcher‘s Steve Carell, The Imitation Game‘s Benedict Cumberbatch and Eddie Redmayne in The Theory of Everything. Except I believe in Tom Hardy (Locke, The Drop) more than Carell.

12 Comments
No Way In Hell

The following passage from John DeFore‘s Hollywood Reporter review of Angus McLachlan‘s Goodbye To All That (dated 4.18.14) has convinced me to avoid it like the plague: “Otto’s ex (Melanie Lynskey) behaves with such cold self-absorption, kicking him out of his home and then expecting him to make everything easy for her, that we can’t help but long for a showdown in which Otto (Paul Schneider) makes her see how awful she’s being. [And yet] the film pointedly denies us this gratification, and eventually suggests we were wrong to want it — that although we never witnessed his failures in the relationship, they were real, and his job now is to grow instead of vent his anger.” Yeah, sure, we all have to grow but what?

Two and a half years ago I posted a sincere piece called “Solve Almost Everything.” It basically said that if you cut loose the hinterland crazies many of the nation’s problems would vanish in one fell swoop. And now** comes a book by a right-wing guy, Douglas Mackinnon, called “The Secessionist States of America: The Blueprint for Creating a Traditional Values Country…Now,” and it more or less says the same thing. Secede from the multicultural U.S. of A., form a “traditional values” nation called Reagan (screw minorities, gays, women…hooray for the Ozzie and Harriet ’50s) and yaddah yaddah. If someone like me can agree with a guy like Mackinnon, there’s hope for this country yet. 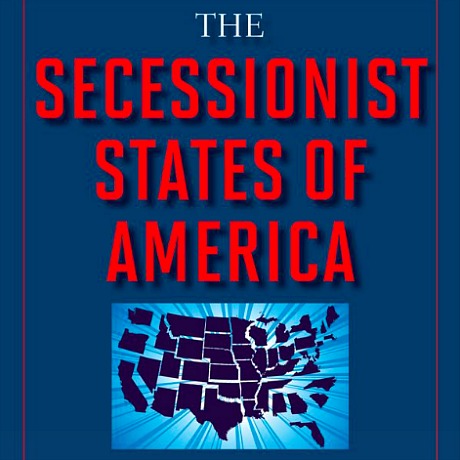 44 Comments
Ride It Out, Keep Your Head Down

The GOP’s Tea Party wave will last exactly two years. In the 2016 election Republicans will be defending 26 seats while Democrats will face re-election in just 10 races. The only thing that scares me is that as the 2016 election approaches voters might start thinking “how does continuing the Clinton dynasty help my situation exactly? Why can’t some 21st Century person run for President? Someone who was born in the ’60s or ’70s who really gets it?” In short, Rand Paul. It would be a whole different story if Elizabeth Warren were to run (please!), but I accept that Clinton will probably be nominated and most likely win and in so doing will probably bring in a lot of Democrats on her coattails, so it’s just a matter now of huddling down and toughing it out and waiting for this awful two-year period to be up.

“Gentlemen of the court, there are times when I’m ashamed to be a member of the human race and this is one such occasion.” — Kirk Douglas‘s Colonel Dax character in Stanley Kubrick‘s Paths of Glory.

Yesterday older, mostly white middle-class voters, understandably enraged about the generally healthy economy, the lowest unemployment rate in many years, a successful implementation of Obamacare, no terrorist attacks over the last six years and the fact that two people with the Ebola virus flew into this country and infected three health-care workers, installed a Republican majority in the Senate and a big Republican majority in the House. And today a major, must-see Chris Nolan film about the ruination and abandonment of our planet is opening nationwide. It seems to me that there’s a certain ironic linkage in that, and most likely a general disconnect among the natives.

Tens of thousands of Americans will be seeing Interstellar today and over the next five days and beyond, including those who voted for all of those highly principled Republicans who’ll be sworn in next January. The rural, mostly-white yokels who voted against President Barack Obama‘s Stalinist health-care system, his African heritage and his utter failure to stop the scourge of Ebola may be touched by Nolan’s film, and they may nod in recognition as they consider a possible future in which earth has become all but uninhabitable. But it’s probably a safe bet that very few of them will say as they walk out of the theatre in Bumblefuck, Kansas or wherever the fuck they live, “Yeah, the earth is partly destroyed now and our grandchildren and great-grandchilden will be really screwed if we don’t do something…hey, who did we just vote for?”