If Anthony Hopkins is starring in a film, it has to be at least half-interesting. That’s my basic thinking about Kidnapping Freddy Heineken, a forthcoming European-made film about the kidnapping of Dutch businessman Alfred “Freddy” Heineken, the grandson of the founder of the Heineken brewery. His abductors were paid a mind-blowing ransom equivalent to $50 million U.S. dollars. William Brookfield‘s screenplay is based on a book about the kdnapping by Peter R. de Vries. Pic costars Sam Worthington, Jim Sturgess and True Blood‘s Ryan Kwanten. Pic will open in Europe on 3.12.15, so is it playing now at the AFM?

It’s not exactly radical to suggest that some directors tend to express stuff about their natures by focusing on certain themes and scenarios in film after film. That just-posted Vulture video made light of the fact that Interstellar director Chris Nolan has something about dead wives, whatever that means in terms of his psychology. It’s obvious that the Wachowski brothers, particularly the former Larry (now Lana) Wachowski, were expressing an interest in hot lesbians when they made Bound (’96) and again when they included a brief glimpse of some girl-on-girl action in V for Vendetta (’06). (It’s not my business but the general understanding is that Lana likes women.) And as long as we’re discussing (or will soon discuss) getting badly beaten up, it’s obvious that characters played by Marlon Brando, who had a lot of clout in the ’50s and early ’60s, were frequently beaten bloody, whipped, shot full of holes, burned to death, etc. Some have deduced that Brando was expressing some kind of guilt and a need to be punished. 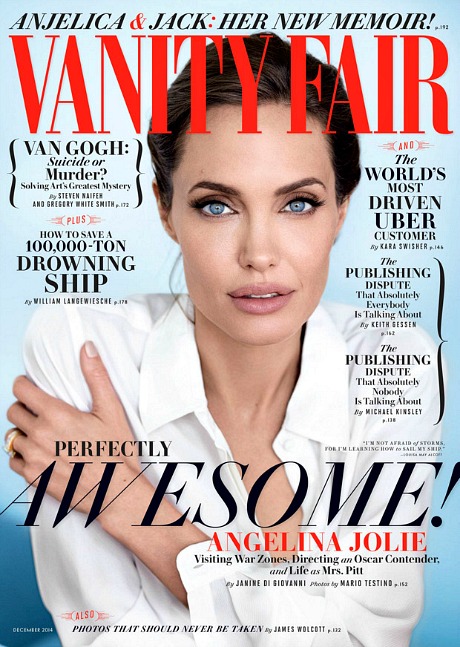 James Marsh‘s The Theory Of Everything (Focus Features, 11.7) is currently at 82% on Rotten Tomatoes and 68% on Metacritic. The 68% rating could be seen as troubling but the 82% ups the curve. The Academy likes veddy British movies about distinguished or intriguing people with British accents standing up to challenges and overcoming tragedies. Theory and The Imitation Game obviously fit into this slot. The slightly mixed Theory reviews may indicate that Imitation, its closest competitor, will do better in the long run but there’s no telling with these things. The Theory of Everything is all about the last 20 or so minutes. Without them it would be just a pretty good, reasonably effective biopic. But it saves itself at the last minute with the dropped pen/pencil and the time-reverse sequence, and that’s the bottom line.

I should have included Wes Anderson‘s The Grand Budapest Hotel in the initial Stu Van Airsdale-inspired HE Oscar Balloon chart (posted on 10.26) by virtue of having included Anderson in the initial Best Director chart (posted on 10.28), but it took a while to get around to it. Birdman still leads, Boyhood is still nipping at its heels and The Imitation Game and The Theory of Everything are still holding third and fourth place. Gone Girl demands inclusion because it’s David Fincher exercising his peak powers and making fierce art out of a murderous marital potboiler. Whiplash has surged ahead of the obviously damaged Interstellar and the still-unseen Unbroken. Foxcatcher…fine. And there’s no choice but to position two other keenly anticipated films, A Most Violent Year and American Sniper, at the bottom of the list. I didn’t even include The Gambler because the room is crowded and it mostly seems like a Mark Wahlberg Best Actor opportunity. For now. It screens at AFI Fest next Monday. 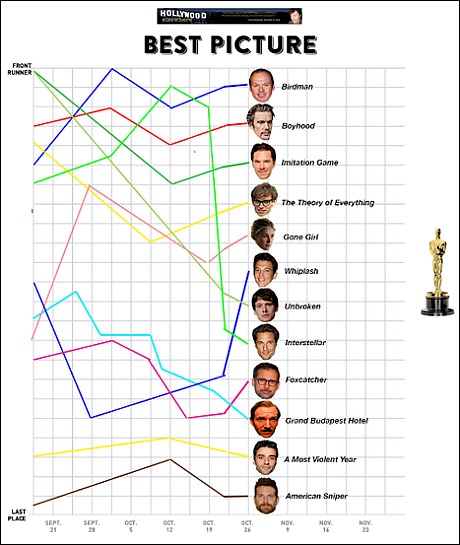 Two weeks ago I riffed on a featurette for Rob Marshall‘s Into The Woods (12.25) that used a little sliver of Stephen Sondheim‘s score. It was part of a step-by-step process in which Disney marketers have been revealing that the film is a musical. Last July’s trailer contained no singing at all. Now, today, the cat is totally out of the bag.

In the realm of Star Wars mythology as well as the cosmic flow-stream that Siddhartha, Arjuna, Alan Watts and Howard Beale spoke about with such feeling, “the force” is nothing if not eternal. In the words of Captain Ahab, the force “twas rehearsed by thee and me a billion years before this ocean rolled.” It therefore cannot awaken or get a good night’s sleep or trend or be dormant or take an afternoon snooze. The newly-announced title of J.J. Abrams‘ Stars Wars, Episode VII is therefore, no offense, a bit of a head-scratcher. It also suggests that on some level the force was slumbering or dormant or not up to full strength during the first six episodes. I’m not sure that Yoda, Anakin Skywalker, Emperor Palatine, Luke Skywalker and Obi-wan Kenobi would agree. The force is not a religion or a downloadable song or YouTube video. Only a select few have midi-chlorians in their blood so how the fuck can the force “awaken”? Unless, I suppose, a person with force-level midi-chlorians has been in a coma or something. Or has been under the weather with a really bad, months-long flu.

Between this satirical Vulture video, Phil Plait‘s mostly science-oriented Slate takedown and yesterday’s Michael Cieply N.Y. Times story about Jessica Chastain‘s Interstellar contract forbidding her from promoting A Most Violent Year, a kind of Interstellar pile-on is starting to happen. Or is it? Any reactions from HE regulars who caught Interstellar yesterday, leaving aside (if you can) the sound issues?