Let’s imagine that Disney and Working Title execs get together soon and decide they need to erase Jack Black‘s “Cosby sweater” line in High Fidelity as far as all future DVDs, Blurays and digital downloads are concerned. To remove the taint. Which means they’d have to hire Black to re-dub the line. But with what? How can Black describe the sweater humorously without alluding to the un-person? Strictly hypothetical. A stupid idea, of course, but you know how corporations get when icky stuff surfaces and “threatens the brand.”

I’m sorry I missed Liv Ullmann‘s Miss Julie at the Toronto Film Festival, but I’m even more sorry that I can’t watch the trailers for this mixed-response film without wondering what’s up with poor Samantha Morton. She’s only 37, and over the last four or five years her head, neck and body have seriously ballooned. An unkind remark, you may say, but do you think Average Joe audiences are going to ignore this fact? Her appearance has significantly changed. Certainly since she was in Anton Corbijn‘s Control. Colin Farrell plays Jean, the fiance of Morton’s Christine, in this adaption of August Strindberg’s 1888 play. You look at Morton and then Jessica Chastain, and you can’t help but partially sympathize. Miss Julie may (I say “may”) open in the U.S. sometime in December.

444 Comments
Another Cosby Victim Comes Out 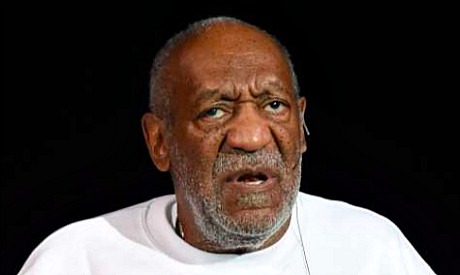 Two days ago I riffed about the relative lack of calming shade and big towering trees in the Los Angeles area. Another thing we’re short of is rain, of course, and particularly torrential downpours, which I love standing in the middle of as long as I’m under an umbrella or shelter of some kind. I experienced an awesome cloudburst last year at this time (on 11.19.13) in Vietnam, in a forested area outside of Hue. The sound alone was fantastic. How many of these have I sampled since moving to Los Angeles in ’83? Damn few. I remember another really good one in Paris about 11 years ago. Rivers were raging in the gutters of narrow cobblestoned streets.

Last night I finally watched Marshall Curry‘s Point and Shoot, which won the Best Documentary prize at last April’s Tribeca Film Festival. It’s a handsomely captured, smoothly edited doc about the Middle-Eastern adventures of Matthew VanDyke, an enterprising, financially fortified, highly educated guy who went on a manly motorcycle journey of self-discovery throughout Northern Africa and the Middle East between 2007 and 2009. His most significant stopover during that trip was in Libya, where he made friends and discovered special feelings of kinship for that country’s culture. VanDyke went back to the States but returned to Libya in 2011 to join the fight against Muammar Gaddafi.

I’m a big fan of the word “finality,” which I never seem to hear in everyday conversation. I’m an even bigger fan of movies that use it. I’m thinking of exactly two that have. In Peter Ustinov‘s Billy Budd (’62), able seaman Melvyn Douglas is asked by a naval officer why he’s using the past tense in referring to Claggart (Robert Ryan), the ship’s master-at-arms, and the grim-faced Douglas says, “I look around and sense finality here.” In Don Siegel‘s Charley Varrick (’73), Joe Don Baker chuckles after Sheree North hands him Walter Matthau‘s business card. “Charley Varrick, Last of the Independents,” he reads. “I like that. Has a ring of finality.”

Cruddy reviews (27% Rotten Tomatoes, 35% Metacritic) and infantile, submental, nose-picking humor (which of course is precisely the point) is no impediment to box-office success these days. The Farrelly Brothers’ Dumb and Dumber To, or the reuniting of Jim Carrey‘s Lloyd and Jeff Daniels‘ Harry, will end up with roughly $38 million for the weekend.

I was planning to attend the all-media but the AFI Fest interfered, so perhaps those who’ve seen it will answer a question. Did Carrey and Daniels being a bit older get in the way of the humor to any degree? In a 9.25.13 piece called “Long of Tooth,” I noted that “dumbasses in their 30s vs. dumbasses in their 50s are different equations…you can fall into dumb-shit situations when you’re youngish but guys with creases on their faces are supposed to be craftier and less susceptible.”