Support on Patreon Follow @wellshwood
13 Comments
Another Civil-Rights Story of the South, Set In Mid ’60s

It was complete bullshit from an historical perspective (FBI guys saved the day, local blacks sang hymns in churches) but this Alan Parker film, released just shy of 26 years ago, is absolute aces from a purely stylistic or compositional perspective (excellent photography, exquisite cutting, rumbling score, affecting sense of underlying menace, tasty production design, etc.). And Gene Hackman‘s performance as a good-ole-boy FBI agent is one of his very best. And don’t forget Frances McDormand‘s as a long-suffering wife of an abusive lawman-and-secret-Klansman (Brad Dourif). “Ahh think this is all just some publicity stunt cooked up by that Martin Luther King fella…”

The reader response to last Sunday’s positive review of Jennifer Aniston‘s restrained, on-the-money performance in Cake was basically (a) “Being good in a so-so movie isn’t enough for an Oscar nom” and (b) “Have you taken leave of your senses, praising a performance by a former romcom star, a current costar of poorly reviewed comedies and a supermarket tabloid queen?” But I’m telling you Aniston gets her pain-besieged character. She delivers each line and moment with just the right emphasis, not going too heavy or too light. Dismiss her campaign if you want but I’m telling you. Really.

Two days ago Meet The Press moderator Chuck Todd led a discussion of the Bill Cosby scandal. Before he asked for opinions he ticked off the numerous breaks that drove the story along, including my 11.16 posting of Joan Tarshis‘s account. It’s not likely that HE will merit a mention on Meet The Press again so I thought I’d quickly acknowledge. No biggie but not a shrugger.

I actually received 11 screeners today. Jon Favreau‘s Chef also came from Open Road but I couldn’t fit it into the photo in a balanced symmetrical way. Plus it was the second Chef screener I’ve received. The first (received several weeks ago) was actually the first of the season. 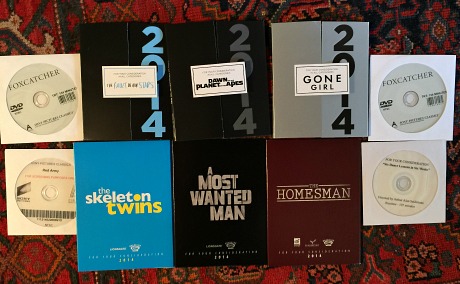 Joe Wright, make no mistake, is a first-rate, major-league visionary director. I was totally on-board with his Anna Karenina, which I regard as a near-masterpiece. I’m therefore a bit sorry that he’s jumped into the Peter Pan legend, which we can all probably do without. Particularly an origin story. I think that Steven Spielberg‘s Hook killed the Pan mystique for anyone who was over the age of five when it came out. That said, Wright’s Pan (Warner Bros., 7.17.05) is obviously nicely designed and handsomely produced. Certainly interesting from a compositional perspective. And we all love the flying sailing ship. Hugh Jackman as Blackbeard, Garrett Hedlund as James Hook (I’m presuming his hand will be bitten off by a crocodile in Act Three), Levi Miller as the orphan who became Peter Pan, Rooney Mara as Tiger Lily, Amanda Seyfried as Mary, etc.

Richard Curtis‘s Love Actually opened roughly 11 years ago. I recall sitting through it like it was yesterday. I despised its grotesquely sentimental tone. It connected in my head to Robert Stigwood‘s Sgt. Pepper’s Lonely Hearts Club Band, which I saw at a New York all-media screening in July 1978. I remember a guy sitting in the front yelling “yecch! agghh!” when costar Peter Frampton sang “The Long and Winding Road.” That was my response to Love Actually. I almost went into convulsions. I was spitting, sputtering.

“I believe that Richard Curtis has done more to sugarcoat and suffocate the romantic comedy genre than any other director-writer I can think of,” I wrote about 14 months ago. “If there’s someone else who has injected his films and scripts with more mirth, fluttery-ness and forced euphoria, I’d like to know who that is. Curtis has no discernible interest in ground-level reality. When writing romantic material he seems interested only in those levitational moments when an attractive man and a simple-but-dishy woman can finally let their true feelings out and look into each other’s eyes and…aaahhh!

HE Suggestions/Predictions For Spirit Wins:

“Leaving aside the present ugliness, no one should misunderstand a simple fact about cops, which is that they deal with the worst aspects of human nature 24/7 and that the only way to deal with them when they’re angry and barking some kind of order is to chill and obey. Don’t run or argue or flip the bird. Just give in and mildly submit and that’ll be the end of it. The key is to make them feel placated so they’ll move on. You will always make it worse if you give them any kind of shit. You can’t improve the situation by going ‘why don’t you leave me the fuck alone?’ Some people can’t seem to understand this.” — from an 8.14.14 post called “Is Ferguson (a) Cairo or (b) 1968 Chicago?”