Deadline‘s Michael Fleming has posted a chat with George Clooney about the North Korean Sony hack debacle. Clooney says he “just talked to [Sony chief] Amy Pascal an hour ago. She wants to put [The Interview] out. ‘What do I do?’ My partner Grant Heslov and I had the conversation with her this morning. Bryan Lourd and I had the conversation with her last night. Stick it online. Do whatever you can to get this movie out. Not because everybody has to see the movie, but because I’m not going to be told we can’t see the movie. That’s the most important part. We cannot be told we can’t see something by Kim Jong Un, of all fucking people.”

So Pascal “wants” to put The Interview out and is more or less in Clooney’s corner or something like that, and yet Sony announces the movie’s not going out at all, not on VOD or online or anything. No offense but something in the equation is missing.

“If you see only one film about 17th century French landscape gardening [next] year, it probably ought to be A Little Chaos, a heaving bouquet of a picture. Kate Winslet stars as a fictional character in 1682 called Sabine de Barra, who is hired by the landscape architect André le Nôtre (Matthias Schoenaerts) to gaze, longingly, at his perfect stubble and mane of lustrous hair. It’s an indulgently actorly piece, but in a thoroughly pleasant way. Director Alan Rickman costars as a very droll Louis XIV, who likes to take a turn through the palace grounds and throw off his wig after a long morning’s kinging. The film is powdered up to the nines, with a wig count in Madness of King George vicinity and a lot of sporting cleavage. ” — from Tim Robey‘s Daily Telegraph review, filed on 9.11.14 from Toronto.

The image below is the cover of a Christmas card from a couple I know. Two things hit me yesterday when I opened the envelope. One, this is pretty good face-pasting, at least by greeting-card standards. And two, I’ve never wanted to see Billy Wilder‘s The Seven Year Itch (’55), and I’ll probably steer clear for the rest of my life. Reason #1: I don’t want to hang with Tom Ewell, who never did it for me. Reason #2: I hate movies about paunchy, schlubby guys getting tempted and teased all through the story but never quite getting there. I just don’t like that. There must be hundreds if not thousands of films that people have heard of and been told are respectable or very good or even pantheon-level, but they’ve never seen them and probably never will, and all for reasons that make as much sense as mine. 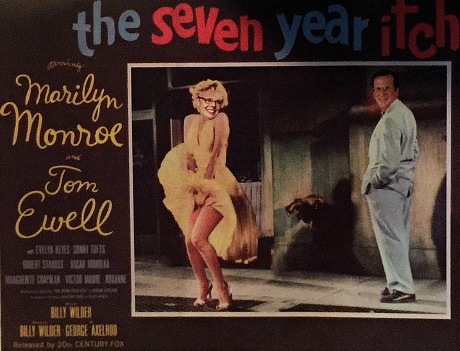 Irish Heartbeat might be my favorite Van Morrison album, but Moondance ranks a close second. It’s not on my iPhone so yesterday I decided I’d buy it…what the hell. Then I happened to watch about half of Howard Hawks‘ To Have and Have Not last night, and I was reminded how much Hawks seemed to love music and musical sequences in his films, judging by the sheer number of them over the decades. (I’m thinking especially of Ball of Fire, Gentlemen Prefer Blondes and that sappy sing-along jailhouse scene in Rio Bravo). And I began to wonder what the reaction would be if Morrison and his Moondance-era band were to time-travel back to Fort-de-France in Martinique in 1945 and play some of their tunes at one of the bars there, and if Hawks, Humphrey Bogart and Lauren Bacall happened to saunter in and listen. Albums don’t get much more mellow and soothing than Moondance, but it came out 25 years after To Have and Have Not and you never know. My guesses are that (a) Bogart, something of an upper-crust, old-school, wise guy know-it-all, would have scoffed at Morrison’s “wah-wah-wah-waaahah” singing style, but that (b) Hawks might have found a place in his head for it, and that (c) Bacall would’ve totally loved it. Especially “Caravan and “Into The Mystic.” If drunken Walter Brennan had stumbled in and listened he probably would have winced and shaken his head and stuumbled right back out again. I understand that Hoagy Carmichael could sometimes be a cranky, obnoxious shit so he probably wouldn’ve joined Brennan.

I don’t have any special inside track on Sundance ’15, but Rupert Goold‘s True Story, a true-life drama about a bizarre relationship between a discredited N.Y. Times journalist (Jonah Hill) and a family murderer (James Franco), is certainly at the top of my list thus far. Based on a memoir by ex-Times reporter Michael Finkel. Costarring Felicity Jones. Coproduced by New Regency Pictures and Brad Pitt‘s Plan B Entertainment.

President Obama‘s decision to recognize Cuba and attempt another, less belligerent approach to “that imprisoned island,” as JFK described it 52 years ago, is a good move. I’ve never visited Cuba and within a year or two I’ll probably be able to without much difficulty. For the sake of his likely 2016 Presidential run and because he’ll need to appeal to hinterland yahoos, Jeb Bush was obliged yesterday to sound like a hardline enemy of the dictatorial socialists who’ve been running things in Havana since early 1959. But Bush surely knows, and as anyone who understands why Communism toppled in Europe and Russia between ’89 and ’91 will tell you, when a population starts to get a taste for Western comforts, lifestyles and technology, Democratic change is all but inevitable. 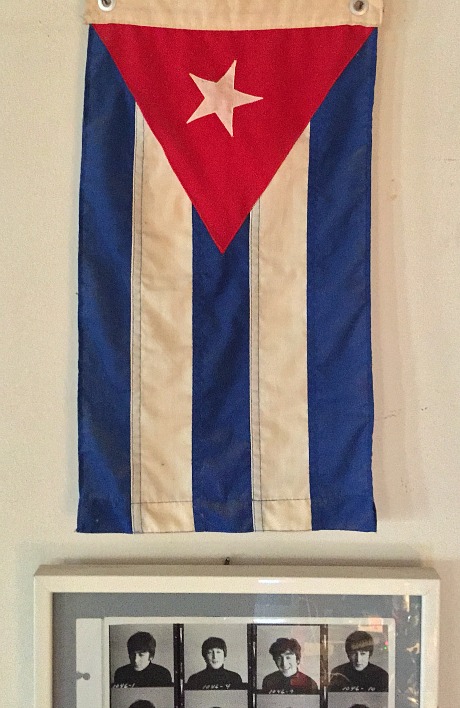 Flag of Cuba that’s been hanging above my desk for over a dozen years.
December 18, 2014 2:15 pmby Jeffrey Wells

10 Comments
Paramount to Indie Exhibs: We Can Be Cowardly Too!

Paramount has reportedly kibboshed plans by the Austin-based Alamo Drafthouse chain and by Cleveland’s Capitol Theatre to show Team America: World Police in place of the now-cancelling bookings of The Interview. A Deadline report says that Paramount “won’t be offering” Trey Parker and Matt Stone’s 2004 satire (which focuses on Kim Jong-Un’s dad, the late North Korean dictator Kim Jong-il) to Drafthouse or anyone else. Which means, I gather, that they’re not “offering” a DCP of the film. Are they also forbidding Drafthouse and others from projecting the Bluray? If I were in Austin or Cleveland I might be inclined to buy a ticket to a Team America Bluray presentation as a general endorsement of showing political satires on U.S. screens. 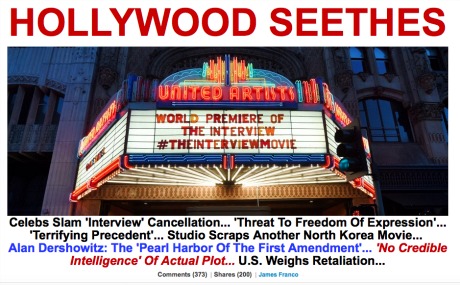 I understand, of course, that many if not most of those who glance at this week-old Elizabeth Warren rant won’t hit play and listen to her words about Citigroup. That was my response when I first clicked on it…”yeah, yeah, Warren again.” But you know what? That kind of attitude makes me part of the problem. So I listened again this morning, and I’m asking two things of the “Ready for Hillary” crowd. One, are you aware of any facts that argue with what Warren is saying here? And two, can you envision Hillary Clinton ever making a similar speech?