I consider it a sacred duty to attend a commercial screening of The Interview sometime on Christmas Day, and I don’t even like the film (which I saw about two weeks ago) all that much. It’s all about (a) celebrating First Amendment freedom and (b) doing my small part to make sure that independent exhibitors showing the Seth Rogen-Evan Goldberg film earn as much revenue as possible. I haven’t felt this patriotic in a long time…seriously. On top of which I feel sorry for them having eaten Sony’s reportedly tough terms (exhibitor-unfriendly percentage splits, no theatre security provided).

The curious aspect is that while a fair number of Los Angeles theatres will be playing The Interview, there are apparently only two small Manhattan venues showing it — the Cinema Village and Quad Cinema 4. (Or at least this seems the case as of 10:30 pm on Tuesday, 12.23.) I was going to take a Metro North train up to Yonkers and catch it at an Alamo Drafthouse cinema up there, but the West Village obviously trumps that.

Some of the Los Angeles-area venues showing the film are the Egyptian, Sundance Cinemas, Los Feliz 3 and Cinefamily plus reportedly 10 Regency cinemas throughout Southern California.

This documentary short by Josh Paler Lin, posted on 12.22, comes to a very affecting conclusion between 2:07 and 2:35. I won’t say how — you’ll see what I mean. A taste of that old-time Charles Dickens holiday spirit with a little touch of O. Henry. But Paler Lin blows it by not ending it at 2:35, which would have been perfect. Instead he keeps rolling for an extra two minutes and seven seconds so he can demonstrate to viewers (a) how emotionally affected he was by the surprise and (b) that he’s very generous when moved. The other wrongo is the pasting of JOSH PALER LIN on the lower right corner of the frame for the entire fucking video. This guy needs to take ego-diminishing meds immediately. Is he Justin Lin‘s kid or nephew or something?

This is a portion of a photo gallery on the wall of an old-style Italian delicatessen in Hoboken. I took the shot yesterday afternoon (Monday, 12.22). I understand that anything from The Godfather is considered highly romantic by Italian Americans. Okay, by everyone. But who frames a still of a guy being garroted in a place where people buy stuff to eat and take home? I’ll tell you who. People who are basically saying to the public and to themselves, “This, in a sense, is who we are. Okay, used to be. Now we just look back on it.” 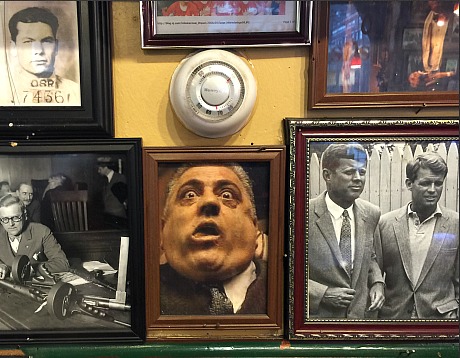 The last time I wrote about this upcoming Kevin Costner sports drama I called it “The Loneliness of the Long-Distance Hoosiers.” I see no reason to change or alter this impression. It is what it is, and that’s probably going to be fine with Whale Rider‘s Niki Caro at the helm. Maybe, I meant. 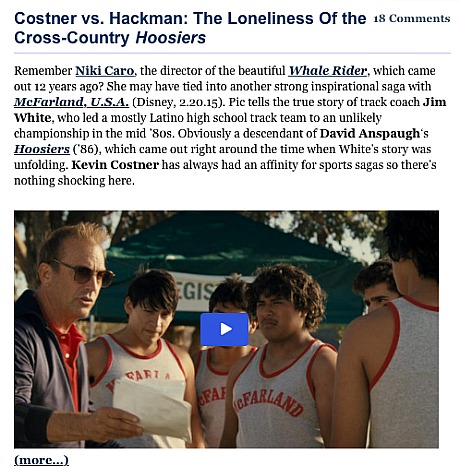 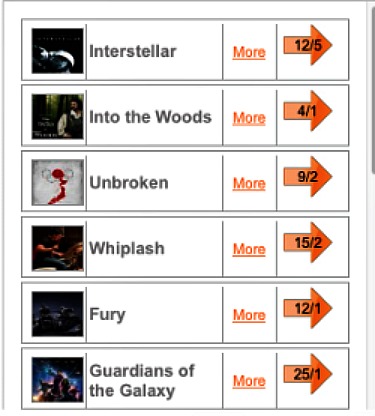 9 Comments
Sanchez To Academy: “Due Respect But What’s Your Blockage?”

The following statement was released today (Tuesday, 12.23) by Birdman composer Antonio Sanchez about the decision by the Academy’s music branch to disqualify his undeniably brilliant all-percussion score for a possible Oscar nomination:

“It was an honor to work on this wonderful film and collaborate with a brilliant director like Alejandro Gonzalez Inarritu on Birdman. I’m deeply disappointed that the music branch of the Academy did not recognize my score as eligible, even after receiving a detailed cue sheet, a letter from the president of music at Fox studios, and a description of the process from both Alejandro and myself.

“The disqualification seems to stem from the perception that my score was diluted by the incidental music on the film. I strongly disagree with this idea. The music that people remember after watching the movie is the sound, originality, character and strength of my score, which seems to be the reason it continues to receive attention, nominations, and awards, which I’m deeply humbled by. Some of the finest composers are members of the Academy and I’m saddened my score didn’t resonate with the decision makers.”

Seth Rogen and Evan Goldberg‘s The Interview will open after all on Christmas Day, but at very few venues — the Plaza Atlanta theatre and Tim League‘s Alamo Drafthouse are the only ones to announce bookings so far on Twitter. This is a total and very welcome reversal from Sony Pictures, which totally caved on releasing the film after an Asian hacker threatened U.S. theatres with 9/11-style incidents. On top of which Variety‘s Dave McNary is reporting there us “growing speculation that the studio will [also] offer the film via VOD.” Which they should have done immediately after canceling theatrical bookings. 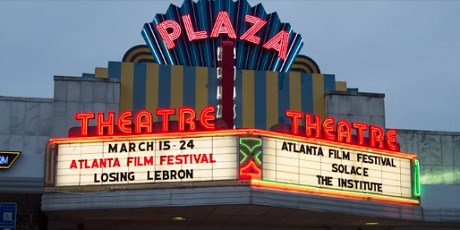 A statement from Sony chairman and CEO Michael Lynton: “We have never given up on releasing The Interview” — he was just pretending to have done so last week? — “and we’re excited our movie will be in a number of theaters on Christmas Day. At the same time, we are continuing our efforts to secure more platforms and more theaters so that this movie reaches the largest possible audience.”

It is essential, of course, that Rogen, Goldberg and Interview costar James Franco fly to Austin and Atlanta to take bows and raise their fists in honor of the film’s theatrical debut. I would fly to Austin in a heartbeat to attend the showings and cheer along with everyone else. The Austin and Atlanta bookings (along with the others) will be nothing less than (a) a celebration of First Amendment freedom, (b) a rousing “fuck you” to North Korean dictator Kim Jong-Un and (c) an “attaboy” back-pat to Sony for its better-late-than-never show of backbone.

Where will The Interview screen in New York City on 12.25? It’s not a very good film (here’s my 12.13 review) but I’ll be there with bells on if somebody screens it. I’ll buy a ticket and a buttered popcorn and everything. Update: It’ll play at the Cinema Village, the 13th Street Quad, at a plex in Williamsburg and an Alamo Drafthouse in Yonkers.