I shouldn’t be admitting this but I didn’t know quite what to say or think when I heard about the death of Luise Rainer, the two-time Oscar winner who lived for 104 years. That’s because I never wanted to watch The Great Ziegfeld (’36), for which Rainer won her first Best Actress Oscar, nor The Good Earth, for which she won her second Oscar. I just never wanted to watch either, and there are very few significant ’30s films that I haven’t seen. Wiki graph: “By winning two consecutive Oscars, Rainer later noted, nothing worse could have happened to her, as audience expectations from then on would be too high to fulfill. Some film historians consider her the “most extreme case of an Oscar victim in Hollywood mythology.”

Oscar nomination balloting began yesterday, of course. One of the big teeter-totter contests is over position #5 in the Best Actor race — Foxcatcher‘s Steve Carell vs. Nightcrawler‘s Jake Gyllenhaal. A popularity contest between two likable actors, one tall and buff and younger and broad-shouldered, the other a bit older and a bit shorter and narrow-shouldered and often bearded. Both playing sociopaths who are more or less inhuman. I’m a Gyllenhaal supporter because I recognize the monster inside Lou, the video shooter — open, eager, ultra-polite, calculating. He’s a creep you can deal with if you keep your distance. On the other hand Carell‘s John DuPont is somebody you just want to squash like a bug. You can’t help but admire the way Carell suggests all kinds of deep down fucked-up stuff — a mixture of pride, anger, maternal resentment, control-freak mania, homosexual repression and bad genes. I just think it’s fair to ask how arresting or standout-ish his performance would be without the prosthetic nose. For what it’s worth, Gyllenhaal over Carell. 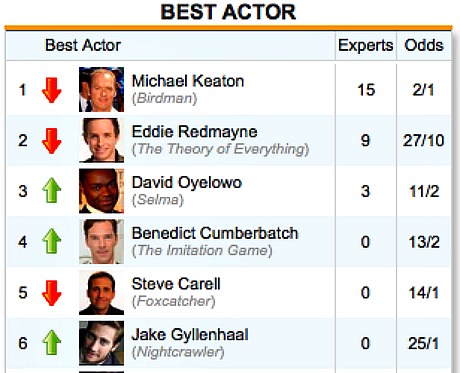 I love Mike Leigh‘s personality, his manner. He just says it and come what may. To me that’s the mark of a real artist. Several years ago he upbraided me at the Spirit Awards for asking the wrong kind of question. He didn’t like my attitude. He’s very blunt and real. In this Hollywood Reporter round-table discussion he’s asked about the prospect of developing a film for 12 years, and Leigh says “I haven’t got 12 years.” Neither Mr. Turner nor Leigh are likely to be nominated for Best Picture or Best Director, but he’s a very good guy. You know who might be nominated for Best Director? Angelina Jolie. Because Unbroken made so much money over the Christmas holiday.

32 Comments
Let Me Get This Straight

Everything all along has pointed to North Korea being the prime mover behind the Sony hack. The North Korean government has denied involvement but otherwise indicated it was completely delighted with the results of the hack. On 12.17 N.Y. Times reporters David Sanger and Nicole Perlruth ran a story saying that “senior administration officials who would not speak on the record about the intelligence findings have concluded that North Korea was ‘centrally involved’ in the hacking of Sony Pictures computers.” An apparent response followed when North Korea’s internet was blacked out, presumably by Obama administration operatives.

But now UPI.com’s Francis Burns is reporting that the hacking may have been an inside job by a disgruntled former Sony employee. A woman, in fact. Kurt Stammberger, a senior vp with the security firm Norse, believes [that] “the hacking was an inside job. Stammberger said the team has even identified one possible perpetrator, a woman who worked for Sony for 10 years before losing her job in a recent reorganization.”

Hold on…I’m not following. The whole North Korea narrative is, what, imaginary? Or did this woman somehow feed information to someone else who assisted the Guardians of Peace, the hackers who claimed responsibility for the Sony hack? I’m completely confused.

In response to Joseph Califano‘s 12.26 Washington Post Op-Ed piece that sharply disputed Selma‘s portrayal of President Lyndon Johnson as being reluctant to support voting rights legislation, director Ava DuVernay tweeted yesterday that “folks should interrogate history…don’t take my word for it or LBJ’s rep for it…let it come alive for yourself.” I tried that yesterday by reaching out to LBJ historians Robert Caro, Robert Dallek and Ronnie Dugger…no dice. DuVernay’s film essentially portrays Johnson as a pragmatic, vaguely patronizing racist (i.e., that dismissive pat on the shoulder of David Oyelowo‘s Martin Luther King) who had to be pressured into pushing for the 1965 Voting Rights Act. Tom Wilkinson‘s LBJ “offers a few shadings and nuances,” as I noted yesterday, “but mainly you remember his disagreements with King and saying ‘not now.’” So this morning I captured this anecdote from former Johnson administration attorney Roger Wilkins in David Grubin‘s LBJ, a PBS American Experience doc that originally aired in 1991.

How reluctant was Johnson to push for voting rights legislation in early ’65? Was he in fact reluctant, as Selma dramatizes? Perhaps he expressed concerns along these lines at some point. But yesterday’s HE story contains a White House recording of a 1.15.65 discussion between Johnson and Martin Luther King that undermines Selma‘s view.

David McCullough‘s narration of LBJ quotes Johnson as saying that while some men have called the White House a prison, “I’ve never felt freer.”

There’s a story that came from James Farmer, leader of the Congress of Racial Equality, in an 8.24.08 New Yorker story by George Packer called “LBJ’s Moment”: “I asked him how he got to be the way he was,” Farmer recalled. “He said, ‘What do you mean?’ I said, ‘Well, here you are, calling senators, twisting their arms, threatening them, cajoling them, trying to line up votes for the Civil Rights Bill when your own record on civil rights was not a good one before you became Vice President. So what accounted for the change?” Johnson thought for a moment and wrinkled his brow and then said, ‘Well, I’ll answer that by quoting a good friend of yours and you will recognize the quote instantly. ‘Free at last, free at last. Thank God Almighty, I’m free at last.’”’

Thanks to Awards Daily‘s Ryan Adams for slapping this together. I didn’t know he had the skill set. The bird-helmet hair is really quite exacting. Must have taken a while to get right. Hats off. 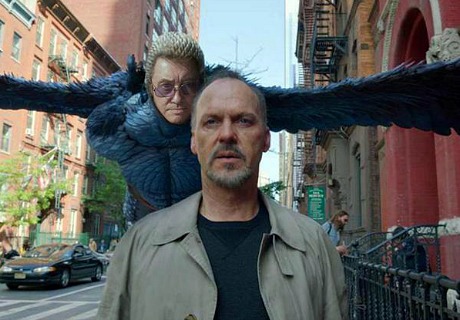