I have to say that Steve Carell did a good job of capturing the Real McCoy. You can smell the creepiness, the malignancy. Are DuPont’s extended video riffs (minus a questioner or any give-and-take conversational vibe) bizarre or what? Did he rehearse or is he reading off cue cards? Foxcatcher director Bennett Miller decided against showing us the cows and the fishing hole.

Upon moving in with his married best friend Steve (Mark Duplass), Alex (Steve Zissis) says he can’t take “any beautiful L.A. people lookin’ at me like I’m a whale…they wanna fucking harpoon me.” That’s me — I’m one of those people. Actually not. When I see guys like Zissis I make a point of ignoring their whale-ness and concentrating on their minds and their souls, and that’s where it stays. But there’s no way I would fuck Zissis if I was Amanda Peet, who was double class-A material when younger and who still looks pretty hot, and yet her character in HBO’s Togetherness (debuting on 1.11.15) is so lonely and uncertain that she decides Zissis isn’t such a bad option and becomes his girlfriend. No way. A woman like Peet (I’ve known several like her) would never settle for a lardo with a loser profile (i.e., a guy who has had to move in with friends because he can’t pay his rent). But it happens in Togetherness because the politically correct view is that beefalo bods are just a trait and that some women are down with heavy guys and everybody goes through economic downswings, etc.

Over the last three months I somehow got turned around on Josh Brolin and George Clooney‘s roles in the currently-shooting Coen Bros. film Hail Caesar!, which is basically the fourth movie in their Numbskull Quartet with Clooney, following O Brother Where Art Thou?, Intolerable Cruelty and Burn After Reading. Last June I said I didn’t know who was playing who but more recently a vision of Clooney playing a big-studio manager-fixer named Eddie Mannix took hold along with Brolin as a none-too-bright movie star named Baird Whitlock. Wrong. Brolin has the Mannix role, which is the lead, and Clooney is Whitlock, a supporting part amidst a family large ensemble. 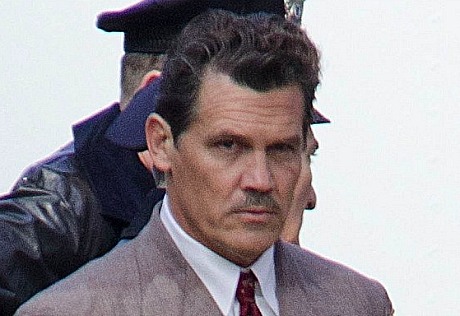 Brolin as Eddie Mannix, based on the real-life MGM vp who oversaw the day-to-day and put out fires. Brolin’s Mannix performs the same function for the fictitious Capitol Pictures.
December 1, 2014 1:09 pmby Jeffrey Wells

In my recently-posted piece about the 2014 New York Film Critics Circle winners, I expressed profound puzzlement about Marion Cotillard winning the Best Actress prize for her performances in Jean-Pierre and Luc Dardennes‘ Two Days, One Night as well as James Gray‘s The Immigrant. “Where did this Immigrant love come from?,” I asked. “What cabal of James Gray loyalists got together and rammed this through?”

A few minutes ago a friend explained that nobody has been talking about Cotillard as a Best Actress candidate at least partly because of the lackluster backing of the Weinstein Company.

“Even after The Immigrant trounced all other Weinstein titles (most notably, The Imitation Game) with both the Spirit Award nominating committee and now the NYFCC, the Weinstein Co. does not even list The immigrant on its ‘awards season’ screening RSVP website or its guild-friendly site, and until sending out an online screener to members of NYFCC in the middle of Thanksgiving weekend, had made no visible efforts to promote the film whatsoever.

“This in spite of the fact that The Immigrant had rave reviews pretty across the board when it opened last spring (76 on Metacritic to Imitation Game‘s 71 and Theory of Everything‘s 72). But I know, I know…it’s so much more interesting to theorize a burgeoning James Gray loyalist cabal in the NYFCC than going off the empirical evidence!”

The New York Film Critics Circle used to represent an elite standard (and by that I don’t mean ingrown and dweeby). It really mattered to win one of their awards because they didn’t suffer fools and only the creme de la creme contenders were considered. Four years ago they gave their Best Picture award to The Social Network…exactly! But they’ve gradually become more easygoing as far as admitting new members were concerned over the last few years and so their choices have begun to feel less and less discriminating, at least as far as Best Picture choices have been concerned.

In my mind the NYFCC shit the bed when they gave their 2011 Best Picture award to The Artist — that was a sign that they could adopt the mindset of the Academy of Motion Picture Arts & Sciences if so moved. Okay, AMPAS with a vague sheen of East Coast urbanity. From then on I’ve been grimly acknowledging that the NYFCC of legend was no more. Agreeable surprises can still happen, but no longer do they necessarily represent gold-standard honors decided by critics of serious merit. Certainly not in a Best Picture context. The consensus gene has gotten into the bloodstream.

And yet this year is different — more than a bit curious — with Mr. Turner‘s Timothy Spall winning for Best Actor, Marion Cotillard winning for The Immigrant and Two Days, One Night (seriously?) and Darius Khnodji‘s fine but unremarkable work on The Immigrant taking the Best Cinematography award…what? Where did this Immigrant love come from? What cabal of James Gray loyalists got together and rammed this through?

But let me explain something very clearly: Nobody has been talking about Marion Cotillard as a Best Actress contender of any consequence. Nobody at all. She’s clearly genuine and stressed-out and crumbling in a non-actressy way in the Dardennes Brothers film but c’mon, going door to door and asking her co-workers for the same consideration in scene after scene after scene? In my book she phoned in her performance in The Immigrant. Quote from my 5.24.13 review: “Cotillard isn’t playing a character named Ewa as much as playing herself playing a character named Ewa. I only know that Ewa/Marion never seems to play her cards with any kind of deception or cleverness, like anyone would. She’s always just surveying the sordid nature of 1921 New York City with those big, watery, guilt-tripping eyes.”

Spall turned in an admirable, authentic-seeming performance in Mr. Turner but many couldn’t understand half his dialogue, or at least I couldn’t when I saw the film in Cannes. Don’t kid yourself — landscape painter J.M.W. Turner was known to speak in a slurry, guttural lower-class accent. Spall reiterated this in a recent phone interview I did with him, and said that he went for his less-than-decipherable quality. I have the screener now so I’m going to re-watch — maybe the dialogue will come through a bit clearer this time.

J.K. Simmons has won Best Supporting Actor award for his performance as an inspired but demanding and at times malevolent Julliard-type music instructor. I would have voted, due respect, for Birdman‘s Edward Norton but I have no quibble with Simmons, who will definitely be AMPAS-nominated and most likely win the Oscar. A totally expected consensus choice but fine.

I don’t know if Angelina Jolie‘s Unbroken (Universal, 12.25), which everyone saw Sunday afternoon at the WGA theatre on Doheny, will nab a Best Picture nomination or not, although it could. It’s very well crafted. I can honestly call it admirable, grade-A filmmaking. Anyone would. And it comes straight from Angie’s heart and innards so you can’t call it dispassionate or cynical.

To be honest I began looking at my watch around the 60-minute mark, but I was never dozing or uninterested or bored — I just don’t like being tortured, starved and beaten for 27 months straight, which is what occupies the last 75 minutes.

Unbroken is basically a film about the nobility of long-term suffering, and how that can be (and can be made to seem like) a good thing in a spiritual sense. Or…you know, a good thing if you take the long God’s-eye view.

Because in a close-up view being tortured and beaten and deprived in three Japanese prisoner-of-war camps is a ghastly situation for Jack O’Connell‘s Louis Zamperini, a real-life guy and subject of Laura Hillenbrand‘s best-selling “Unbroken” who passed last July at age 97. And it’s really not that much of a swell picnic for the audience, truth be told. But it delivers a good kind of suffering. One that feels vaguely Christian and conservative on some level. Something tells me the Orange County crowd will find a place in their hearts.