I’ve been assuming all along that Sam Taylor-Johnson‘s Fifty Shades of Grey (Universal, 2.13) is probably going to be a difficult sit, possibly even a painful one. It would be derelict, of course, to ignore a film expected to be this huge. But part of me wants to duck it in the same way I routinely duck Asian action cinema. What’s the point? On top of which I was disappointed when I saw that Dakota Johnson, who was up to something cool in that scene with Justin Timberlake in David Fincher‘s The Social Network, had dyed her hair a kind of mousey brown. I didn’t much care for Taylor-Johnson’s Nowhere Boy but I respect producer Michael DeLuca and screenwriter Kelly Marcel so let’s see.

Earlier today I again failed to write some kind of review of Michael Mann‘s underwhelming Blackhat. My immersion in that urban existential angsty machismo thing has been a profound deal for me, especially as manifested in Thief, Heat, The Insider and Collateral. I was even a fan of nearly all of Public Enemies (particularly that socko ending scene between Marion Cotillard and Stephen Lang) but that film was the first indication that Mann might be losing some of the touch. And I guess I’m confessing that the failure of Blackhat feels so…the word isn’t shattering. I don’t know what to call it. Profoundly fatiguing? Soul-collapsing? I only know it’s been very difficult to put words to page. I also know that the guy who directed the Kate Mantilini scene between Al Pacino and Robert DeNiro in Heat had nothing to do with Blackhat, and it pains me to say that a lot more than it might pain Mann to read it. I guess I could try writing a bit more but I want to be done with this as quickly as possible. When I come back from a quick errand I’m just going to talk through my issues and disappointments and then post an mp3. I know I can do that, at least.

John Hardwick‘s The Eichmann Show (BBC Two, 1.20) is a behind-the-scenes tale of how the 1961 trial of Nazi war criminal Adolf Eichmann was captured on TV by Milton Fruchtman (Martin Freeman) and blacklisted TV director Leo Hurwitz (Anthony LaPaglia). Filming at the trial in Jerusalem in 1961, Fruchtman and Hurwitz’s presentation was edited daily and broadcast in Germany, America, Israel and 34 other countries. The release says it “became the world’s first ever global TV documentary series” and for the first time “conveyed the horror of the European concentration camps directly from the mouths of its victims.” LaPaglia looks older…heavier, whitewalls.

The Church of Scientology has paid for a full-page ad that preemptively denounces Alex Gibney‘s Going Clear: Scientology and the Prison of Belief…of course! The Scientologists have always aggressively gone after their critics so who’s surprised? The presumably scathing documentary will premiere on Sunday, 1.25, at the Sundance Film Festival, and then have a modest theatrical run before an HBO debut on March 16. What’s new to say about these dickheads anyhow? Scientology exposes were journalistically intriguing in the mid ’90s. Occasional hiccups and rants from Tom Cruise certainly brought renewed attention to the controversial church over the years. But when I first read about Gibney’s doc I kinda went “meh.” As Michael Cieply notes in a 1.15 N.Y. Times piece about the full-page ad, “The church’s forceful response risks calling attention to what might have seemed like old news.” But who am I to pre-judge? I’ll be there with bells on when Going Clear has its first peek-out at the MARC theatre at 2:30 pm. 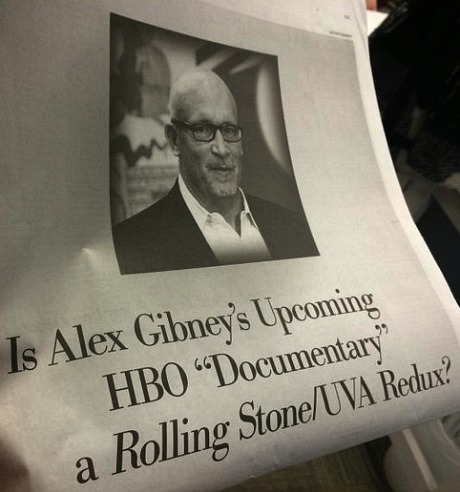 After being handed an MVP Award at last night’s Critics Choice Movie Awards (which I attended, sitting at table #49), Jessica Chastain spoke of the general need for more “diversity.” Right now diversity is a p.c. code term that means Selma‘s Ava DuVernay should have been nominated for a Best Director Oscar (it would have been a nice token gesture) and David Oyelowo should have been nominated for Best Actor (okay but who would he have bumped?). Things would feel more congenial if this had happened, for sure, but I still don’t think Selma is good enough to be celebrated as one of the year’s absolute best. That’s a minority opinion, I recognize. It can also get you branded as someone who doesn’t quite get it and who should perhaps (what do you think, guys?) be kept at arm’s length. Trust me — that’s what the cool kidz are saying without actually saying. Get with the pro-Selma mentality or we won’t let you attend parties and meetings in our little clubhouse.

“Today is Martin Luther King Jr.’s birthday, so it got me thinking about our need to build the strength of diversity in our industry,” Chastain said, “and to stand together against homophobic, sexist, misogynist, anti-Semitic, and racist agendas. I’m an optimist, and I can’t help but feel hopeful about the future of film, especially looking at all these beautiful people in this room. Martin Luther King Jr. said, ‘Our lives begin to end the day we become silent about things that matter.’ And I would like to encourage everyone in this room to please speak up.”

That’s funny because we all know what that means apart from what King meant originally. It means that “we all need to tell the conservative, sentimental fuddy-duds to back off and reconsider because this is right effing now and we need to nominate and celebrate films like Selma because that Norman Jewison world all you grandpas grew up with is no more.”

Yes, agreed, of course. And I trust I don’t need to prove to anyone that nobody despises the Academy fuddy-duds more than myself. But that still doesn’t mean Selma is anything more than a good, sturdy capturing of a noble, tumultuous struggle. Y’all need to calm down.

I almost fell out of my chair this morning when I read the following sentence by Salon‘s Andrew O’Hehir: “You can certainly defend, in the abstract, the idea that movie awards should be entirely about the art and craft of cinema, not about who made the movies.” Really? We’re allowed to say such a thing? But if we do, won’t we get ourselves into trouble?

That 1.66:1 French Bluray of Pork Chop Hill that I mentioned on 1.5 arrived yesterday. Some might think it eccentric if not wasteful to buy a Bluray of this 1959 Lewis Milestone-Gregory Peck war film when I can just as easily rent a high-def version on Amazon.com, but the Amazon version is cropped at 1.78 and the recently-popped Olive Bluray is cleavered at 1.85, and there’s a world of difference between these and 1.66. Consider the 1.66 vs. 1.85 screen captures below — either you get it or you don’t. The only problem with the import is that I can’t seem to kill the French subtitles when I play the original English-language version. 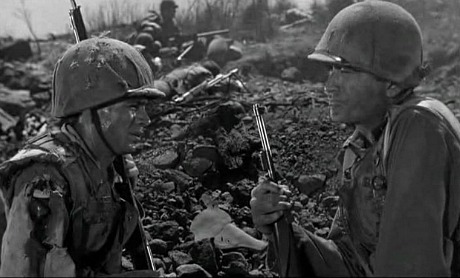 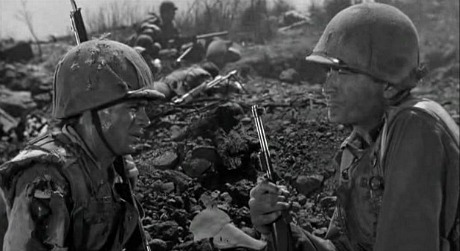 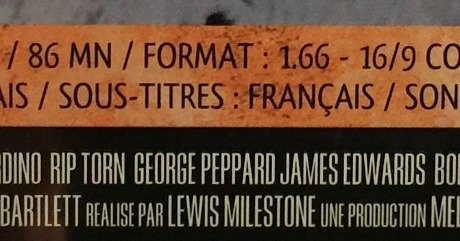 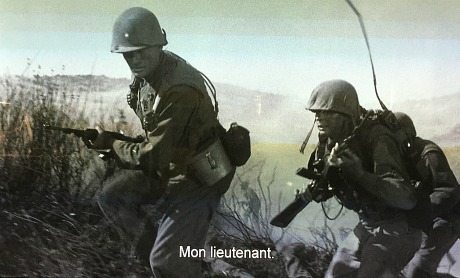 2 Comments
Adults to Great-Grandkids: Have Fun!

Yesterday a report summarized in Science, the respected journal, reminded the thinking, semi-conscious world of the same old environment tune for the umnpteenth time — i.e., the earth is not only becoming less and less hospitable, but in the coming decades our once-green planet “could cease to be a ‘safe operating space’ for human beings.” The report explains that we’ve already crossed four “planetary boundaries” — the extinction rate, deforestation, the level of carbon dioxide in the atmosphere, and the flow of nitrogen and phosphorous (used on land as fertilizer) into the ocean.

ADD translation: The report basically says that the grim environmental slide is getting steeper and that we’re all shitting the bed faster than previously understood. You thought things seemed bad when An Inconvenient Truth popped eight years ago? Wake up and smell the new brew.