Support on Patreon Follow @wellshwood
102 Comments
The Hell He Said

During a Sundance Film Festival sit-down this evening with Robert Redford, producer George Lucas, who single-handedly destroyed the Arthurian-legend aspect of the Star Wars franchise by trivializing Return of the Jedi with furry Ewoks and a happy bonfire ending and particularly by turning the intensely disliked prequels into kid-friendly merchandising machines, complained that today’s movies “are more and more circus without any substance behind it.” True, but when’s the last time Lucas stood up and delivered a film with serious substance? Answer: 34, 35 years ago when he produced The Empire Strikes Back (’80). Which Lucas once called the least effective or satisfying Stars Wars film of the six…brilliant.

TMZ is reporting that Suge Knight got into a fight today on a movie set in Compton, jumped into his SUV, floored it in reverse, ran over and killed an alleged friend named Terry Carter, and then fled the scene. “Multiple witnesses tell us a movie was [being filmed] with Ice Cube and Dr. Dre when Suge pulled up in his car,” TMZ reports. “We’re told security told Suge to leave and that’s when trouble began.” I don’t mean to sound cynical but isn’t this what Knight often does? Get into rage-fueled violent encounters, I mean. Always with the blam-blam or the wham-bam. An innocent man dying is never a ho-hummer, but it almost is when you factor in Knight’s reputation.

I’ll always be a devout fan of Rodney Ascher‘s Room 237 because it’s a treasure chest of endless imaginative theorizing about Stanley Kubrick‘s The Shining. I loved the fruit-loop quality. But his latest, a documentary about sleep paralysis called The Nightmare, is almost completely devoid of imaginative riffing of any kind. The film is entirely about descriptions of creepy, real-deal encounters with “shadow men” — Freddy Krueger-like spooks who have terrorized several real-deal folks in their bedrooms (always in the wee hours) and caused them to freeze and be unable to speak and in some cases have trouble breathing. It just goes on and on like this for 90 minutes…”I was half-sleeping and then I felt something and the boogie man was behind me,” etc. Okay but what’s really going on? Why these people and not others? (Ascher himself has been visited.) What kind of scientific proof has been collected? Has anyone ever found any physical evidence, made any recordings, observed changes in electrical energy…anything? One tip-off is that a female victim says that the spooks went away one night when she said the name of Jesus. (What if she’d said Yeshua or Buddha or Sri Krishna?) Another is that the shadow men seem to be a manifestation of individual weakness, vulnerability and fear. But why do the goblins all look like the same (some along the lines of the monster in Michael Mann‘s The Keep) or alien-like creatures with huge serpent eyes? I’m not saying the victims are making stuff up, but just hearing their descriptions over and over isn’t enough. I began to feel antsy about a half-hour in.

Universal Pictures is about to pull the trigger on a Chris Pratt action-fantasy flick called Cowboy Ninja Viking Samurai Street Fighter Fucknose Bare-Knuckled Stud With a Nine-Inch Wang. Pic will be co-directed by David Leitch and Chad Stahelski, whose John Wick wasn’t too bad for the most part. Sources have told Variety‘s Justin Kroll that Pratt has met with Leitch and Stahelski between servings of cheeseburgers and fries and “has given his stamp of approval.” Based on a graphic novel (what else?), the story follows “a man who suffers from multiple personality disorder and is put into a government program to be turned into a super-soldier” with the attributes of a cowboy, a ninja, a viking, a samurai, a street-fighter and a fucknosed, bare-knuckled stud with a nine-inch member. I’ve already explained…okay, indicated…that Leitch and Stahelski are robo-directors, and that they (along with Zack Snyder and all the other zombies in good standing) represent everything about the action-fantasy-superhero franchise business that is rancid, puerile and devoid of a soul. I’ve also noted that Stahelski is the last name of an electrician, a surfer, pool-maintenance guy, a hot-dog chef at Pinks, a garbage man or a guy whose grandfather worked in the same New Orleans factory as Stanley Kowalski.

After eyeballing a Twitter link last night to a Grantland essay about the greatness of Gene Hackman (except for his performance in The Poseidon Adventure), I too wondered if the retired octogenarian had left this mortal coil. That’s because the headline read “The Greatest Living American Actor at 85: Gene Hackman Is Gone But Still in Charge.” There aren’t too many different ways of interpreting the word “gone.” It means “not here,” “elsewhere,” “took a powder” or maybe dead. Gone Girl alludes not just to a disappearance but a permanent state of absence. After thinking it over for ten or twelve seconds I realized Hackman was probably still with us, but others feared the worst. A Hackman spokesperson has told ABC News that Popeye Doyle is alive and well and walking around. Grantland has erased the word “gone” and all is back to normal. 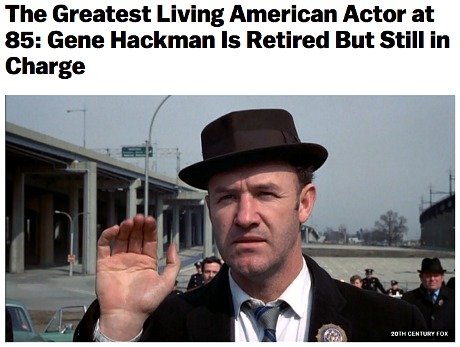 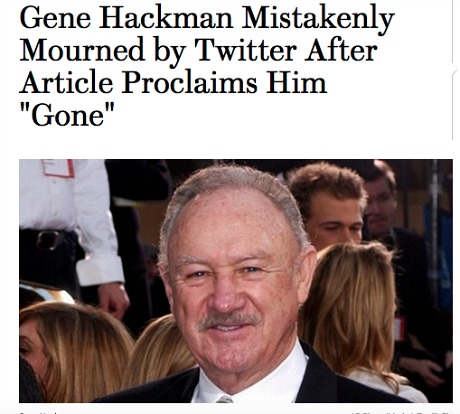 Here’s a blink-and-you’ll-miss-it teaser for the trailer for Brad Bird‘s Tomorrowland (Disney, 5.22). The real thing will play during Sunday’s Superbowl telecast. It’ll probably turn out to be a moderately satisfying commercial ride, but like I said on 10.9.14, the hand of Damon Lindelof scares me: “To me, Lindelof attached to a film or TV project constitutes a threat. They don’t mean ‘this movie will be shit’ but they do mean ‘okay, here we go on the fucking inconclusive Lindelof train to Meanderville.’

“After slogging through the frequently infuriating The Leftovers I’m convinced that Lindelof isn’t so much a story-teller as a situational explorer. He’s strikes me as this dorky, bespectacled, comic-book-generation guy who goes ‘Oooh, here’s a cool idea! What if this happened and that happened and then our lead character suddenly realizes…well, let’s not get hung up on resolutions but this is a cool realm…let’s play with it!’

“Lindelof was one of the many architects of Cowboys & Aliens but I’m sure he did what he could to imprint himself upon it, and I hated it. He rewrote Jon Spaihts on Prometheus and I double-hated that one. The Star Trek film he co-wrote was okay, but World War Z was basically a situational zombie slog with no way out, and then came The Fucking Leftovers.

Make no mistake — Mike Binder‘s Black or White is a strong, nervy film that deals fair cards, as Steve Harvey acknowledges in an episode airing on Friday, 1.30. But many critics have slapped it down for, I believe, not saying the right things in the right way. Some are claiming it deals from a stacked deck; what they really mean is that they don’t like the hand. Here’s my Toronto Film Festival review. As I said on 12.3.14, Black or White “wears its emotions a little too plainly at times, but Binder’s script doesn’t slavishly follow the sensitive liberal line about the black-white chasm and the stereotypes that cling to that, and so it’s been thrown under the bus.”

If Ava DuVernay had directed and co-written Black or White and cast Kevin Costner as the lead, would the reception be the same? I suspect that DuVernay’s Black or White would have been saluted and celebrated a hell of a lot more than Binder‘s version has been. The only difference between Binder’s Black or White and DuVernay’s is that Ava would have gone easier on the Reggie character by removing the drug problem and making him an attorney or a doctor. It’s not just the movie these days — it’s the combination of the right movie and the right filmmakers behind it.