The final Gurus of Gold Oscar prediction chart calls it an even Best Picture match between Birdman and Boyhood…well, just about even. The Gold Derby gang seems a little more realistic with 17 experts or 54% predicting a Birdman win vs. 12 Boyhood boosters or 39%. Eight Guru loyalists are riding those sinking Boyhood ponies to the bitter end, down to the sea in ships: Greg Ellwood, Peter Howell, Dave Karger, Mark Olsen, Nathaniel R., Sasha Stone, Anne Thompson, Susan Wloszczyna. 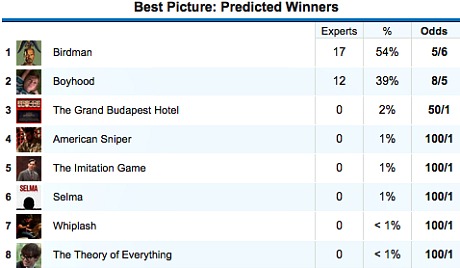 Grantland is offering five video chapters of amusing, sometimes sage Oscar commentary from Wesley Morris, Chris Connelly and Bill Simmons (who writes about movies…what, once a year if that?). Simmons claims that Ed Norton gives an even better Birdman performance than Michael Keaton….arguable! Topics: (a) How to Sound Smart at an Oscars Party; (b) Best Actor and Actress: What’s At Stake?; (c) Personal Favorite Performances; (d) Sports Doppelgangers and (e) Sal’s Oscar Props. (Sal is Jimmy Kimmel‘s gambling-junkie cousin.) 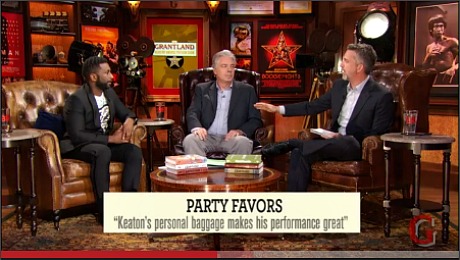 The serial rapist allegations of the last three months have turned Bill Cosby into comic dog meat. You can tell jokes about him any damn way you choose and audiences will laugh and Cosby can’t say a damn word. He’s over, toast, kaput. But according to some tweets posted this evening by Norm MacDonald, Eddie Murphy refused to mock Cosby during the “Celebrity Jeopardy” skit on last Sunday night’s Saturday Night Live 40th Anniversary Special. Murphy didn’t want to dump on Cosby, McDonald tweeted, even though “he knew the laughs would bring the house down. Eddie decided the laughs [were] not worth it. He will not kick a man when he is down.” Update: NBC News has reported that Cosby is grateful. “I am very appreciative of Eddie and I applaud his actions,” the 77 year-old comedian said. 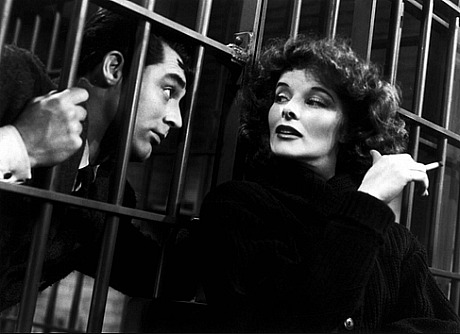 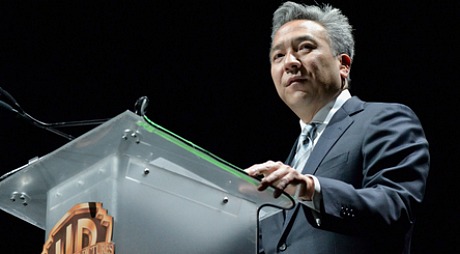 I’ve written that while I don’t regret posting an honest, blunt response to Nicholas Winding Refn‘s Only God Forgives during the 2013 Cannes Film Festival, I feel badly about hurting Refn’s feelings. On top of which he was entirely gracious about it when we chatted two months ago during a 20th Century Fox holiday party. I’ve previously noted that the pan I wrote is memorialized in Liv Corfixen‘s My Life Directed by Nicholas Winding Refn, a Heart of Darkness-like doc about the making of Only God Forgives. It’s basically an honest look at a good filmmaker going through the usual doubt and pain; Corfixen is just as candid in portraying their healthy but less-than-ideal marriage. (Is anyone’s marriage “ideal”?)

The doc will play at L.A.’s Cinefamily between 2.27 and 3.5. Corfixen and Refn will attend on opening night. I think that in all fairness I should also attend and take video and so on.

The Hollywood Reporter‘s Scott Feinberg has posted Oscar-race opinions from a refreshingly blunt-spoken, presumably long-of-tooth female Academy member who hails from the public relations branch, and I’m telling you that if this woman wrote a daily online column with this kind of double-barrelled candor I’d be worried about the competition. Her views about Citizenfour are appalling (Edward Snowden has “a God complex”?) and stating that Birdman‘s “single-shot thing gave me a headache” probably reveals more about her core psychology than the film, but otherwise everything she says cuts right through the b.s. and the hoo-hah. Terrific stuff. 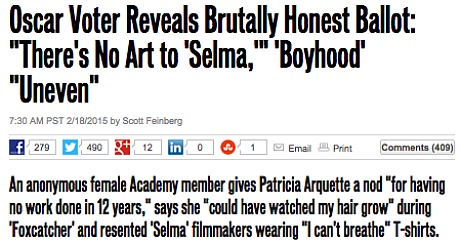 Quote #1: “I put in the Inherent Vice screener, and it became apparent that it’s a terrible, incoherent movie, so I turned it off. I thought it was not possible for me to hate something more than I hated The Master, but I hated this more.” Quote #2: Boyhood‘s Patricia Arquette “gets bonus points for having no work done during the 12 years. If she had had work done during the 12 years, she would not be collecting these statues.” Quote #3: “When a movie about black people is good, members vote for it. But if the movie isn’t that good, am I supposed to vote for it just because it has black people in it?” (HE response: “If you wind up writing a column you can’t say stuff like this. You’ll get beaten up by the p.c. Stalinists and guys like David Poland will tweet that you’re a racist. Trust me.”) Special “take heed, Sasha Stone and Anne Thompson” quote: “If you told me when I saw Boyhood that it would win best picture — or even be in the running — I would have told you that you were insane. I thought it was ambitious and a directorial triumph, but I never thought, ‘Wow, this is The One!'” HE aside: Is this woman friendly with Steve Pond by any chance?

I posted this clip 15 months ago, or about ten weeks after Dakota Johnson was chosen to star in Fifty Shades of Grey. This short little scene is so much better than the entirety of Fifty Shades — better written, acted, edited, scored — that saying so in this sentence is one of the worst redundancies I’ve ever committed as a writer. This is how it’s done, what it feels like. Right away you want to sink in and stay there. It makes you want more. I was more or less okay with the opening hour of Fifty Shades but restless and irked during the second hour, and that’s when a good film should be making sure you’re invested and enthused by delivering a scene like this one. Which arrives (correct me if I’m wrong) right around the 60-minute mark in The Social Network. Johnson was 20 when she shot this; she’s now 25.

I’ve re-posted my raves about David Cronenberg‘s Maps to the Stars once too often so here’s an excerpt from Peter Howell’s review: “Kicking at Hollywood foibles is as easy as booting an overripe Halloween pumpkin, [but] it’s a hoot to watch. Watching these appalling people brings to mind the exchange in All About Eve where Gary Merrill scolds Bette Davis for her acid tongue. ‘Have you no human consideration?’ he asks. Her reply: ‘Show me a human, and I might have!'”