James D. Cooper‘s Lambert & Stamp was irrefutably one of the top eight films I saw at the 2014 Sundance Film Festival. Yes, the one that happened fourteen months ago. It played again at the Sundance London Festival a few weeks later, and then it was vaya con dios for about a year. Now it’s finally back and opening commercially on 4.3. The guys behind The Who — a good yarn, punchy…H.G. Wells‘ The Time Machine. And yet it’s partly another tale about a rock-music guy (in this case Kit Lambert) who got lost in a louche lifestyle and succumbed to drugs at a relatively young age (45).

With Alex Gibney‘s two-part, four-hour Frank Sinatra doc airing on HBO 20 days hence, I found myself googling a bunch of Sinatra material. And somewhere along the way I came upon his will, which was finalized in 1991. A friend with some first-hand experience with wills tells me that Sinatra’s is the best she’s ever read. So here it is. If you’ve nothing better to do on a Saturday afternoon (apart from getting some exercise, reading a great book, riding a bicycle on the beach or savoring some Indian food), have at it.

“I, FRANCIS ALBERT SINATRA, also known as FRANK SINATRA, declare this to be my Will and revoke all former Wills and Codicils. I am a resident of Riverside County, California.

The first-anywhere screening of Luke Meyer‘s Breaking a Monster just concluded at South by Southwest. It’s a decently assembled success-story doc about Unlocking The Truth, an African-American classic metal trio who were 12 and 13 when the footage was shot a year or so ago. It’s about how they built upon the novelty of “black kids playing metal” along with some serious YouTube popularity by joining forces with veteran music manager Alan Sacks. It takes the band forever to crank out a catchy, listenable song but they finally do, and eventually they land a $1.8 million record deal with Sony Music.

My initial reaction: “Basically meh, yeah, not bad, so-so but not enough information. The whole thing about Unlocking The Truth is the novelty (black teens doing metal) and the Times Square YouTube trending and people around them (especially Sacks) getting ahead of themselves in thinking ‘wow, these guys are unusual…and really young!…and sellable!” I’ve never been a metal fan. Ever. And I kept asking myself ‘okay, but where’s the beef when you get past the novelty? Where’s the song or songs that people are looking for?’ Isn’t that what makes a band successful? The songs they write and sing and the way they’re recorded/performed? Or am I missing something?

I can’t overstate how jolting and invigorating and even ground-shifting Ondi Timoner‘s Brand: A Second Coming plays, especially during the second viewing and especially when it hits the 40-minute mark, which is when the story of Brand’s social-political awakening kicks in. It’s a brilliant, go-for-it thing that not only portrays and engages with a brilliant artist-provocateur but matches his temperament and picks up the flag. Superb photography by Timoner (especially loved the occasional punctuation of grainy 8mm) and HE’s own Svetlana Cvetko. The doc constantly pops, riffs and punches over its nearly two-hour running time. Magnificent graphics and editing, and a perfect ending. 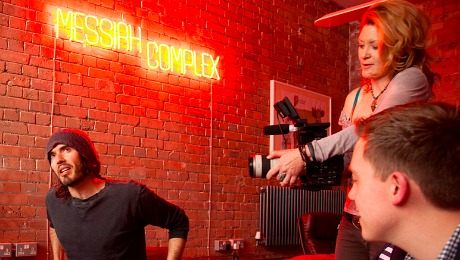 What’s significant is that the lives of Che Guevara, Jesus Christ, Mahatma Gandhi and Malcolm X, whom Brand identifies with and admires, had a similar dramatic arc in that they finally “became” after floundering around — Che as a son of Argentine privelege, Jesus as a stay-at-home carpenter until he was 30, Malcolm X as a pimp and an incarcerated con until he was awakened by Elijah Muhammed, etc. Similarly Brand became truly interesting and transcendent when he stopped projecting like a hyper, swaggering, shag-crazy narcissist and became a “champagne socialist” revolutionary and began saying “look at what’s wrong here”…that‘s when he became a lightning bolt.

From Variety‘s Dennis Harvey: “Brand might look like a dissolute rock star, but take away the expletives and jokes and it’s clear that what he says is eagerly dismissed in some quarters precisely because he’s smart and provocative, and reaches a large audience with a message that is off-the-charts liberal by current standards. The reasons he gives for being fed up with the status quo are very persuasive — and delivered in such a way that they reach people who’d be bored stiff by any standard political sermonizing.” 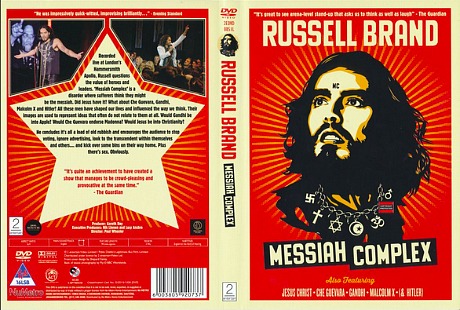 From The Guardian‘s Alex Needham: “It’s Brand’s journey from comic to activist which is the meat of Timoner’s story: what happens when drugs, sex, fame and wealth all fail to thrill and a charismatic man decides to make the almost unprecedented transition from comic to guru. Even if you’re cynical about Brand’s motives or just think that he’s a bit of berk, the film convinces you of the almost alarming sincerity of his political mission — not least because his mother reveals that as a child Brand claimed that he was indeed the second coming.”

Harvey again: “Such self-comparisons might seem odious on the surface, and indeed they are quite odious to those who’d prefer to dismiss Brand’s concerns because they hail from an English comedian, ex-drug addict and former Mr. Katy Perry. But Brand’s motormouth eloquence and sharp if often gleefully rude intelligence certainly qualify him as much to talk about corporate greed, economic equality, climate change and other pressing issues as many professional pundits whose often dubious legitimacy is seldom questioned.”

Three years ago I posted a wish piece about finding some way to post Live Skype video feeds of my sundry activities on Hollywood Elsewhere. The idea was that an HE/Skype icon on the side could be clicked on and transformed into an expanded video screen when a flashing red light indicates activity. The idea died when it became apparent that Skype protocols didn’t allow for this, but now it’s back and crackling with live Twitter video feeds being offered by Meerkat and down the road by the Twitter-aligned Periscope.

Yesterday Twitter “kneecapped” Meerkat by preventing the importing of a user’s Twitter follower lists (i.e., the social graph), but the potential feeding of live video to unlimited thousands by a single feeder is a firm reality. There surely must be some way to adapt Meerkat’s or Periscope’s skill sets to generate Hollywood Elsewhere video from my iPhone at the touch of a button and have it appear on the site. Live events happening at the Cannes Film Festival, say. Or during a sojourn in Rome or Paris or Prague or wherever.

The Hollywood Reporter‘s Scott Feinberg has posted an interview (and accompanying audio q & a) with ’50s teen heartthrob Tab Hunter, whose closeted-in-Hollywood tale is told in Jeffrey Schwarz‘s Tab Hunter Confidential, which is screening at South by Southwest (a.k.a., “South By”). Hunter, 83, has never sounded to me like a layered or complex fellow, but he seems happy, settled. He lived an amazing life, certainly during his mid-to-late ’50s heyday. The doc is basically a visual accompaniment to “Tab Hunter Confidential,” an ’06 tell-all written when Hunter heard about the then-imminent publishing of Robert Hofler‘s “The Man Who Invented Rock Hudson: The Pretty Boys and Dirty Deals of Henry Wilson.” Wilson was a gay Svengali who spotted, brought along and managed the biggest closeted hunks of the ’50s and early ’60s, including Hudson and Hunter. Wilson’s first move was always “butching” these guys up with studly-sounding screen names — i.e., Arthur Gelien/Tab Hunter, Roy Scherer/Rock Hudson, Robert Mosely/Guy Madison, Orison Whipple Hungerford Jr./Ty Hardin, etc. No Wilson client was actually given the name “Ben Dover.”