I haven’t seen Get Hard (Warner Bros., 3.27), the preparing-for-prison comedy starring Will Ferrell and Kevin Hart. Chances are I’ll find it over-the-top coarse and unfunny, but Drew McWeeny’s politically correct slapdown review, filed tonight from Austin, makes me want to bend over backwards to find something I can enjoy or praise about it. Remember how Mel Brooks has said over and over that Blazing Saddles could never be made today? Please share impressions of Drew’s Get Hard disapproval, and in so doing consider the possibility that a straight guy being fearful of being forced to be some bossman’s heifer for ten years in the joint is not necessarily the same thing as being homophobic.

“There is nothing [Get Hard] can imagine that is worse than gay sex,” McWeeny laments. “How in the year 2015, as we see over 30 states finally recognizing same-sex marriage, can we possibly justify this thing? How can anyone sit in the theater and just laugh and laugh and laugh as the movie repeatedly screams, ‘Oh my god, gay people are so gross!’

“This film is so relentless in how wrong it is that I eventually gave up. I just couldn’t bring myself to laugh at something that will reinforce hatred, that plays into this idea that gay sex is somehow inherently more disgusting than regular sex. When we talk about homophobia, that’s exactly what this is. Sorry, but as great as sex feels and as important as it is to every person’s happiness, stigmatizing anyone for enjoying themselves in a safe, consensual way seems morally offensive to me.

When I let my cat Zak outside in the morning, the first thing he does is hop onto the fence and raise his head slightly and just smell the world. He’s revelling in the sampling of each and every aroma swirling around, sniffing and sniffing again, everything he can taste. I was thinking this morning how delighted and fulfilled he seemed, and how maybe I should do a little more of this myself. Take a moment and sample as many scents as possible in my realm. A few minutes of olfactory meditation.

The problem with so much of Los Angeles today, of course, is that too much of it is covered in asphalt and steel and plastic and concrete shopping malls and massive apartment buildings, and it doesn’t smell like very much of anything. Talk to Robert Towne about how Los Angeles used to smell in the 1940s, or read his screenplay of The Two Jakes for some great descriptions of the fragrances that were fairly commonplace. Or talk to anyone who remembers what it smelled like from time to time in the ’70s (despite the town being covered in horrible smog back then) or the early ’80s.

I was reminded last weekend there are several kinds of laughter but really only two — the heartfelt but not over-the-top kind that you tend to hear from people of modest character or cultivation, and the excessive, low-class laughter from people whose lives are basically a series of frustrations followed by a series of emotional outbursts, and who don’t “laugh” as much as howl or shriek or cackle like jackals, and who don’t seem to know when to put a cap on it when the laughter is done.

If something is funny you laugh accordingly — honestly, softly, giddily, loudly, joyously. But if you have any class you let it go after a few seconds and don’t hang onto it like a four-year-old. You let the flow of emotional ecstasy cool down and settle into a natural horizon-line of serenity.

I was in the fruit section of the West Hollywood Pavillions last Saturday, and a woman near one of the checkout counters was laughing like a loon who’d lost all sense of control. 10, 15, 20, 30 seconds…she wouldn’t quit. She could be heard all over the store, in every section, every aisle. You could see basket-pushers stop and turn in her direction and make a slight face as if to say, “What’s wrong with that woman? Why doesn’t she turn it down a bit?”

The general rule, I’ve found, is that the louder and longer a person laughs in mixed company, the more repressed and fucked up their lives are. For loud, prolonged laughter is not about “funny” — it’s about emotional exorcism or a kind of primal scream release. It’s about people letting go of inner torment, really. The loon laughers are never aware of what’s really going on, of course. They think they’re just having a great old time.

A few minutes’ worth of Steve and Nancy Carell‘s Angie Tribeca, a lowbrow police spoof that Carell has called “really, really stupid,” was just screened at South by Southwest. Wildly unoriginal, of course, but nobody cares. It feels like a fairly close relation of Zucker-Abrahams-Zucker. Or a kind of gene splice between ZAZ material and Alan Spencer‘s Sledge Hammer!, which was a more tonally subdued, “either you get it or you don’t” thing with a vague political slant. The difference between homage and a flat-out copy was recently highlighted by the recent Thick & Pharell verdict, but everyone assumes this kind of humor belongs to the public domain.

“My idea of a cool and studly fast car movie is Drive. My idea of a complete waste of time is James Wan‘s Furious 7 (Universal, 4.3.15). I have the same amount of belief in the real-world versimilitude in this trailer as I do in a Road Runner cartoon. Sky-diving cars with special chutes that open and close at just the right time? Sure thing. The bit with the late Paul Walker running along the top of a bus teetering on a cliff isn’t bad conceptually, but Wan waits too long and expects us to believe that a guy could leap…what, 40 or 50 feet and fall into a car and not crack his ribs and elbows and forearms? If anyone had the courage and the character to make a real car movie (i.e., something that restores the aesthetic of the car chase in Bullitt or either of the Gone in 60 Seconds films) I would pay to see it repeatedly. The people who made Furious 7 are, no offense, corporate-fellating scum.” — from an 11.1.14 HE post titled “Obviously Fake CG Cretin Porn.” 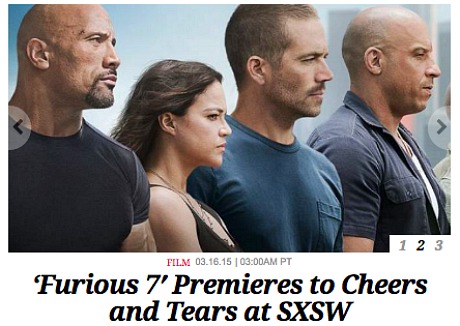 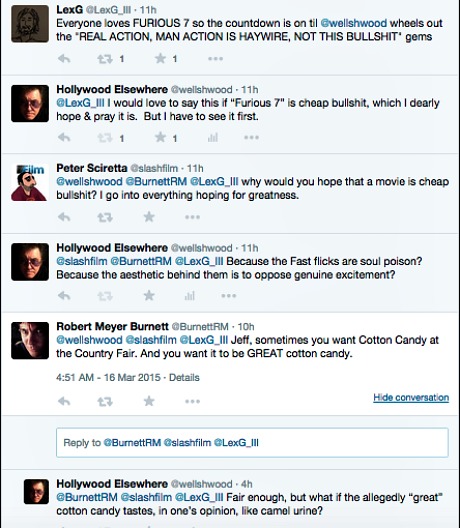 I’ll trust reviews of documentaries out of South by Southwest, but not reviews of name-brand, studio-generated comedies and action films. SXSW is, I feel, too genre-friendly, a little too self-regarding (we are the chosen hipsters amassed at Ground Zero!) and far too giddy an atmosphere. Something in me says “cuidado!” when I hear that a film has gone over big in Austin. I love watching a sharp film with a knowledgable, emotionally responsive crowd, but the SXSW crowds are too loving and laugh-ready. On top of which I don’t trust Variety‘s Justin Chang when it comes to comedies. Justin is a brilliant, first-rate critic but Spy-wise (which is to say Paul Feig or Melissa McCarthy-wise) I suspect he’s a little too gentle, kindly and obliging. In this regard Hollywood Reporter critic John DeFore (here’s his review) is also on the not-sure-I-can-trust-him list.

If you want to know if a comedy is truly special and on-target you need to hear from someone with a bit of a cranky attitude. If a comedy makes somebody with a vaguely sullen personality go all goofy, then you know it’s almost certainly a standout. In this light Indiewire‘s Drew Taylor seems somewhat trustworthy, which is to say possessed of a slightly contentious mindset, which is what I understand and relate to. A “show me and then I’ll laugh” “attitude. Not “whee-hee, I want to laugh going in! Just give me a little tickle and I’ll split my sides.”

5 Comments
The Law Was In No Hurry

The Jinx director Andrew Jarecki has visited CBS This Morning to discuss the big hoo-hah and particularly review the timeline of his interviews with real-estate heir and accused murderer Robert Durst. This is generating considerable interest given that Durst was arrested in New Orleans only last Saturday night, or less than 24 hours before the airing of the final Jinx episode, “The Second Interview,” during which an audio recording is heard of Durst muttering that he “killed them all” — a presumed reference to his late wife Kathie Durst, who disappeared in 1982, as well as Durst’s murdered friend Susan Berman, who was shot in December 2000, along with Galveston rooming-house resident Morris Black, who died in ’01 after an altercation with Durst.

This startling recording and other incriminating information (particularly the two envelopes with the word “Beverley” printed in highly similar block-letter handwriting, delivered in ’99 and ’00) was shared with Los Angeles law enforcement authorities “many months” ago, Jarecki said this morning. Jarecki’s first sit-down interview with Durst happened over a three-day period in 2010, he explained, and then a follow-up happened “a couple of years later” or sometime in 2012.

In a N.Y. Times interview posted today (3.16) Jarecki says his team discovered Durst’s bathroom audio confession on 6.12.14, or roughly 9 months ago. Is that what Jarecki means by “many” when he says he passed this evidence along? And yet L.A. officials decided that this obviously damning evidence wasn’t enough to motivate an arrest until last Saturday night? They weren’t inclined to arrest Durst nine months or six months or three weeks ago? Or next week or six months from now? They waited until a day before this fascinating HBO series reached its revealing, historic conclusion?