Support on Patreon Follow @wellshwood
46 Comments
Do It Again

Everybody watches it on HBO for seven years, James Cameron‘s Aquaman becomes a thing without actually becoming a thing, the characters develop their own arcs and psychologies and followings, fat Turtle becomes thin Turtle and it all shines on, man. And then it ends. And now, three and half years after the sign-off, we’re being asked to jump back in the pool again only in a different, tighter format, and shell out $14 or $15 bills a ticket and sit with animals in the theatre instead of watching it from the comfort of our couches. You know what this feels like? It feels like Doug Ellin and Mark Wahlberg and some HBO operators and the all-bro cast wanted to generate more cash-flow. Warner Bros. opens Entourage on 6.15.

“A dark river of fatalism courses beneath the beautifully photographed vistas of Slow West an intriguingly off-center Western that brings a bevy of European talent to bear on an American frontier story. John Maclean’s impeccably crafted writing-directing debut at times has a distinctly Coen-esque flavor in its mix of sly intelligence, bleak humor and unsettling violence, exuding fierce confidence even when these qualities don’t always cohere in the smoothest or most emotionally impactful fashion.” — from Justin Chang‘s 2.13.15 Variety review.

Almost two years after announcing a double mastectomy to prevent cancer from gaining a foothold, Angelina Jolie has announced in a 3.24 N.Y. Times op-ed piece that she’s undergone a second preventive surgery, the removal of her ovaries and fallopian tubes. In a manner of speaking we all have the Sword of Damocles above our heads, but Jolie’s attitude about her situation strikes me as exceptionally brave and open-hearted. “It is not possible to remove all risk, and the fact is I remain prone to cancer,” she writes. “I will look for natural ways to strengthen my immune system. I feel feminine, and grounded in the choices I am making for myself and my family. I know my children will never have to say, ‘Mom died of ovarian cancer.'”

I’m sorry but the idea of Bradley Cooper directing and co-writing the third big-studio remake of A Star Is Born with Beyonce in the lead is…well, pretty close to ghastly. Not to mention unwise on Cooper’s part. An untested director always wants his/her first film to be an under-the-radar indie, and then he/she can make a big studio-funded flick. If it happens the new Star Is Born will be commercial, of course, but is there anyone who isn’t sick to death of this grotesque showbiz yarn? (Nutshell: The career of a gifted but unknown singer-actress is nurtured and nudged along by her alcoholic superstar husband, and as she becomes more and more successful his career goes farther and farther down the drain.) This was never that great of a story. Nobody wants to hang with a guy with alcohol and drug-abuse issues, much less a suicidal one, and I’ve personally had a bitch of a time watching the three previous attempts — The 1937 Star is Born with Janet Gaynor and Fredric March, the 1954 widescreen version with Judy Garland and James Mason, and the 1976 version with Barbra Streisand and Kris Kristofferson. Please…not again.

Vin Diesel has told Variety‘s Ramin Setoodeh in a “lengthy” cover story that Furious 7 (Universal, 4.3) “will probably win Best Picture at the Oscars, unless the Oscars don’t want to be relevant ever.” After making this claim, Setoodeh writes, “Diesel took a breath before offering his prediction for a second time — ‘This will win Best Picture…there is nothing that will ever come close to the power of this thing.'”

So if you’re in a car that’s free-falling from a plane for a good 60 to 75 seconds from way up high and dropping at over 200 mph, all you need to do is pull a ripcord and a big parachute will open and the car’s descent will be stopped and it’ll float to the ground and drop you on a highway like an autumn leaf? How is this in the least bit transporting? What is Diesel trying to say here? What’s the joke? What drug do I need to take?

I do weights and stretching exercises daily and a couple of weekly power walks. I used to do the treadmill at 24 Hour Fitness but I grew to hate the monotony, and speed-marching around WeHo during lunch hour is unappealing due to a half-dozen factors, mostly the traffic noise and the godawful bleachy light and the moderately ugly architecture. If you’re going to walk around during daylight you have to do it in the affluent areas. And moonlight walks are best. Los Angeles will never hold a candle to the great walking cities of Europe (Paris, Prague, Rome, Munich) but something special happens after dark here. The hurlyburly feels absent or at least settled by way of the cool nighttime air and nectary aromas and general aura of moisture and quiet. 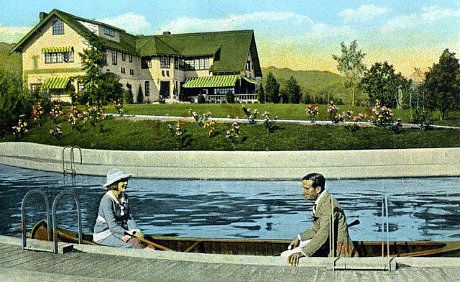 Mary Pickford and Douglas Fairbanks canoe-ing around a swimming pool (?) at Pickfair back in the mid 1920s.

Last night a friend and I did a 3 1/2 hour round trip across and through Beverly Hills, starting at WeHo Pavillions and then west on Carmelita and Elevado for 30 or 35 blocks through the flats, Doheny to North Linden (gazed at the old Bugsy Siegel mansion for the first time in my life), and then across Sunset and up Whittier Drive and Carolwood Drive, and then down Angelo Drive and past David Geffen’s home at 1801 Angelo (i.e., the ten-acre Jack L. Warner estate, built in 1937) and then across Benedict Canyon and up Summit Drive, past the former homes of David O. Selznick, Charlie Chaplin, Tony Curtis, Ronald Colman and the former location of Douglas Fairbanks and Mary Pickford‘s “Pickfair” (1143 Summit Drive), which was torn down in 1990 or thereabouts by the loathsome Pia Zadora and her husband Meshulam Riklis.

47 Comments
Academy Slackers Need To Shut Up, Sit Down

Sometime during tonight’s Academy board of governors meeting a small cabal of old-fart conservatives will reportedly push for a return to only five Best Picture nominees, and it’s possible, I’m hearing, that this change might be adopted. (Last Thursday Variety‘s Tim Gray reported that “a faction will propose a return to five best-picture contenders and will push for an immediate vote,” even though “the topic is not on the agenda.”) This would be a titanically stupid decision, of course, as fewer Best Picture nominees would obviously mean a less diverse, less inclusive Best Picture tally. Presumably a portion of the 51 governors have sniffed the air over the last five or six years and realized that the culture wants more people and styles and viewpoints participating in the conversation, not fewer. Something tells me that Academy members who want to go “back to five” have limited their sniffing to the air in their own living rooms and kitchens.

Yes, it would seem more prestigious for a Best Picture nominee to be one of five films rather than eight or ten, but going back to five holds zero appeal for the broader spectrum of filmmakers and viewers that the Academy needs to attract and appeal to. Politically correct social-agenda films like Selma would have a tougher time making the cut with only five slots, that’s for sure. Not to mention indie favorites like Whiplash, which persuaded cinematically sophisticated under-30s to watch the Oscar telecast, or at least more of this crowd than would have watched if Whiplash hadn’t been nominated.

You can’t just have slickly crafted, emotionally moving “ooh, wow” movies nominated for Best Picture. You also have to nominate (if possible) a little indie-ish movie. And a politically correct one that African-Americans or transgenders or gays or multi-amputees or recovered alcoholics or muscular-distrophy sufferers want nominated. And a broad-based, not necessarily liberal-minded film that Joe and Jane Popcorn relate to, like The Blind Side or American Sniper, etc. And possibly a one-in-a-million, odds-defying CG fantasy film. You can’t just have nominees along the lines of Birdman or Steve Jobs– or Brooklyn or The Theory of Everything.

Six years ago the Academy boosted the Best Picture nominee list to ten, and then it modified that with the preferential ballot system allowing for up to (but not necessarily totalling) ten Best Picture nominees. Going back to five nominees would appease only one group — i.e., the all-but-comatose Academy members those who find the notion of keeping track of all the films that deserve Best Picture consideration (which usually total 15 to 20) tiring or too hard. Trust me — the people who want to go back to five are not those who are “busy being born.”