Patrick Brice‘s The Overnight (The Orchard, 6.19), which I caught at last January’s Sundance Film Festival, isn’t exactly hah-hah “funny” but it’s definitely oddly amusing. A congenial suburban sex-kink comedy about an innocent 30something couple (Adam Scott, Taylor Schilling) being gently manipulated into sexual receptivity by a mellow predatory couple (Jason Schwartzman, Judith Godreche) looking for a little action, or more precisely to spice up their own love lives. It really does work for the most part, but I’d be remiss if I didn’t mention my most vivid recollections of this film, which are basically two scenes in which Schwartzman and Scott go full-frontal, and one of them is hung like a horse and the other like a cashew. Anyone who watches The Overnight and says these scenes didn’t make a big impression is a liar.

It was revealed during this morning’s Paramount show at Cinemacon that footage from Mission: Impossible — Rogue Nation of Tom Cruise hanging on to a Airbus A400M as it lifts almost a mile into the air is 100% real.  Variety‘s Brent Lang is reporting that Cruise performed the stunt eight times. That’s a very ballsy stunt and full respect to Cruise for manning up, but it almost doesn’t matter because nobody believes anything they see in a movie is real so who cares? If the shot had been CG’ed and green-screened the net effect would be identical. Because, as Werner Herzog famously said seven or eight years ago, “Nobody trusts their eyes any more.” 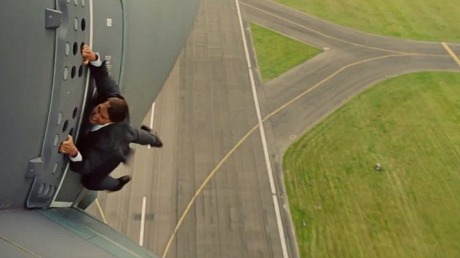 HE’s own Guillermo del Toro has been announced as one of the jury members for the 68th Cannes Film Festival. Led, guided, goaded or in some way orchestrated by Joel & Ethan Coen, the other jurors are actresses Rossy de Palma, Sophie Marceau and Sienna Miller, singer-songwriter-guitarist Rokia Traore (who?), director-actor Xavier Dolan and actor Jake Gyllenhaal. Last year’s foo-foo-minded jury (Jane Campion, Sofia Coppola, Willem Dafoe, Nicolas Winding Refn, Leila Hatami, Gael Garcia Bernal, Carole Bouquet, Jeon Do-yeon) decided on a worthy but somewhat contentious Palme d’Or winner in Nuri Bilge Ceylan‘s Winter Sleep. I’m somehow sensing that whatever the ’15 jury decides upon, there will be less of a “what the eff?” reaction? These guys seem a bit less eccentric, more “open to the currents,” etc.

Since the first teaser the common consensus has been that the FX in Brad Bird‘s Tomorrowland (Disney, 5.22) are state-of-the-art. This seems all the more clear now. And George Clooney‘s curmudgeonly hermit is, it appears, an action stud to some degree. The shot when they depart the current dimension for some realm beyond while lying in a bathtub reminded me, of course, of that Mamas and the Papas album jacket photo. Right?

I’ve been hearing about Jon Schnepp‘s labor-of-love doc about the Nic Cage Superman flick that never happened for…what, two or three years now? There’s been a couple of crowd-funding campaigns. In any event it’s finally completed, ready to roll and here’s hoping. Superman with ’80s rock-star hair. The Death of Superman Lives: What Happened? will actually open theatrically in “select” U.S. theaters on 5.1 followed by VOD, Bluray and DVD exposure in July. Schnepp looks so nerdy, and those shirts! — why does there have to be a two-shot of him sitting next to every interview subject? And why does he nod all the time? I’ve done this for years. You don’t have to nod. Just listen and ask good questions — that’s all it takes.