A few hours ago Deadline‘s Anthony D’Alessandro reported that Alex Garland‘s Ex Machina is an indie hit based on three indicators — (a) the $5.44 million earned this weekend by the sci-fi chiller is A24’s biggest ever, (b) “fans around the web” are calling it “Blade Runner meets The Social Network” and (c) an intrepid Deadline editor noticed that an 8:25 pm screening of Ex Machina at the ArcLight Sherman Oaks last night was “75% full.”

Has the HE community noticed any special currents out there? Attended any screenings that were 75% full or better? Details, quotes, particulars.

Ex Machina “is a chilly but never dull behavioral thing — techy, beautifully designed, fascinating and definitely creepy at times,” I wrote on 4.8. “It comes alive and gets under your skin (or it did mine, at least) because of a certain tone of casual, no-big-deal eccentricity.

“It’s not what anyone would call a comforting film, but director Alex Garland composes and delivers a certain low-key, spotless vibe that feels…well, ordered. There’s never a feeling of emotional chaos — everything happens with deliberacy. Call it a vibe of crisp efficiency with an underlying feeling of something malevolent around the corner.

Charlton Heston‘s performance as the devious Cardinal Richelieu in Richard Lester‘s The Three Musketeers (’73) was easily the best role he landed and the best performance he gave during the ’70s. The ’80s and ’90s were relatively fallow for him, but Heston lucked into a perversely amusing supporting role as Andie McDowell‘s dad in Peter Chelsom‘s Town & Country (’01) — the last discussable performance he gave. Heston’s last memorable appearance happened the following year in Michael Moore‘s Bowling for Columbine — an ambush, obviously, and not a performance.

As I didn’t ask for DVD screeners of the first episodes of Happyish, I’ll be seeing it tonight along with everyone else. But I’m surprised it’s tanking with critics — 28% positive on Rotten Tomatoes, a not-much-better 48% on Metacritic. I was half-convinced by the trailers that it would probably be a  moderately amusing serving of misanthropic bile. Not so apparently. “Happyish has its head stuck so far up its rear end and is so filled with personal rage and rotten people that just a small dose of the show should easily dissuade half its viewers from sticking around. The other half will perhaps sense a melody beneath all the foul-mouthed diatribes and self-absorbed whining.” — from 4.24 review by Washington Post TV critic Hank Stuever.

A Munich-based film journalist says he’s been told that no advance screenings of Mad Max: Fury Road will happen in his town, and that the big Cannes screening on the morning of Thursday, 5.14 (or the same day it begins showing in much of Europe and a day before the U.S. opening), will offer the first looksee for European critics. But Warner Bros. will begin screening Fury Road for New York journos starting this Wednesday (4.29). It will also screen in Manhattan on 5.6, 5.7 and finally at an all-media on Tuesday, 5.12. The review embargo lifts on 5.12 at 12:00 noon Pacific. 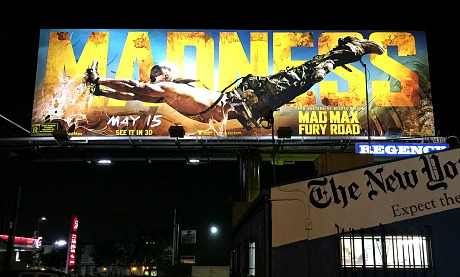 For a three-year period between The Sixth Sense and Signs (’99 to ’02), M. Night Shyamalan was almost the new Hitchcock. And then his rep took a hit with The Village (’04) and Lady In The Water (’06). Then he rebounded slightly with ’08’s The Happening (although the big topic of conversation back then was the scene in which Mark Wahlberg talked to plants). Then his career totally went off a cliff with The Last Airbender and especially in the wake of After Earth. Now with The Visit (Universal, 9.11), an apparently harmless little horror flick, he’s more or less become Wes Craven. I remember the being-compared-to-Hitchcock days. I remember his delicious, insightful commentary on the Strangers on a Train DVD/Bluray.

If there’s one thing that injects pure elation into my heart, it’s hearing that the latest bullshit superhero flick (like, for example, Avengers: Age of Ultron) has earned a record-breaking $201.2 million in 44 territories this weekend. And those 44 markets represent only 55% of the international territory, mind. Disney stockholders are going to be gorging on caviar and lighting cigars with $100 bills after the other 45% play the film. On top of which Ultron is expected to pull down $200 million or so when it opens domestically next Friday. Will there be spontaneous street parties held in celebration of this success? I’ll bring the firewood and the kerosene.

At last night’s White House Correspondents’ Association dinner, emcee Cecily Strong “created a moment” when she asked all members of the media in the ballroom to raise their hands and take a solemn vow: “I solemnly swear not to talk about Hillary’s appearance, because that is not journalism.” She is correct — serious journalism and offering comments or asides about a person’s appearance are separate realms of expression. Do average citizens vote for or against a candidate based on his/her appearance? Absolutely not. JFK‘s youth, matinee-idol looks, perennial tan and thick reddish-brown hair had no effect upon voter likes or dislikes. The fact that the 70something Ronald Reagan didn’t have white or graying hair or a sagging, withered face when he ran for president in ’80…nobody cared. They would have voted for him if he looked like Walter Brennan in Rio Bravo because they were voting for the man, not the appearance. Barack Obama‘s cappucino skin shade had nothing to do with his winning the ’08 and ’12 elections…zip. And Hillary Clinton’s grandma face and puffy eye-bags will have no effect on her popularity during the 2016 Presidential election. The election will be entirely about who she is or is not…about character, cojones and convictions.