At the invitation of Disney publicist Howard Green I had a nice chat with Ray Bradbury on the Disney lot in…now I can’t remember. It was either during a visit to Los Angeles in late ’81 or after I’d moved to L.A. in the spring of ’83. The motive was to promote Something Wicked This Way Comes, for which Bradbury had written the screenplay, adapting it from his same-titled 1962 novel. We talked about the film a bit but we mainly just freestyled all over the place. I remember feeling irritated by Bradbury’s insistence that writing was a total joy, and that anyone who didn’t feel that joy shouldn’t write. Well, writing had been murder for me since I started writing reviews and whatnot in the late ’70s. Every piece I wrote took it out of me big-time so I really didn’t like hearing how fucking wonderful it was to put words to paper. Bradbury was right, of course, but I only started to feel happy about writing about 15 years ago, maybe a bit more. Before that it was like digging ditches.

Almost a year ago The Hollywood Reporter‘s Megan Lehmann reviewed Josh Lawson‘s The Little Death (the English translation of “la petite mort,” a French euphemism for orgasm) somewhat favorably. The film is basically a collection of vignettes about odd sexual behavior between couples, but the only one that Lehmann found truly affecting happens “toward the end of the film’s fairly brisk running time. Newcomer Erin James plays Monica, a partially deaf switchboard operator at a video relay service who acts as a go-between connecting deaf-mute Sam (TJ Power) to a phone sex line. The two actors have fairytale chemistry, making this particular segment both hilarious and swooningly romantic.” It sounds worth the rental (or ticket price) for this alone. Magnolia opens it on 6.26. 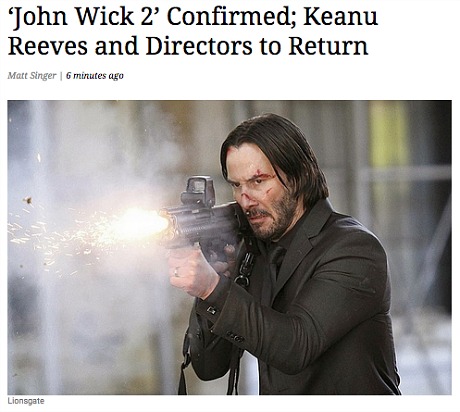 The very first time I’ve ever heard those familiar John Williams themes coming out of a wooden, 1930s-era radio. It’ll probably turn out to be the last time. The radio is located at Dun-Well Doughnuts on Montrose near Bushwick. The waitress behind the counter spoke with the usual mincing, sexy-baby, beep-uh-duh-beep-beep vocal fry. When she asked if I wanted soy or almond milk (as they have no dairy), it sounded like “deebeedeesoyahahmand?” Uhm…are you asking if I want regular or low-fat milk? “M’sayingweeyonlyhavesoyahmand.” Soy or…? “Soyahamand.” Which is the least problematic? “Soy.”

“These people, their lives…they’re in a galaxy far, far away…it’s a journey that people can relate to” — 23 year-old Daisy Ridley (i.e., Rey) offering a generic, somewhat worrisome thought about Star Wars 7: The Force Awakens in the Vanity Fair video piece. What I find worrisome is a sense of what Ridley may (I say “may”) be implying when she says “people.” Millenials and fanboys, I fear she means. A chill just went down my backbone. I sincerely hope my suspicions are neurotic rather than intuitive. I really want Awakens to work in a classical way. 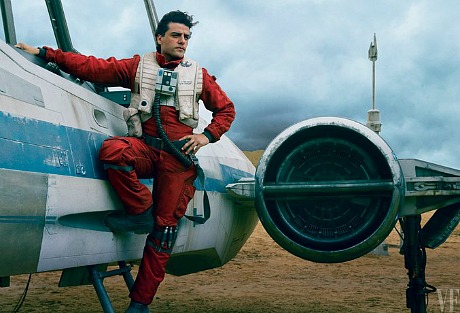 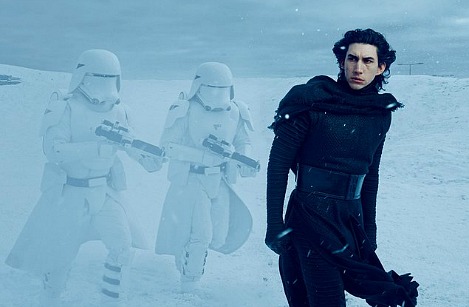 I shouldn’t have to remind anyone that that the converted, fluttery-voiced devotionals (i.e., the children of Harry Knowles) mean nothing — they’ll be there no matter what. This movie has to knock my demanding, somewhat grumpy socks off…that’s what’ll count at the end of the day. I will be one of the first canaries to go down into the Force Awakens coal mine, and if I die, the movie dies with me in a sense.

About five months ago the Stars Wars 7: The Force Awakens actor/characters were identified via Topp-style trading cards provided to Entertainment Weekly by J.J. Abrams and Co., and one of them was Adam Driver as Kylo Ren, which I described as “the black-cloaked bad guy in the snow-covered forest with the light saber“…duhh. In yesterday’s ign.com piece about the Annie Leibovitz Vanity Fair photo shoot on the set of the film, Lucy O’Brien somewhat breathlessly notes that the video essay [below] suggests that (a) Driver “is indeed playing antagonist Kylo Ren” and (b) “very little is known about his character beyond the lightsaber he carries and his attire, as spotted in the Force Awakens‘ first teaser trailer.” HE to O’Brien: How much do you need to know at this stage? When you see a tall, big-shouldered guy with severe features dressed in black, what does that suggest to you? Abrams quote from VF piece: “I have a thought about putting Jar Jar Binks’ bones in the desert there. I’m serious! Only three people will notice, but they’ll love it.” 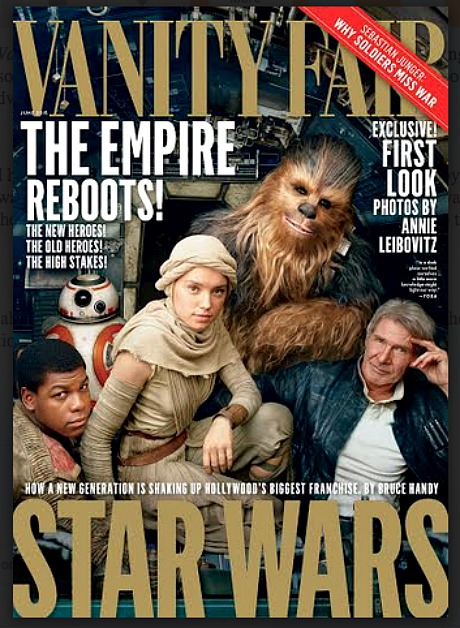