It hit me yesterday as I was walking down Eighth Avenue in the 20s that during rush hour Manhattan is a kind of huge sprawling block party — a great communal happening with people talking and sharing about everything in twos, threes and groups on every block, everywhere you turn.  It’s a special current, and even if you’re alone you can’t help but feed off the energy, which hits you in successive waves. Then again I’m probably more receptive to this because of my out-of-town perspective. I think I like coming in for short visits more than living here. On top of which I really hate the weather here in July, August and half of September. I’m not entirely in synch with Werner Herzog’s views about Los Angeles but I’ve come to like it a bit more in recent years. If I had unlimited funds I’d live 25% of my life in L.A., 25% in New York, 25% in Italy and 25% in Belize. Or something like that. Actually, make that 33% in the first three and confine Belize to just three or four weeks. 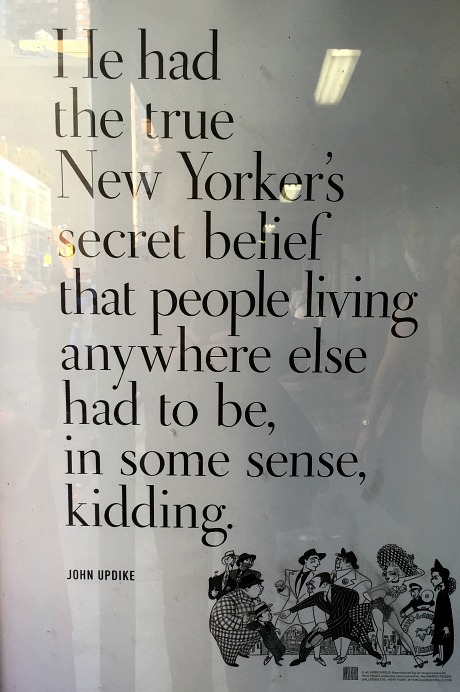 “Terrence Malick is an enigmatic filmmaker. He’s a brilliant photographer. He’s a brilliant cinematographer. In a way, though, he doesn’t know how to coalesce a story from beginning to end. When I first saw [The New World] it was an early edit. There was no reason this movie couldn’t have been as successful as Titanic. It was cut that way. It was a story of this Native American girl meeting this guy and it was really romantic.

“[But in the] editing, Terry, as he does in his filmmaking, made much more of a dreamworld and he disassociated the scenes. There was no through-line any more. He lost the love story. He wasn’t interested in that. He started telling a story about images and it didn’t hold together. The movie didn’t hold together for me, or for an audience.

Even by the hokey, intentionally vulgar standards of ’50s movie posters this is a howler for two reasons. One, Victor Mature‘s Samson wasn’t loaned out by Cecil B. DeMille to perform a cameo in which he brings down the temple by pushing the pillars apart. And two, the copy is beyond purple and out of control. The “buried alive” thing is a finale spoiler even if it’s mostly inaccurate. British Pharoah Jack Hawkins‘ “wives” aren’t buried alive at the end (just one wife), and the court and slaves aren’t forced to accept this fate due to Hawkins’ cruelty, etc. And Joan Collins doesn’t cause anyone’s blood to be spilt except for Sidney Chaplin‘s (with whom she was having an affair when the film was being shot in Rome), much less enough blood to anoint hundreds of pyramid stones. 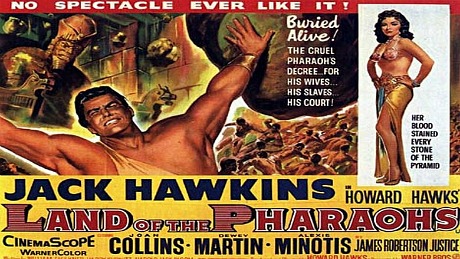 12 Comments
Well After The Fact

I’ve got a conflict between tomorrow night’s all-media screening of Anne Fletcher‘s Hot Pursuit (Warner Bros., 5.8) and an 8 pm performance of The Curious Incident of the Dog in the Night-Time tomorrow night. The play wins, of course, but that means not seeing the film until late May because (a) I leave Thursday night for Paris, (b) for some reason the film isn’t opening in France until September 9th (“openings of American comedies tend to lag by months [here],” says a Paris-based critic friend) and (c) it won’t open in Prague until May 28th. 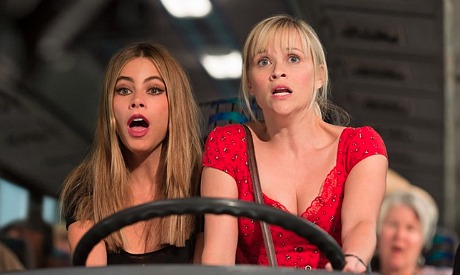 Here, in any event, is a portion of one of the first reviews, posted yesterday by Westword‘s Stephanie Zacharek: “The flagrant silliness of Hot Pursuit is a plus, not a liability. Directed by Anne Fletcher, [it’s] a quiet triumph of tone and timing. Nearly every scene is cut at just the right point, often topped off with a fantastic kicker of dialogue. While self-deprecation is integral to humor, self-humiliation is a trickier, more delicate business, particularly when it comes to comic roles for women. Thankfully, Hot Pursuit — with its script by David Feeney and John Quaintance, both of whom have thus far been writing mostly for TV — avoids gags of the ‘Darn! I broke my heel!’ variety.”

There’s been no chatter about my response to Julie Miller’s Vanity Fair conversation with Amy Schumer (posted on 5.4), which included a reference to myself and last February’s Schumergate episode. I’m naturally anticipating more Twitter hate so even though this is a dead-horse issue for regular readers, I’m posting one final clarifying retort. As I noted a few weeks ago, there’s almost no point in responding to these things. The legend or the meme about what I allegedly wrote but did not in fact write has totally taken over. Nobody wants to read or re-examine anything.

At one point during Miller’s chat with Schumer about the “male gaze” factor, Schumer says, “Like the only person who has ever written anything saying that I am not pretty or attractive enough to be on camera was that one guy, Jeff Wells. I did not read [the post], but of course my best friends are like, ‘It was so fucked up!’”

Well, I didn’t say Schumer wasn’t “pretty or attractive enough to be on camera,” which of course mirrors the premise of her 12 Angry Men parody on her Comedy Central show. I wrote that in the context of the first Trainwreck trailer, in which her character was depicted as being the absolute belle of the ball who’s being hit on constantly with this and that guy almost fighting for her attention, she didn’t seem quite as hot as all that. I still think this. Schumer is attractive enough and a spirited barrel of laughs and so on, but in my mind she’s in the realm of 7.5 or 8. Is that really such a terrible thing to think or say?

I thought reactions to Mad Max: Fury Road were embargoed until next Tuesday. When I asked last night about a rave tweet from York University’s Rob Trench, he said “no embargo, at least at the Toronto screening I was at tonight.” He meant, I presume, that no embargo was announced at last night’s screening. The use of the word “masterpiece” is tempered, of course, by the fact that Trench is fairly young, but still…

Yesterday the first image from Martin Scorsese‘s Silence, which recently wrapped and will presumably open at year’s end via Paramount, was posted by Entertainment Weekly. The film is based on Shūsaku Endō‘s 1966 novel, which is set in 17th Century Japan and concerns the religious persecution of a Jesuit missionary (Andrew Garfield). Pic costars Liam Neeson, Adam Driver, Tadanobu Asano and Ciaran Hinds. Per usual custom pic has presumably been assembled as Scorsese has shot over the last few months. He now has the entire summer and early fall to fine-tune, CG-finesse, lay on the score and whatnot. It shouldn’t be a huge deal to have it ready by October or November. 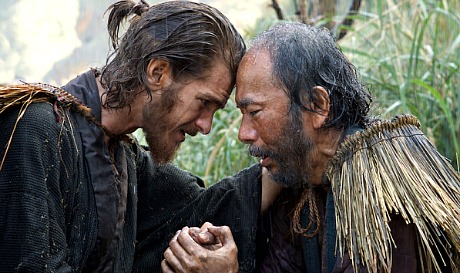 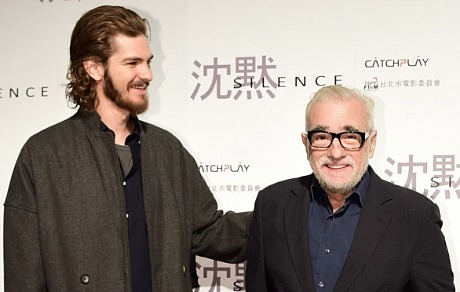 Andrew Garfield, Martin Scorsese during Taiwan press conference to announce end of filming of Silence. Note: The scraggly beard-growth thing doesn’t work when you’re Scorsese’s age — you have to either be clean-shaven or do a full smoothie beard.
May 5, 2015 8:55 amby Jeffrey Wells