I’ve never been all that nuts about Jules Dassin‘s Night and the City (’50), although it’s certainly a sturdy, highly respectable noir with a great Richard Widmark performance as the born-to-lose Harry Fabian. But Owen Smith‘s jacket cover for the forthcoming Criterion Bluray/DVD (8.4) has totally won me over. Smith’s painting style looks like something from a pulp ’40s novel about boxing, or is perhaps meant to recall George Bellows‘ “Stag at Sharkey’s,” a legendary 1909 painting of boxers slamming it hard. (Smith and Bellows’ painting styles aren’t “alike” but are similar enough.) I seem to recall Bellows’ painting being used in some way to promote Mark Robson‘s The Harder They Fall (’56), but I can’t find any online evidence of that. 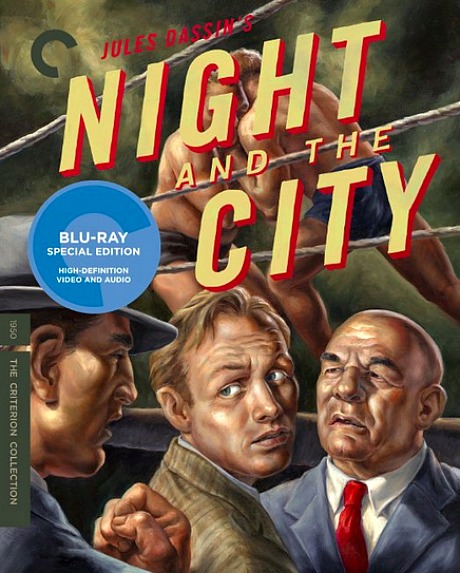 Good on Wes Anderson and Noah Baumbach for urging everyone to contribute to the Indiegogo campaign to finish the editing of Orson Welles‘ The Other Side of the Wind. I mentioned a couple of days ago that the campaign isn’t doing too well as we speak, and one reason, I suspect, is that people who ought to be throwing in some money haven’t done so. Not just directors and producers but journos on my level. While alive Welles never had any trouble taking meetings or eliciting lip service, but he always had trouble raising money for film projects — and the exact same pattern persists today. I was surprised when a film critic friend told me the other night that he has doubts as to whether the film that Welles had in mind can be reconstituted. There are also private concerns that the $2 million that producer Filip Jan Rymsza is looking to raise may be somewhat inflated, or, put more positively, that estimated editing costs could be significantly reduced with certain belt-tightening measures.

In my 5.21 post about the just-concluded 68th Cannes Film Festival being one of the weakest in recent memory, I forgot to menton or more precisely re-mention my immense satisfaction with (a) Kent Jones‘ Hitchcock/Truffaut, which press-screened twice during the festival but which I’d seen in Paris on Monday, 5.11, and reviewed the next day; (b) Steve McQueen: The Man & Le Mans, which I was very pleasantly surprised by when I caught a Salle Bunuel showing about halfway through the festival; and (c) Pablo Larrain‘s The Club, which I respected thematically and admired from a craft perspective but didn’t much care for otherwise — too grim and gray and claustrophobic. The big awards ceremony happens tomorrow night — Sunday, 5.24. Like I’ve been saying all along, it’s gotta be Son of Saul and Carol in this or that respect (probably Cate Blanchett‘s performance, or better yet hers and Rooney Mara‘s together) and I don’t know who or what else.

Saturday morning began with an 8:30 am screening of Justin Kurzel‘s passable but mostly underwhelming Macbeth, a gritty, gunky, Game of Thrones-like adaptation of William Shakespeare‘s classic tragedy with Michael Fassbender as the Thane of Cawdor and Marion Cotillard as the original scheming, ambitious, high-maintenance wife who causes all the grief. (Review in an hour or two.) I tapped out some thoughts but had to catch a 12:30 pm Nice Airport bus, and then the wifi sucked at the airport and the flight left at 3:15 pm. Touched down, arrived at Prague Airb&b pad just before 6 pm. Got some groceries, unloaded, shot a video tour, made the mistake of lying down, woke up three hours later. 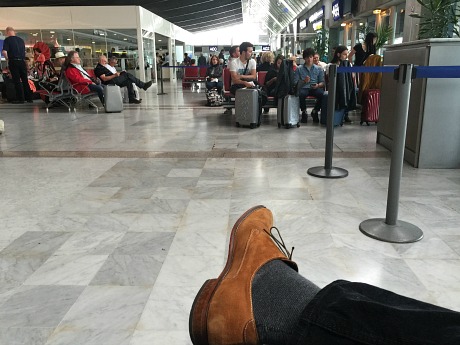