If you’ve read one or two books about the malignant visions of Charles Manson and the murders he caused in the late summer of ’69, this podcast by essayist and author Karina Longworth doesn’t deliver anything new, but she re-tells the saga in such a way that the bizarre particulars of those days seem as vivid and striking as recent news. Not just the activities of the Manson Family but the whole late ’60s youthquake zeitgeist (particularly from the perspective of the film industry), the effect of hallucinogens upon people who were too dumb or deranged to derive any profound spiritual benefit, the us-vs.-them mentality that had begun to manifest three or four years earlier. This is Episode #44 of Longworth’s You Must Remember This series. The title is “Charles Manson’s Hollywood, Part 1: What We Talk About When We Talk About The Manson Murders.” It runs an all-too-brief 35 minutes. 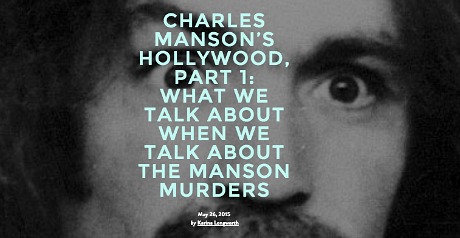 From Vashi Nedomansky’s explanation of a short about Mad Max: Fury Road, George Miller and John Seale‘s crosshairs cinematography and the editing of Margaret Sixel: “The most popular editing tendency for action scenes and films over the last ten years has been the ‘Chaos Cinema’ approach — a barrage of non-congruent and seemingly random shots that overwhelm the viewer with a false sense of kinetic energy and power. It follows, by contrast, that one of the many reasons Mad Max: Fury Road works as an action film is the almost soothing shooting and editing style. By using ‘eye trace‘ and ‘crosshair framing‘ techniques during the shooting, Sixel could keep the important visual information vital in the center of the frame. Because almost every shot was center-framed, comprehending the action requires no hunting of each new shot for the point of interest. The viewer doesn’t need three or four frames to figure out where to look. It’s like watching an old hand-drawn flip book whiz by. The focus is always in the same spot.”