A Deadly Adoption, a Lifetime movie costarring Will Ferrell, Kristin Wiig and Jessica Lowndes, is some kind of comedic put-on deal. Directed by Rachel Lee Goldenberg and written by Andrew Steele, pic will air on 6.20. Story deals with an affluent couple (Ferrell, Wiig) housing and caring for a pregnant woman (Lowndes) with the hopes of adopting her unborn child. On 4.1 The Hollywood Reporter‘s Lesley Goldberg described the two-hour TV flick as “campy and fun and a contemporary wink at the [Lifetime] genre.” From the Wiki page: A day after the project was reported about on 4.1.15 Ferrell issued a statement saying that “we are deeply disappointed that our planned top-secret project was made public” and “therefore Kristen and I have decided it is in the best interest for everyone to forgo the project entirely, and we thank Lifetime and all the people who were ready to help us make this film.” Obviously bullshit. I don’t know what it is but it’s definitely airing.

It happened in the Boston area in the ’70s. A guy I was friendly with (not a friend-friend but we hung with the same group and partied together) had gotten married to a fetching but slightly older woman less than a year earlier, and their betrothal seemed to some like a curious, perhaps unwise union. It wasn’t long before things began to go south, mainly due to his immaturity. He would bop around and get high with his friends (i.e., me and the guys) while she mostly stayed home, or so I understood. I’ll be honest — I felt badly about their marriage being shaky only months after the ceremony, but I also saw an opportunity. I was a dog back then…sorry.

So I visited her one day under the pretext that I was looking for her husband. I wound up hanging out in her kitchen and sipping coffee and her serving me an omelette or a sandwich or something. Then I called and suggested a dinner or a movie or a visit to a bar (I forget which) and we did that a day or two later, me asking about the marriage and her saying “well, it’s not going very well.” The third visit is when I made a very gentle move and she reciprocated, etc. It was actually pretty intense. A lot of pent-up energy on her part.

I was reading Kyle Smith‘s N.Y. Post piece about how most women are constitutionally incapable of understanding Goodfellas (except for Thelma Schoonmaker, he meant to say) and how it’s basically made for guys and so on. True, the basic attitude and personality of Goodfellas is guy-centric but it’s really goombah-centric. On top of which the piece reminded me about how I, Jeffrey Wells, would have trouble fitting into that realm in real life. During that famous Joe Pesci “how am I funny?” scene, I wouldn’t just keep repeating “you’re just funny, the way you tell the story and everything” like Ray Liotta does. I would look Pesci in the eye and say, “No, Tommy, you’re not a clown — you’re a kind of artist. Telling a story the right way is an art. Take the basic facts of any story and there are probably 35 or maybe 50 ways to tell it in a way that nobody will laugh at. It’s a gift to know how to tell it just so. Ask Billy Wilder or Henny Youngman or any guy who knows how to connect with an audience.  You have to pick and choose the right way. Timing, tone, attitude, emphasis…it’s no different than the way Frank Sinatra sings a Cole Porter song or a really gifted pianist plays Peter Tchaikovsky.” I realize, of course, that saying something like this to Pesci would get me shot on the spot but that’s how I think and talk. I’m not one of those guinea greaseball types with the .38 snub nose and the patent leather shoes and starched white shirts with the pointy collars. And I come from New Jersey, mind.

“Jurassic World opens on a promising, unexpected note. Decades after the dream of billionaire John Hammond to open a dinosaur theme park was dashed by some uncooperative velociraptors and a grumpy T. Rex in Steven Spielberg’s Jurassic Park, the vision has come to fruition. Dinoland has been open for business for several years now in Costa Rica, but attendance has started to wane, because once you’ve seen one triceratops, you’ve seen them all. New attractions are needed to keep the tourists coming. These days, wonder has a short shelf life.

“So when Claire (Bryce Dallas Howard), the workaholic park manager obsessed with profit margins, announces to her staff at the start of the film that ‘No one’s impressed by a dinosaur anymore. They need to be bigger, louder and with more teeth!’ you wonder if director Colin Trevorrow has dared to pull a Charlie Kaufman. Will Jurassic World be a meta-movie that doubles as a commentary on Hollywood’s obsession to keep making sequels bigger, louder and with more teeth?”

I guess I missed the announcement that Stephen Frears Icon, a drama about the unmasking of Lance Armstrong‘s doping, has been renamed The Program — obviously a less intriguing title. The Program sounds dull, a synonym for a regimen or formula…something tough and demanding that an athlete does every day to keep fit. The movie, which looks like it might be quite good, will suffer commercially for this. Ben Foster as Armstrong and Chris O’Dowd as journalist David Walsh, whose book, “Seven Deadly Sins: My Pursuit of Lance Armstrong,” is the basis of John Hodge‘s screenplay. Walsh is obviously the voice of conscience here. Pic began filming in October 2013. Here it is 18 months later and still no U.S. distributor or release date. What’s the problem? This appears to have the making of a derby movie. Costarring Lee Pace, Jesse Plemons, Guillaume Canet, Dustin Hoffman and Bryan Greenberg.

The Cinephilia & Beyond guy tweeted that he was “devastated” by the passing of the legendary, forever elegant Christopher Lee at age 93. Why so devastated? Lee lived a long and healthy life as a man and a truly glorious one as an actor, despite having been more or less confined to the horror-fantasy genre by the indelible impressions he made in various Hammer horror films of the ’50s, most famously as Count Alucard…I’m sorry, I meant to say Dracula. I’ll always worship Cushing’s performance in the ’58 Horror of Dracula (or simply Dracula in England) but Lee was proudest, I suspect, of his non-fantasy performances — Lord Summerisle in The Wicker Man, the Comte de Rochefort in The Three Musketeers (the clip below between Lee and Charlton Heston offers a taste of what I feel is Lee’s finest, best-written screen performance), Scaramanga in The Man With The Golden Gun, and one of the guys on the cover of Band on the Run, the Paul McCartney/Wings album. Lee was the very epitome of the classy, elegant gentleman-actor who lived a much richer life than was indicated by the type of roles he mostly played. May we all live so long and reap so abundantly. 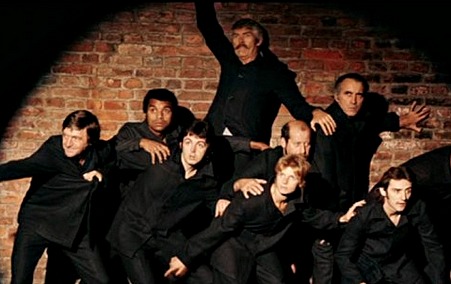 Notice how the great Christopher Lee is the ONLY GUY in this album-jacket photo who seems to be in character as a thief or ne’er-do-well of some kind. McCartney looks like an eight year-old who’s just been caught stealing a cookie. James Coburn…what the fuck is he doing? “I am a thief and proud of it, coppers! Come and get me!”
(More…)
June 11, 2015 9:57 amby Jeffrey Wells