The 25th anniversary of Warren Beatty‘s Dick Tracy is upon us, the commercially underwhelming Disney release having opened on 6.15.90. Tracy is one of the very few features based on a comic-book character that I genuinely admire, not so much for the story but for the glorious visual concept — Vittorio Storaro‘s cinematography, the partly animated, partly organic comic-book production design, the grotesque but groundbreaking makeup plus the delightfully over-the-top performances (particularly Al Pacino‘s as Big Boy Caprice and Dustin Hoffman as Mumbles). Plus it’s an absolute delight to re-savor on Bluray so I’m not understanding a claim by The Hollywood Reporter‘s Graeme McMillan that it seems today like “a movie that never happened.” McMillan believes that Disney’s actual lost comic classic is 1991’s The Rocketeer, but concludes nonetheless that Dick Tracy “deserves to be remembered more fondly (or just remembered, period) more than it currently is.”

Anyone with even a passing interest in the background, writing style and general psychopathology of HE’s own LexG needs to read this punchy, scathingly honest recollection of his first few months in Los Angeles in ’95 and early ’96. Who assumes their crackling brilliance will be such that the world will drop to its knees after getting a taste? Who drives to Los Angeles without a practical game plan? Life is a vale of troubles so you have to be shrewd and canny and hard like a butter knife.

Here’s hoping that the forthcoming Bluray of David Weisbart and Gordon Douglas‘s giant-ant movie, Them! (’54), will be presented in a boxy (i.e., 1.33:1) aspect ratio. I don’t know if work on the Bluray has been completed or if the guys in charge are 1.85 aspect-ratio fascists, but please. Remember the bravery of Kino Lorber’s Frank Tarzi when he released Delbert Mann‘s Marty in 1.33:1 instead of the Furmanek-recommended 1.85:1. Remember how 1.85 fascism was pretty much discredited when Criterion decided to release On The Waterfront in three separate aspect ratios — 1.33, 1.66 and 1.85. And check out the YouTube scene below and imagine how it will look (i.e., all the information that will be lost) if Them! is presented in 1.85. It’ll be nothing less than criminal if that happens. 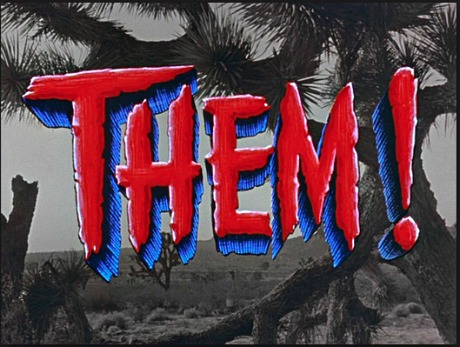 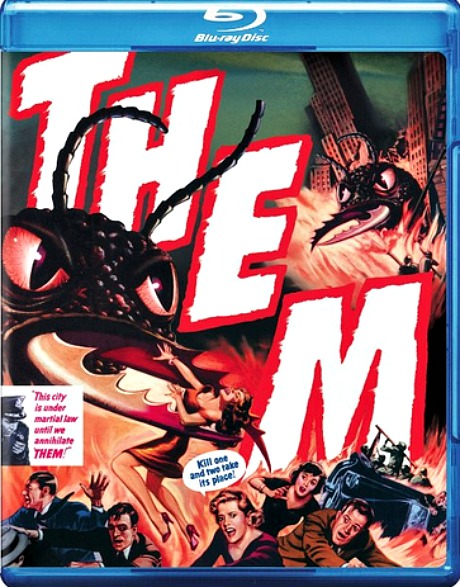 I didn’t mind Ron Underwood‘s Mighty Joe Young — I mainly shrugged when I saw it for the first and last time 16 and a half years ago — but I’ve never given a second’s thought to seeing it again. Sorry. But my pulse did quicken slightly when I saw that the 1949 version with Terry Moore, Ben Johnson and Robert Armstrong will pop on Bluray five months hence. It’ll include the original orange-tinted fire sequence. If I’d been in Los Angeles in ’49 and had a respectable resume and a little dough to throw around, I would have “tried” for Moore. I realize that I wouldn’t have stood a chance against Howard Hughes but do salmon deliberate whether or not they’ll make it upstream? If you want something, you go for it. Besides Hughes was a hound and Moore surely knew that. 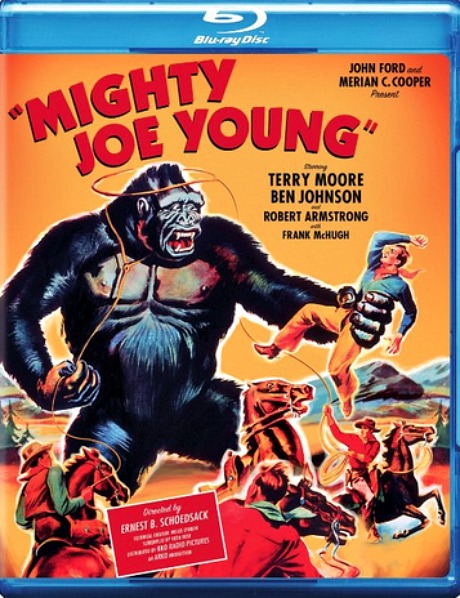 In a short but brilliant essay about the undercurrents in Alfred Hitchcock‘s Notorious, Senses of Cinema‘s Lauren Carroll Harris writes that “it is far too easy to watch a film and extract its moral themes through the lens of your own ideological framework.” One and a half seconds after reading this I said to myself, “Hey, that’s what HE readers have have accused me of doing from time to time.” But not consistently, I would argue. There are many films that I’ve liked or worshipped that I don’t agree with ideologically. (Including Triumph of the Will, Rio Bravo, The Informer, Yankee Doodle Dandy, Patton, A Man For All Seasons.) The bottom line is that we all respond best to films that affirm our basic understandings of the way the world is and how it most often works. And anybody who claims they don’t generally do this is a bald-faced liar.

Which is why I responded so strongly 35 years ago to Ordinary People (I know the lonely teenaged suburban malaise territory all too well) and 25 years ago to Goodfellas and eight years ago to No Country For Old Men and five years ago to The Social Network. They affirmed and agreed with what I know to be true about certain aspects — some local, some national — of the American culture, which I grew up with and know like the back of my hand.

Posted ten years ago with new lead paragraph: “Non-truths flood our communal atmosphere, not because we’re compulsive liars but because of our disrespect for various parties. Nobody’s 100% honest with their bosses or supervisors; ditto their wives or girlfriends. Familiarity breeds contempt, and with that a willingness to dispense occasional evasions and half-truths. Very few parents are 100% honest with their tweener and teenaged kids. Almost no drivers are honest with traffic cops. If I truly respect and fully trust you, I’ll be as honest as the day is long. But we live in a universe full of short days.

“This goes double or triple from a celebrity’s perspective. Pretty much every famous person lies through his or her teeth when it comes to public statements. Not blatantly but in a mild, sideways fashion. But that’s okay because they’re well motivated. They’re lying because they despise the gossip-driven media and feel that dealing with a corrupt and disreputable entity means all bets are off.

“And I think I understand the ethical system they’re embracing because it was explained in a couple of respected ’60s westerns.

“Sam Peckinpah’s The Wild Bunch is one of them. I’m thinking of a scene in which William Holden’s Pike Bishop expresses moral support for Robert Ryan’s Deke Thornton because he gave his ‘word’ to a bunch of ‘damned railroad men,’ and Ernest Borgnine’s Dutch Engstrom defiantly argues, ‘That ain’t what counts! It’s who you give it to.’

45 Comments
Said The Right Things But In A Familiar, Rote Way…Lacking Adrenaline Factor

Last night I listened to Hillary Clinton’s “four fights” speech — her first yeah-yeah, a “launch,” no more “listening,” beat the drum. Highly substantive, detailed (I love the goal of bringing U.S. broadband speeds up to the levels of Spain, Finland, Denmark and South Korea) and yet curiously non-invigorating. She reportedly wrote the speech herself and gave it hell delivery-wise, but she never left the ground. The musical-levitational gifts that Bill Clinton and Barack Obama are able to harness and finesse in front of a lecturn will always exceed her grasp. And that badgering ex-wife/schoolmarm voice…yeesh. But I believe that she believes. I believe in her feistiness and determination to push for what she feels is right. For all her needling or dislikable qualities, she’ll be much, much better for the country as a whole than Scott Walker or Jeb Bush or Marco Rubio…please. I’ll never be in love with Hillary, but I can live with her. Money line: “I may not be the youngest candidate in this race, but I will be the youngest woman president in the history of the United States.”