By now even California viewers of episode #3 of True Detective know that Colin Farrell‘s Detective Velcoro isn’t dead. Despite being shot twice with a shotgun at the end of episode #2 — the second time at very close range, right in the gut — by a guy wearing a birdhead mask. In fact, Velcoro’s not just alive but not even recuperating in a hospital. He’s walking around with a few marks on his stomach and chest and feeling more or less fine. That’s because birdhead guy shotgunned Velcoro with pellets made of a very soft material, like rubber or granulated cork or cat litter, because he didn’t want to really kill him. What would be the point of shooting a guy twice in order to not kill him? Beats me. If anyone can make heads or tails of this, please advise. 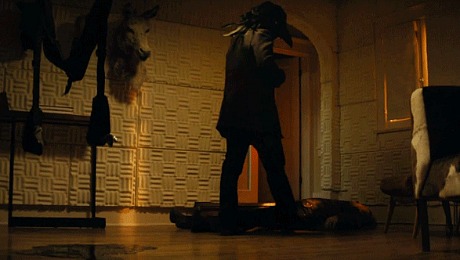 One of the defining moments of my early childhood — my life, really — happened when I wasn’t quite three years old, or sometime in the late summer. My mother and I were roaming up and down the Asbury Park boardwalk in the early evening, and one of the highlights (in my mind at least) was the merry-go-round. We gradually made our way south about two miles, give or take. Then I somehow slipped my mother’s grasp and disappeared. Gone. She freaked, of course. She found a couple of cops and asked for their help. They looked, searched, asked all the merchants…no luck. They finally made their way back to the merry-go-round and there I was — staring, bedazzled.

The incident put the fear of God into my parents. From then on they decided I had to be kept on a short leash and monitored very carefully. The result is that I began to feel that my life was being lived in a gulag. Rules, repression, “no”, time to go to bed at dusk, “because I said so,” “you’re too young,” etc.

In a 6.25 comment thread for a piece about Rose McGowan’s tussle with Innovative Artists, George Prager ungraciously posted some personal information about LexG. He deleted it soon after but Lex freaked, closed his Twitter account and hasn’t been heard from since. This morning I wrote “Prager” (his actual name is even more Irish) and suggested that he apologize to Lex and pledge to never again “out” his info. He said he “feels badly” about LexG’s disappearance and would definitely write and apologize. He said he was bombed when he mis-posted but was “tired of his bullshit…I felt like he needed an intervention of some kind, but it was wrong of me to do it.” I passed this along to Lex and repeated what I told him on 9.25, which is that he crumbles too easily and that it wasn’t that big of a deal and that he should just shrug it off. He replied that (a) he’s “not sitting around fuming about any one person or dwelling on any one thing” but that (b) he’s just “found the internet in general to be unpleasant and not helpful to my happiness for quite some time…just enjoying some time away from it.” He indicated a willingness to return to the conversation before long.

The original “Hot Hot Hot”, recorded by the late Montserrat musician Arrow (aka Alphonsus Celestine Edmund Cassell), popped in ’82 but it became a bigger hit in ’87 with a version by Buster Poindexter, aka soloist and former New York Dolls lead singer David Johansen. I listened to “Hot” this morning for the first time in ages — a pleasure. Poindexter/Johansen once told NPR’s “Fresh Air” that “Hot Hot Hot” was “the bane of my existence” due to its pervasive popularity. The David Johansen Group played at that 1977 Save The Whales concert that I co-produced with former g.f. Sophie Cabot Black. I remember chatting with Johansen at a bar about the booking and liking him — jazzy, good humored. The big DJG songs of the moment were “Not That Much,” which I also hadn’t listened to in ages until this morning, and “Funky But Chic.”

I’ve been a small businesman for almost 11 years now, as Hollywood Elsewhere became a stand-alone, self-run site in August 2004. This meant, of course, no more salary paychecks but checks for HE advertising runs. Which has meant, of course, that some people would occasionally pay late and that I’d eventually have to send them emails that said “ahem!…we’re a little late here!” If I don’t do that they’ll just pay even later or possibly stiff me the next time. I’ve always had this little voice telling me to not only use the voice of Mickey Mouse (“Hello!…hah-hah-hah!…hi!”) but adopt a Mickey Mouse-like attitude when I write advertisers. Or maybe I really mean Minnie Mouse…I’m not sure. Just imagine my Mickey Mouse voice saying “Will you please me? I’m just a mouse with a smiling face and big ears and a little black tail, but I’d very happy if you did the right thing…hah-hah-hah!” 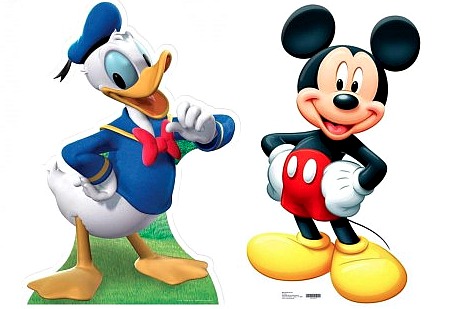 There’s this one advertiser who should have paid by last March or thereabouts, and now we’re past Independence Day. Hello, August! My ad guy and I have been Mickey Mouse-ing it, as usual, but a couple of weeks ago I began to feel the stirrings of a Donald Duck attitude. So I wrote letters to the person whom I feel is primarily responsible for payment and delivered them to (a) a production company, (b) an attorney’s office and (c) a home on Blue Jay Way. Last weekend we were told that the lower-level person directly responsible for payment was “committed” to making things right (that word means next to nothing) and would get in touch with us before last Friday. She didn’t. We all know that honey works better than vinegar, but what do you do when honey doesn’t work for months on end? I was asking myself this yesterday. How do I play this? I don’t want to go ballistic but I don’t want to be a jellyfish.

(More…)
July 5, 2015 1:45 pmby Jeffrey Wells
20 Comments
Each and Every Blockbuster Is Funneled Through A “Very Small Window”

In a 7.2 Grantland piece called “Across the Universe: How World-Building Blockbusters Have Changed the Art of Screenwriting,” Kevin Lincoln discusses (a) the game of universe-building and (b) continuity in the service of a franchise with screenwriter John August (Go, Corpse Bride, Frankenweenie). Lincoln doesn’t quite ask why the scripts for almost all franchise blockbusters (with the curious exception of the two Captain America films) are spiritually suffocating, reprehensibly robotic and generally awful in terms of delivering intrigue or any kind of unusual flavor or humor or sliders or curves or palmballs. Pretty much everything that happens in these moronathons is a straight, over-the-plate fastball, but the main problem, story-integrity-wise, is that none are meant to be stand-aloners. Yes, old news — August is mostly re-stating things for the slowboats.

August observation #1: “So it’s this weird blend of wanting to create the best two-hour movie you possibly can and having to sort of function as a TV showrunner, charting out the whole series, even though as a screenwriter, you’re only going to get paid for that one movie.” August observation #2: “The more that has come before you, the tighter the circle of expectations is on you. Often the expectations the studio has are expectations the audience has. They’ve created this very small window of what they feel is a reasonable acceptance of an idea.”