I hate to be the pain in the ass with all the Star Wars jubilation going on, but I wish that J.J. Abrams or someone on the team would begin to speak about the Episode 7 internals — tone, theme, story tension, etc. Comparisons to the original trilogy, if any. Is it more of a New Hope thing or in the vein of The Empire Strikes Back?  (They wouldn’t dare emulate Return of the Jedi or, God forbid, the prequels.). What’s the basic tale?  What are the stakes?  How much investment in psychological, character-driven stuff and how much straight action?  Did J.J. follow a whammy chart?Because all we’ve been hearing about for months is the purely visual boilerplate stuff — names, hardware, BB8, physical shooting aspects, VFX, etc. 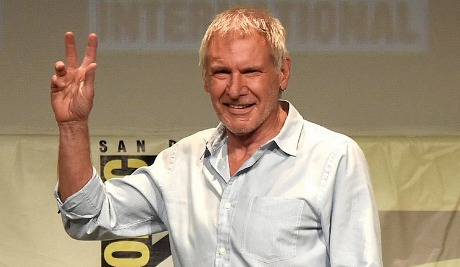 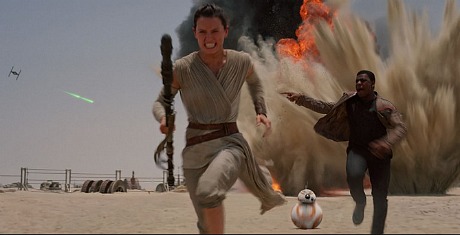 Jennifer Lawrence has been outspoken in the past about (a) not wanting to hear any Hollywood producer tell her to lose weight for a role ever again, (b) if they don’t like it they can take a running jump, and (c) she’s cool with how she looks and that’s that. And here she is telling the Hall H crowd at ComicCon…well, she’s actually holding herself back here. But honestly, look at her. Does she appear to have been ignoring the general Hollywood rule about watching your weight? She looks like she’s been eating nothing but fruit and dressing-less salad and treadmilling every day.

We all know what “may I help you?” means 94% of the time. It doesn’t mean “may I help you in some way?” It means “I, being responsible for maintaining order and protocol around here, am suspicious of your status or your intentions, and I’m therefore going to politely get in your face or challenge you in some way.” The vibe that often accompanies makes it one of the chilliest, most borderline hostile four-word phrases in the English language right now. When I hear it my blood runs cold.

But at the same time we’re all obliged to pretend that the person asking is, of course, trying to be truly helpful in some earnestly gracious way, and so we have to respond with a nice gentle alpha vibe and the right kind of smile as we explain that we don’t actually deserve anyone’s suspicion…hah-hah!…and that our intentions are totally cool and legit. The only way it’s not a hostile question is when the questioner is a serious pro and has an especially nice way of speaking and knows how to say it without agitating people. But those folks are few and far between.

Filed by Variety‘s Guy Lodge during the 2014 Venice Film Festival: “Screwball comedy was already a retro affair when Peter Bogdanovich mastered it in 1972 with What’s Up, Doc? Forty-two years later, that ageless throwback is the standard to which the director aspires in She’s Funny That Way, an enthusiastic but low-fizz romantic farce that gets by principally on the charms of a cast speckled with gifted funnymen (and, more particularly, funnywomen).

“At once invoking genre forebears like Ernst Lubitsch and contemporaries like Woody Allen, this busy tale of a Brooklyn callgirl wreaking havoc among the romantically frustrated cast and crew of a dud Broadway play accumulates the necessary narrative chaos without ever building a full head of comic steam. The diverting result will find a modest audience principally among those old enough to recall Bogdanovich’s glory days.”

Almost all of the Rotten Tomato and Metacritic cool kidz are in love with Sean Baker‘s Tangerine (Magnolia, opening today in NYC), and you can’t blame them. I liked it myself. Okay, I mostly liked it. And it does have a raw, on-the-fly attitude that you can’t help but admire. Spirited and alive, Tangerine is a lower-depths screwball dramedy and an instant addition to any films-about-Los-Angeles pantheon.

Can we talk? Everybody loves Tangerine because it was shot fast and cheap on an iPhone 5 and because it feeds into the current vogue for all things transgender, which the cool kidz are terrified of because they don’t want to be seen as insensitive or indifferent to the latest cultural whiff-spray. I’m terrified myself, but I also genuinely liked Tangerine‘s freshness and no-bullshit vitality, and because it balances an aura of skanky, no-hope nihilism with currents of tenderness and compassion.

The only thing I don’t like about Tangerine is having to like it because the thought of saying you don’t like it is too terrible to contemplate. Nobody wants to be on the outs with the cool kidz, nobody wants to fall under suspicion, and nobody would dare look askance at a film that was shot for dimes and quarters on an iPhone…are you kidding me?

Things kick off on Christmas Eve when Alexandra unintentionally tells Sin-Dee, who’s just gotten out of jail, about Chester, Sin-Dee’s drug-dealing pimp/boyfriend (James Ransome), having been unfaithful to her, and — worse!– not with another tranny but a biologically genuine, raggedy-looking white chick (Mickey O’Hagan) named Dinah. So Sin-Dee sets out looking for Dinah and Chester, determined to force the truth out of both and see what’s what.

The legendary Omar Sharif — Sherif Ali, Yuri Zhivago, Nicky Arnstein — has passed at age 83. Never just an actor but a man about town.  A European gambler for decades, quite the bon vivant and ladies man in the ’60s and ’70s. Always cast as exotic, enigmatic, well-mannered fellows with a smooth line, Sharif was on top for 13 years cruise (’62 to ’75) in a run of Hollywood films that ranged from world-class to tolerable to awful, but you have to expect a mixture. At least he had that golden six year period between ’62 and ’68.

Sharif was forever defined by his striking, career-making English-language debut as Sherif Ali ibn Kharish, a friend and ally of Peter O’Toole‘s T.E. Lawrence in David Lean‘s Lawrence of Arabia. And then by his lead role in Lean’s Dr. Zhivago, giving a restrained and dignified performance as a humanist physician swept along and crushed by the Russian revolution. Sharif also scored as gambler Nicky Arnstein in William Wyler‘s Funny Girl (’68) opposite Barbra Streisand.

Sharif made a lot of crap in the ’60s and early ’70s — The Yellow Rolls Royce, Genghis Khan, Marco the Magnificent, The Poppy Is Also a Flower, The Night of the Generals (a terrible decision to play a German officer in World War II, requiring heavy makeup that didn’t work), Mackenna’s Gold, Che (another big mistake that definitely compromised his Lawrence/Zhivago halo), The Horseman, Mysterious Island, The Tamarind Seed, et. al.

And then God smiled again when Sharif landed a strong supporting role as a cruise ship captain in Richard Lester‘s brilliant Juggernaut (’74). His last half-decent role in the big-time was his second performance as Arnstein (a supporting part, almost a cameo) in Funny Lady (’75).