Support on Patreon Follow @wellshwood
21 Comments
Rubbing the Wrong Way, “Very Depressed,” Under The Gun, “Like A Failure”

I don’t care how many Francis Coppola interviews you’ve seen or listened to over the years. This series of clips of a 6.9 92nd Street Y discussion between Coppola and Columbia film professor Annette Insdorf (the people in charge of posting these interviews always seem to drag ass) is wonderfully entertaining and illuminating. In late ’81 I cold-called Coppola when he was staying at the Sherry Netherland, and for whatever reason (possibly because I was fearlessly loquacious due to having dropped a quaalude) he stayed on the phone with me for well over an hour. I published the interview in a two-part q & a format in The Film Journal, which I was managing editor of from late 1980 to the early summer of ’83.

Two and half years ago I was bitten by the Judy Greer bug, particularly by her smallish but poignant performance in Alexander Payne‘s The Descendants — a supporting turn that definitely warranted an Oscar nomination. Since then she’s worked a lot, written a book, scored nicely as Lily Tomlin‘s girlfriend in Grandma, played inconsequential roles in a pair of 2015 blockbusters — Jurassic World and Ant-Man — and landed a rich ongoing role in FX’s Married. The Week‘s Scott Meslow has joined the team by saying, quite appropriately, that this isn’t enough. Greer needs to snag a super-role or two…something legendary, zeitgeisty. He concludes with a Greer pitch: “Judy plays Judy, a ferociously skilled actress who keeps getting cast in bland, forgettable bit parts: a nagging mother, a gossipy sister, a long-suffering wife. Fed up with an industry that refuses to give her a decent role, she breaks out on her own and starts a Hollywood studio. Or a detective agency. Or maybe a vampire bites her. Whatever. Just grab the best script you have lying around right now — as long as it features a real role for a talented actress. She’s good for it.” 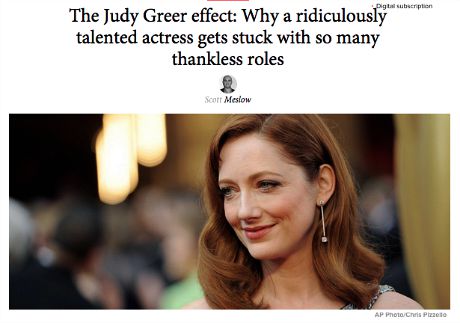 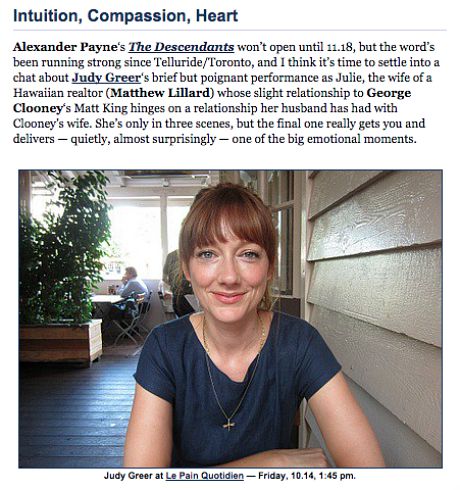 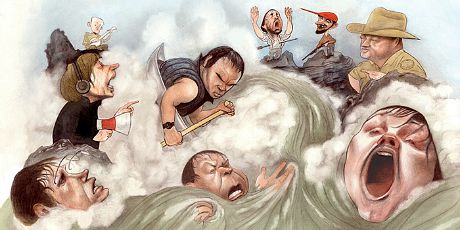 The following is a true story. I was starting something with an L.A. woman in the early aughts. I was intrigued as far as it went, but then she eventually conveyed what the situation was. She was seeing two guys at the time, and I was basically being auditioned as a back-up in case one of them didn’t pan out. She was serious. There were two pitchers on the mound (alternating innings?) and I was being told that if I wanted to I could start warming up in the bullpen just in case. I told her I didn’t care for this arrangement, and her response was to basically “you’re throwing away an opportunity here.” I might step into a situation if a woman is seeing another guy — maybe, depending — but not two.

Almost everyone has experienced at least one movie breakup moment. Even if the decider didn’t act on it right away. You know what I’m talking about. Any time you fall heavily for a film you always want to see it two or three times, at least, and so you take the hot lady of the moment to see it and she doesn’t get it — she’s either mezzo-mezzo or distracted and hates it or whatever. And right away you know.

You might continue to see each other and have some really good times, but that sinking feeling tells you it’s never going to pan out, not really, because she wasn’t wise or seasoned or deep enough to get that film. Because rejecting exquisite films is a blade of grass that tells you a lot about a person. Not everything but a lot.

“Though Trainwreck is a robust comedy, ranging from genial to zingy to uproarious, it’s essentially a romantic melodrama of self-abasement, self-deception and self-discovery. Its subject is the proximity of pleasure and pain, of self-affirmation and self-doubt. Its resolution involves love, which, in Apatow’s view, is no renunciation or simplification, but just another mode of difficulty, a kind of fulfillment that emerges from characters who are already formed and who merely put themselves and each other to new tests. 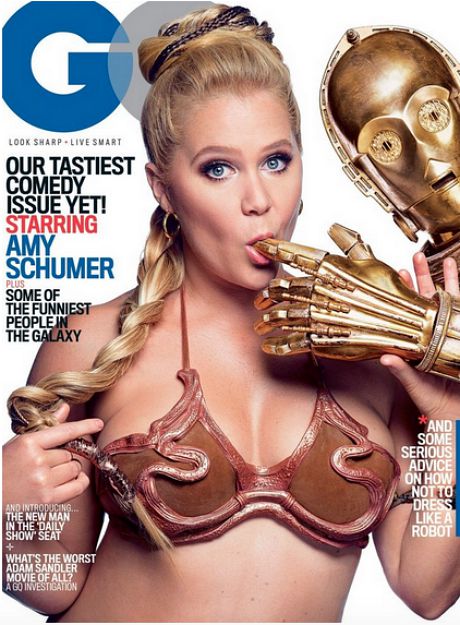 7 Comments
A Little Too Speckly

A couple of days ago I bought the recently released Masters of Cinema Paper Moon Bluray. Some of it is too grainy, too halo’ed…bothersome. But it still has Tatum O’Neal‘s Oscar-winning performance as Addie Pray. Like so many younger characters in so many parent-child movies made since Paper Moon, she’s much shrewder and in some ways even more mature than Ryan O’Neal‘s Mose. The best Bible-selling clip is after the jump. In fact, the scene with the widow and her five or six daughters is probably the best in the film.