Support on Patreon Follow @wellshwood
35 Comments
Will The Revenant Break The Mold?

In my 7.14 Telluride spitball piece, I naively wished for an appearance of Alejandro G. Inarritu‘s The Revenant. And then last Friday’s debut of the first Revenant teaser got everyone excited. But the down-to-earth reality is that The Revenant (20th Century Fox, 12.25) will not be in Venice, Telluride or Toronto.  I’m actually told it won’t be finished until December, but I doubt that.  It’s certainly not a good idea if Inarritu and 20th Century Fox want The Revenant to be a serious Best Picture finalist.

The Sasha Stone rule is that Best Picture contenders must be seen by October…at least. Every Best Picture winner over the last decade has either been festival-screened or theatrically released before 11.1. Birdman (first screened at Venice/Telluride), 12 Years A Slave (Telluride), Argo (Telluride), The Artist (Cannes, Telluride), The King’s Speech (Telluride), The Hurt Locker (a 6.26.09 release that premiered at Venice/Toronto in ’08), Slumdog Millionaire (Telluride, commercially opened in November ’08), No Country for Old Men (Cannes in May ’07), The Departed (opened on 10.6.06), Crash (opened in May 2005). Million Dollar Baby (opened on 12.15.04, began to be screened shortly before that) was the last Best Picture winner that popped in December. 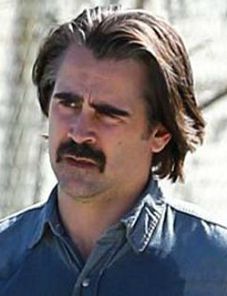 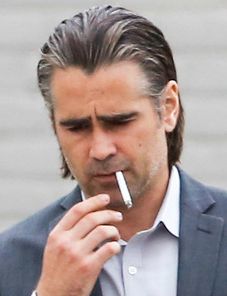 Now that Ant-Man has opened and been enjoyed nationwide, does the HE readership understand that I was totally on the money when I said what a surprisingly tight and well-done kick it is, and that it’s dryly self deprecating as well as sharp and fast and disciplined as a Marine, and yet it regards its own story elements and emotional undercurrents seriously? Does everyone now understand how tiresome and flat-out blind some of the naysayers were, and that these guys are only interested in specific geek fantasies that wank them off in just the right way (i.e., according to their particular emotional needs), and that they live in their own pathetic little wanker worlds? 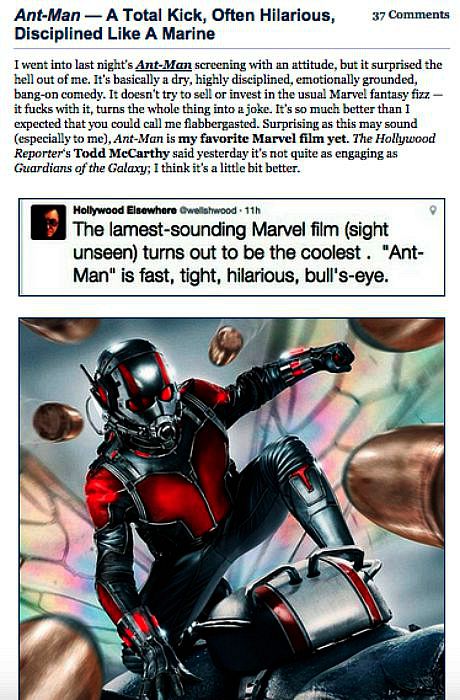 It hit me last night that the main-title themes for Henry King‘s The Bravados (’58) and John Ford‘s The Man Who Liberty Valance (’62) are nearly identical. Listen to the Bravados music (which is credited on the Wiki page to Alfred Newman, Hugo Friedhofer and Lionel Newman) and now Cyril J. Mockridge‘s Liberty Valance theme — pretty close to plagiarism, I’d say.

But the Liberty Valance Wiki page credits the score to both Mockridge and Alfred Newman, and Mockridge’s Wiki page describes him as “a staff composer for 20th Century-Fox for years, frequently working with Alfred Newman and Alfred’s brother Lionel.” I’m assuming that Mockridge asked Alfred if he could rip off his Bravados main-title theme as a favor, and the esteemed composer said sure, what the hell.

We all know that Moe Greene took a bullet in the eye in the final moments of The Godfather, but now he’s really dead. Poor Alex Rocco, the deep-voiced character actor who played urban goombahs for nearly four decades (from ’67’s The St. Valentine’s Day Massacre until Sidney Lumet‘s Find Me Guilty), died yesterday at age 79. But honestly? The only other Rocco performance that I genuinely enjoyed besides Moe Greene is/was Jimmy Scalise in The Friends of Eddie Coyle (’73). Even his mafia don performance in Find Me Guilty was a little underwhelming. Let’s just say Rocco peaked with The Godfather and Eddie Coyle and let it go at that. Friend: “You obviously never saw The Famous Teddy Z.” Me: “Who?” Friend: “One of the great unheralded TV sitcoms of all time. It didn’t last a season on CBS yet Rocco’s performance as an agent won him an Emmy.”

For those who may been away or not paying attention in early June, you need to avoid the 25th anniversary Bluray of Goodfellas (which popped on 5.5.15) because it looks darker, thicker and browner than the 2007 Bluray version, which is far superior. Don’t be misled by the fact that Scorsese approved the 25th anni version — sometimes it looks okay but mostly it seems covered with a mixture of lentil soup and butterscotch sauce. To my eyes it’s a constantly irritating thing to sit through. Just remember the name Brownfellas and the fact that Warner Home Video has helped you to remember this by tinting the cover a brownish amber. One more time: Brownfellas is bad, but the 2007 and 2010 Bluray versions are just fine. 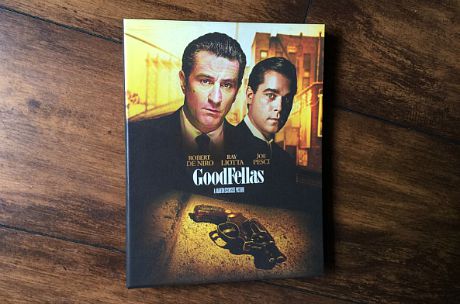 11 Comments
How Spike Jonze’s Her Should Have Ended

On 11.13.13, I shared an alternate ending of Spike Jonze‘s Her with a few friends (including some critics and columnists). A much better ending, I should say. Here it is: “As we all know, Her ends with Samantha (Scarlett Johansson) more or less dropping Theodore (Joaquin Phoenix) — something about her having evolved so far and taken in so much and gone to so many wondrous and mystical places in her head with Alan Watts and possibly others that she’s no longer able to just simulate a girlfriend experience and so she’s expanding her wings and moving on. Or something along those lines. (If I’m not mistaken the same thing has happened with Amy Adams’ OS1 relationship.) The OS1 software has evolved itself out of being an emotional relationship surrogate for lonely humans and has gone up and into the universe….right?

“This is where and why the movie is going to lose Joe Popcorn. The film ends with Amy dropping her head on Joaquin’s shoulder as they sit and stare out at the vast LA cityscape, but it’s not quite enough. The movie ends, but the way it ends isn’t an ‘ending.’ It just kind of slows to a stop. It’s an ending that says, ‘We haven’t figured out an ending but at least we’re ending on a sad kind of note.’

“Here’s how it should end. We know that Theodore’s intimate letters book has been published and gained, let’s presume, a certain attention, a certain fame. We include a brief scene near the end in which the creators of OS1 get in touch with Theodore and tell him how much they loved his book and particularly his voice (both inwardly and stylistically), and that they have a proposition for him to think about. Theodore has presumed that they were getting in touch with him to express regrets about his relationship with Samantha going south, but this is surprising. A proposition…?

Here’s another drag-ass situation on top of the 92Y Coppola posting. On 7.10 John Turturro sat for a master class at the Jerusalem Film Festival. Two days later CinemaScope‘s Yair Raveh posted a video of Turturro riffing (with Israeli filmmaker Avi Nesher) about getting started and his relationships with Martin Scorsese, Woody Allen, the Coen Brothers, Michael Cimino, Nanni Moretti, etc. And then Raveh waited seven days to send me the 7.12 video — a full week! The Jerusalem Film Festival ends/ended tonight.