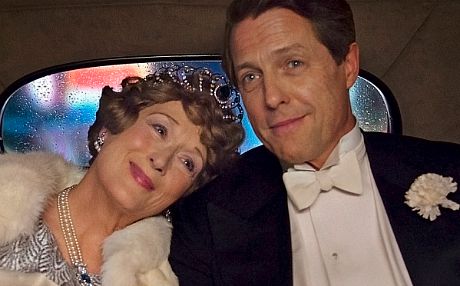 Despite Indiewire having reported that Sydney Pollack‘s Amazing Grace, a never-released 1972 doc about Aretha Franklin performing gospel tunes inside a Los Angeles church, will premiere at the Toronto Film Festival, I’m told it’ll play the Telluride Film Festival first. And thank your lucky stars if you’re catching it at Telluride or Toronto because a money dispute may prevent Amazing Grace from being seen commercially. Franklin, 73, has just told the Detroit Free Press‘s Brian McCollum that she and her attorney may file an injunction to prevent the doc’s release. Presumed translation: Aretha wants a bigger paycheck.

Franklin’s gospel concert, performed inside L.A.’s New Temple Missionary Baptist Church (So. Broadway near 87th Place), happened 43 and 2/3 years ago. Pollack shot over 20 hours of 16mm footage and had hoped to put the film out in concert with Franklin’s Amazing Grace album. But a release never happened due to music rights issues or some other monetary hangup. In January 2010 Variety‘s Jon Burlingame reported that producer Alan Elliott and editor William Steinkamp had begun to assemble a final definitive cut.

I honestly hadn’t paid the slightest attention to French actor Jean-Hugues Anglade since he had a brief walk-on role in John Adams, the 2008 Tom Hooper/HBO miniseries. I remember saying as I watched it, “Hey, that’s the guy who starred in Roger Avary‘s bank-robbery movie, Killing Zoe!” But now JHA is a real-life hero who jumped into a scary situation with an Islamic wacko during a train ride between Amsterdam and Paris earlier today. Anglade alerted the law by pulling an alarm, and in so doing cut himself with shattered glass.

But the primary hero, to go by all accounts, was an Air Force guy named Spencer Stone.

Gunfire happened between the wacko, a 26 year-old Moroccan guy who was “reportedly armed with a Kalashnikov and several knives,” and two Americans — Alek Skarlatos, an Oregon Army National Guard guy returning from Afghanistan, and Airman First Class Spencer Stone. One of them was harmed during the fracas, but not seriously. Crisp salutes for Stone, Skarlatos and Monsieur Anglade, and thank God no one was killed. Sidenote: Maybe some iPhone video will turn up later this evening? This only happened about nine hours ago. Somebody must have caught some portion of what happened. A news story without footage is fairly unusual these days.

Update from the N.Y. Times‘ Adam Nossiter: “The two American service members who tackled a gunman on a high-speed train traveling from Amsterdam to Paris rushed him even though he was fully armed, then grabbed him by the neck and beat him over the head with his own automatic rifle until he was unconscious, one of them said in television interviews here on Saturday.

Thanks to Forbes.com’s Natalie Robehmed and her 8.20 story about the highest-paid actresses over the last 12 months, I’m finally paying attention to Bingbing Fan, a hot Chinese actress who pulled down $21 million (pre-tax) from roles in X-Men: Days of Future Past and The White-Haired Witch of Lunar Kingdom plus commercial endorsement revenue from Chopard and L’Oreal. Fine. Hello, Bingbing!

And now that I’ve made Ms. Fan’s acquaintance, I’d…well, I think I’d like to go back to not contemplating her if that’s okay. It’s not just my aversion to Asian cinema (sorry) and particularly historical Asian cinema (especially if it involves swords) but…I’m not going to go there.  Let’s drop it.

The big news about the Forbes survey is not that all these women are doing so well but that guys are getting paid a lot more.

How many of the top earners made their dough by acting in really good films and how many brought in the dough with shitty mass-market projects and/or commercial endorsements?  Just about all of them.

How many noteworthy performances have been based upon an actor’s imitation of the director of the film in question? Or, to broaden it out, based upon imitations of anyone in particular? It’s common knowledge that the New Yawk accent used by Peter Sellers in Stanley Kubrick‘s Lolita was an imitation of Kubrick’s Bronx-cab-driver patois. I recall reading that Albert Finney‘s performance in Annie (’82) was basically an imitation of director John Huston? Are there any others on the list? I have a special liking for this Lolita scene because Sellers is actually blending Kubrick’s voice with the manner of a closeted gay guy of the period.

An old friend and his gentle, kindly wife are allowing me to crash at their condo during the 10-day Toronto Film Festival. This morning I sent them the following: “Thanks again to you both. I arrive in Toronto on Wednesday afternoon, 9.9, around 3:30. Flying in on Porter. I’ll go right to Bell Lightbox for my press pass & materials and whatnot. I’ll be at your place by 6 or 6:30 pm…something like that.

“Over the first five days I’ll be rising earlyish and attending screenings by 10 am or sometimes earlier, and then back around 11 or midnight. During the second five days everything slacks off. No promises but I’ll try to wangle some screening tickets. We’ll see how it goes. Maybe we can do a dinner on Wednesday night. On me, of course.

“Before it all starts we need to address the inevitable, which is referenced in that famous Chinese saying: ‘House guest like fish. After three days, stink.’

A friend who hadn’t seen Mad Max: Fury Road in theatres just watched the Bluray last night, and he noticed that portions had accelerated and slowed-down frame rates. Not the same thing as the herky-jerky motion in Saving Private Ran and Gladiator, but in the same vague ballpark. He’d just installed a Sony 4k projector and was running data up-rezzed from an Oppo, so he wasn’t sure if it was the film or the hardware. Then he came upon a quote from dp John Seale, which basically said the Mad Max frame rates were finely manipulated all through:

“Something like 50 or 60 percent of the film is not running at 24 frames a second, which is the traditional frame rate,” said Seale. “It’ll be running below 24 frames because [director] George Miller, if he couldn’t understand what was happening in the shot, slowed it down until you could. Or if it was too well understood, he’d shorten it or he’d speed it up back towards 24. His manipulation of every shot in that movie is intense.”