Brian Wilson‘s ten-piece band made a lot of people happy tonight at Vibrato, the Beverly Glen jazz club. Journos, publicists and Academy members clapped, cheered, danced and whoo-hooed to a 40-minute set of Beach Boys hits. All were gathered to celebrate….okay, acknowledge the launch of Love & Mercy‘s award-season campaign. I was sitting at a center table with Indiewire‘s Bill Desowitz, Variety‘s Kris Tapley and producer Don Murphy. The high point came when Love & Mercy star Paul Dano walked on stage and joined the band for “You Still Believe In Me”…not an easy song to perform but he brought it home. What a night! (Note: The band sounded better than what these videos are conveying — the iPhone 6 Plus can only capture so much range.) 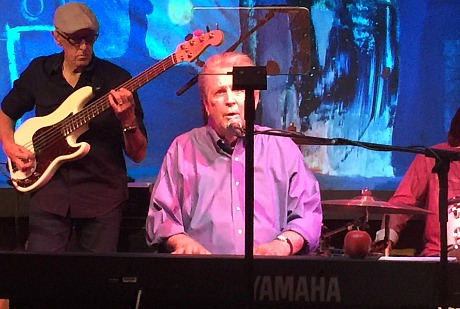 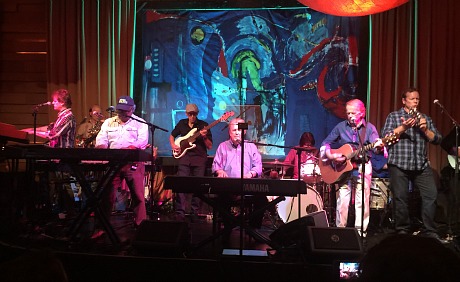 During the Love & Mercy luncheon I met actor Nicolas Coster, who’s probably best known for playing Markham, the “country club” lawyer who’s persistently questioned by Robert Redford‘s Bob Woodward in All The President’s Men (’76). I also saw Coster in a 1977 Broadway production of Simon Gray‘s Otherwise Engaged, which starred Tom Courtenay under director Harold Pinter. Born in England in 1933, Coster has been working steadily since the mid ’50s. He and his lady are living on a nice big yacht in the Marina del Rey, he said. The slip rent is $900 a month. He invited me to pay a visit. I might just do that.

A small dead bird was lying on my Oriental when I returned from today’s Love & Mercy luncheon at Craig’s. Zak, my two-year-old ragdoll, was proudly sitting next to it. Cats bring their kills home as tribute, of course. So I didn’t immediately put the bird into a folded paper towel and toss it in the garbage bin. I petted Zak and told him he was a fine hunter and a good guy. Caressed and gave him a neck rub for a full minute or so, making sure that he felt loved. I removed the carcass (a little gray guy with a splotch of red above the bill) a couple of minutes later. 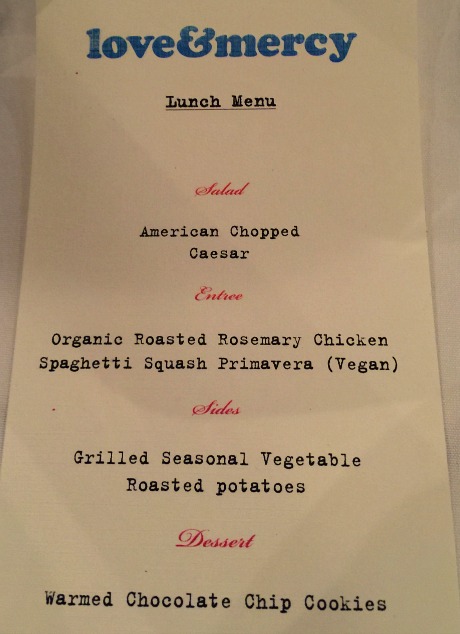 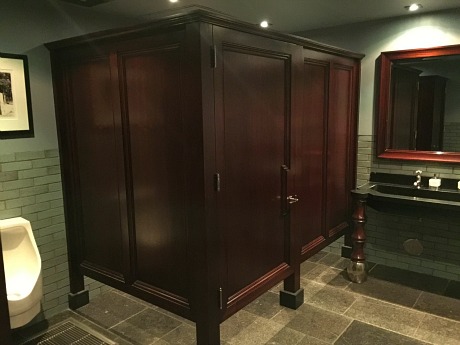 Now this, located in the men’s room at Craig’s, is a toilet stall! Made of fine polished wood, plenty of room inside — like something you might have found on the Titanic.
October 12, 2015 4:55 pmby Jeffrey Wells
61 Comments
Arcane Fetishist

At a recent BFI London Film Festival discussion Chris Nolan was once again proselytizing for the deep blacks and (he insists) higher-quality resolution of celluloid projection, and wondering why so few others seem to be on the same page. “When you go to an art gallery you don’t look at a photograph of a painting — you look at the painting,” Nolan said. “But in the film world they’re very happy to show a DCP of Lawrence of Arabia. With the best will in the world it can only be an approximation of what the film really is, yet it’s billed as the film itself.”

Nolan and Quentin Tarantino and other film devotees are encamped on a very small Pacific island with the tide coming in. And they know it. I never want to see film “go away” entirely. We all understand the importance of preserving films on celluloid, but you can’t change the writing on the wall. Nor do I fully agree with Nolan’s quality argument.

I’ve seen 70mm mint-condition prints of Lawrence of Arabia projected five or six times in first-rate theatres (Zeigfeld, Academy, Egyptian, Aero) and while it might have generated a certain hard-to-define feeling that one can mystically derive from celluloid projection, I swear to God it didn’t look noticably “better” than the DCPs. I’m attended DCP Lawrence showings three or four times, and…okay, put me in jail but they’ve looked absolutely fabulous.

I’m okay with Han Solo biting the dust, and you KNOW Harrison Ford has been looking for this to happen since 1982, at least. (Right?) I only know that if you type “Han Solo Dies” on Twitter, you get the feeling that everyone out there is sensing what’s to come, or has been hearing it so much from others than they’re starting to believe it. One request: Please, please don’t include a third-act moment in which John Boyega or Daisy Ridley see a spectral vision of a grinning Han, Obi Wan and Annakin standing side by side next to a bonfire and waving to the mortals. 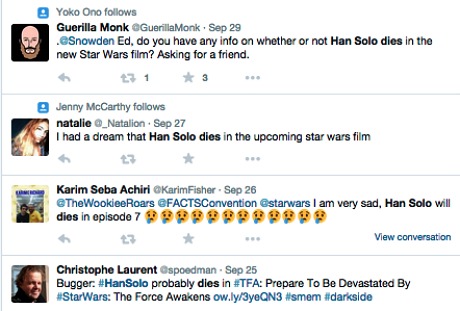 Han Solo’s defunct
who used to ride the Millenium Falcon
and break onetwothreefourfive parsecs like that on a Kessel Run
Jesus
He was a handsome man
and what I want to know is,
How do you like your Greedo-shooter
Mister Death 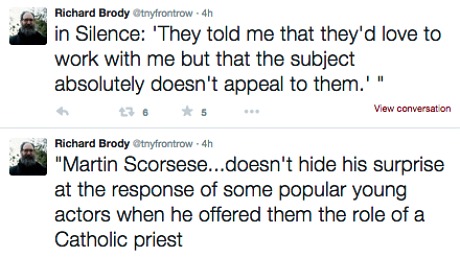 “This is a major, triple-A-approved, Apocalypse Now-influenced African inferno flick — a real original, like nothing I’ve ever quite seen before, like nothing I knew how to handle. Anyone who attends Sunday services at the Church of the Devoted Cinephile will have to grim up, man up and buy a ticket. (And that means women also.) Often jarring and horrific and in very few ways ‘pleasant’ but a ravishing thing, a cauldron of mad-crazy intense, something undeniably alive and probing and hallucinatory. Yes, it’s horrific but never without exuberance or a trace of humanism or a lack of a moral compass.

“We’ve all seen violent films that try to merely shock or astonish or cheaply exploit — Beasts of No Nation is way, way above that level of filmmaking. It’s often about cruel, horrifying acts but filtered through a series of moral, cultured, considered choices, about what to use and not use and how to assemble it all just so. And yet over half of Beasts is gripped by madness — a kind of fever known only by war veterans and particularly (as this is the specific focus of the film) by children who’ve been forced into killing by ruthless elders.