Support on Patreon Follow @wellshwood
15 Comments
Son of “The More Gnashing of Teeth Among 1.85 Fascists, The Better”

Criterion’s Bluray of Wim Wenders‘ The American Friend (’77), which was announced today, will be presented within a 1.66:1 aspect ratio, which is how it was projected at the New York Film Festival a little more than 38 years ago. The American Friend “is one of those films that I wanted to literally move into,” I wrote last year. The gloomy Hamburg realm was, at the time, a reflection of my own personal weltschmerz and vice versa. It inspired me to pitch a column to a couple of publications called ‘Hollywood Weltschmerz.’ I was (and perhaps on level I still am) Dennis Hopper taking polaroid photos of himself while lying on a pool table. In late ’77 or early ’78 I tried to figure a way to paste my face onto Bruno Ganz‘s in that famous poster, but I couldn’t get it right.” 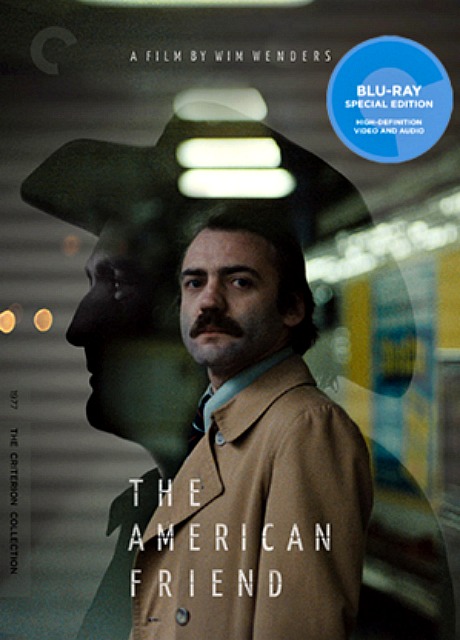 I’ve heard second-hand poop from a guy who’s seen Angelina Jolie‘s By The Sea (Universal, 11.13), which will open AFI Fest on 11.5. It’s been described as “an old-fashioned European art film” and, the source added, a good one in that vein. But now Jolie is describing it as a grief movie about her mother. I’m telling you right now that bummed out feelings are not, in and of themselves, anyone’s idea of compelling subject matter for a film. 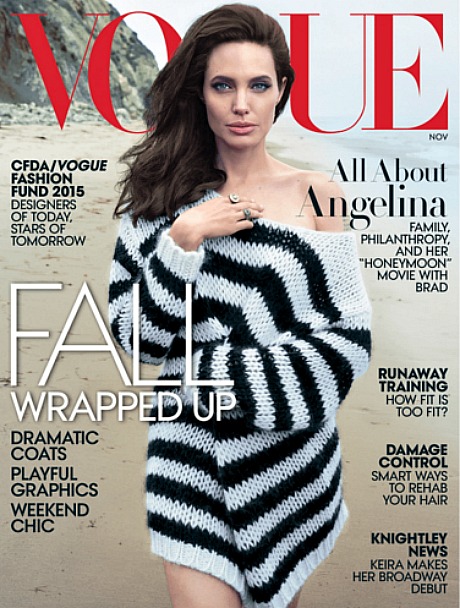 I’m saying this having just struggled through Reed Morano‘s Meadowland, another grief movie. Nobody can tell me much about downish mood pits, trust me, and I sure as hell don’t want to sit through a film that tries to soak me in someone else’s quicksand. Thanks but nope.

In a new Vogue interview, it’s said that Jolie “wanted to explore bereavement — how different people respond to it. She set the action in the ’70s, when her mother was in her vibrant 20s, and began simply with a husband and wife. She gave them a history of grief, put them in a car, and drove them to a seaside hotel to see how the pair — Roland, a novelist with a red typewriter, and Vanessa, a former dancer with boxes of clothes and hats — attend to their pain. Vanessa is frail, tortured, hemmed in. She feeds her mourning a diet of pills and suicidal fantasies. Roland is defeated by the seclusion of her anguish, and drinks. And so it goes on until innocent newlyweds move in next door…”

“I always enjoy Bond movies but of course they are daft, and you need very intelligent actors to play them with just the right twinkle in the eye.” — The Guardian‘s Peter Bradshaw in a 10.16 post.

They weren’t always this way. Bond films didn’t start sipping the crazy water until Goldfinger. The first two, Dr. No and From Russia With Love, were tongue-in-cheeky with a light, self-amused attitude, but they didn’t stand on a rooftop and shout “look how batshit ludicrous we can be!” That attitude started to creep in with Goldfinger, gained traction with Thunderball and then went full-tilt boogie with You Only Live Twice.

Back to Bradshaw: “But the promotional machine insists that these intelligent people pretend to be glassy-eyed devotees in the cult of Bond and all its luxury-brand sponsors, for the benefit of journalists and hype-merchants who are themselves pretending. Perhaps the Bond cast will just freak out, en masse, on the red carpet and start screaming their hatred of Bond — like 12-year-old piano prodigies forced to practice 17 hours a day who end up deliberately smashing their fingers in a car door.”

It was obvious from the Toronto get-go that Marc Abraham‘s I Saw The Light, the latest biopic about a self-destructive musical genius, wouldn’t be cutting the award-season mustard. I called it a “mostly downish, spotty and not very enjoyable Hanks Williams biopic,” and a majority of the critical community — 69% if you apply a reverse Rotten Tomatoes subtraction — agreed that it was less than essential viewing. So it’s no surprise that Sony Pictures Classics has decided to bump I Saw The Light from a previously slated (and costly) 11.28 opening to 3.25.16 — the elephant’s graveyard. SPC Co-President Tom Bernard has told Deadline‘s Pete Hammond they were “happy” with the reception the film received at TIFF and that this “wasn’t a factor” in shifting the date. If you want to believe that, go right ahead. 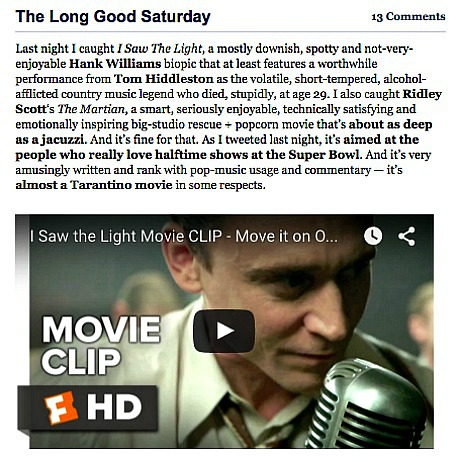 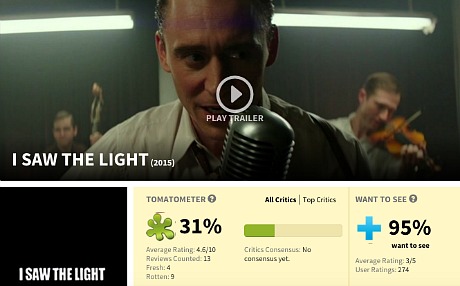 I swear to God, time and eternity that the two finest openers this weekend are James Vanderbilt‘s Truth (Sony Pictures Classics) and Cary Fukunaga‘s Beasts of No Nation (Netflix + select theatrical)…far and away, no question, irrefutable. The educated 40-plus audiences who are thinking about seeing Steven Spielberg‘s Bridge of Spies really need to rethink this — Truth is way more stirring and far less familiar for the cultured cineaste. (With Spielberg and Tom Hanks working together again for the fourth time, you’re going to get “familiar” — trust me.) If you want to see Room you’re going to do that…fine. And if you’re looking to savor one of the most beautifully designed horror flicks of this century, you’ll have to catch Crimson Peak. But the two best openers are the two best openers — plain fact, I don’t lie. 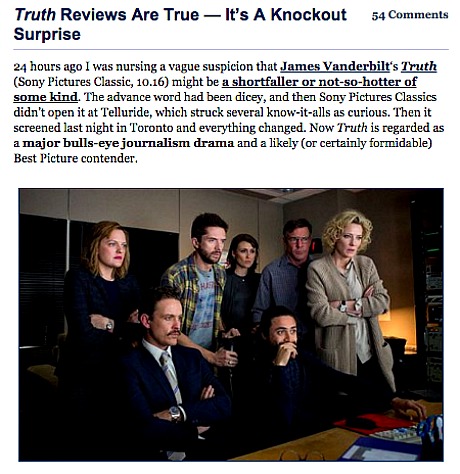 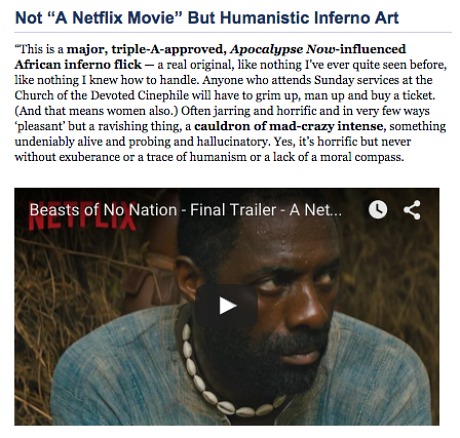 Do you speak Room? Has Room lifted your heart or at the very least parted your waters? After seeing Room did you climb to the nearest rooftop in order to sing and shout for Brie Larson‘s all-but-certain Best Actress nomination? With A24 proudly releasing it today the Room Brigade, composed of journalists and industry folk who saw Lenny Abrahamson‘s film in Telluride or Toronto or in recent local screenings, will either acquire new believers this weekend or it won’t. I’m presuming that it will as Room has seemingly struck some kind of chord. Bigger than me, bigger than Hollywood Elsewhere. Who am I to stand in the way or talk shit? 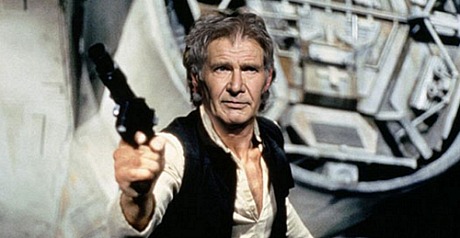 I’ve declared once or twice over the last couple of weeks that I’m out of the Room discussion. I have no dog in it, no stake, nothing to prove or lose. Room will do what it will do. I only know I’m unable to connect with it save for a certain admiration for young Jacob Tremblay‘s performance (i.e., he makes the final scene work), and my attitude is basically that of Han Solo on a Millenium Falcon cruise through the solar system….”watch this!”

Han looks left as he passes by Planet Room, an ecstatic world filled with deeply moved, maternally-inspired women and feminized male critics. He can feel the passion and the delight and celebration below, but he knows this planet is not for him so he pushes on.

Han looks to his right as he passes by Planet Bridge of Spies, and again he shakes his head and goes, “A smart, decent film, okay, but a Best Picture nominee? And all because of Lou Lumenick and other guys in his corner of the room.” When Chewbecca hears the name “Lumenick” he goes “oowwwwgghhhrrrr!”

“Audacious, clever, entertaining, smart, harrowing. It’s the economy, stupid! Pic explains how a few guys brought the global economy to its knees in 2008. Carrel and Bale are great in leading character roles. One of the more praiseworthy films in a season of terrific movies. Which is not to say it will get Oscar noms.” — Another guy who attended last night’s DGA screening of The Big Short.