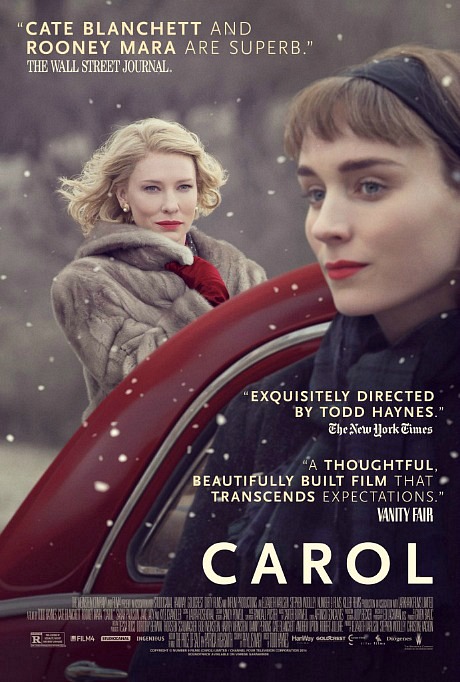 Listen to Deadline‘s Pete Hammond openly doubt Spotlight‘s Best Picture chances (“Let’s not get overboard here!”), claiming that it’s mainly a favorite of journalists and that rank-and-file types have yet to render a verdict so let’s wait and see, etc. And listen to Hammond and Gold Derby‘s Tom O’Neil go all kissy-face on The Martian, calling it “this year’s Gravity.” Hammond reasonably says “not so fast” about Joy, but says he’s spoken to people who’ve seen The Revenant and that it’s “phenomenal,” “Leonardo DiCaprio is in it for the Best Actor Oscar,” “very dark,” “two and a half hours,” etc. O’Neil, a Steve Jobs sentimentalist and lamenter, doesn’t like the idea of a guy (Leo) trudging across the snow and trying to survive. They both agree that Brooklyn and Room have the heat, certainly among women.

Adam McKay‘s The Big Short (Paramount, 12.11) screens tonight at AFI Fest — a big moment for Paramount and potentially an even bigger moment for presumed Best Actor contender Steve Carell…maybe. But this featurette is a little too generic, and I’m not sure what I feel about a director who always wears a scarf, which to me is like a director in the ’50s or ’60s wearing a beret and an ascot. If you ask me Paramount should have put out a featurette that answers The Big Adam McKay Question, to wit: how did a comedy director whose whole career since the turn of the century has been more or less about directing or producing low-rent Will Ferrell movies (Anchorman, Talladega Nights, Step Brothers, Land of the Lost, The Campaign, Casa De Mi Padre, Get Hard) suddenly spins around and directs an allegedly smart, fully-grounded drama (dramedy?) about the collapse of the American economy? Due credit and huzzahs if The Big Short turns out to be as good as some are claiming, but how did McKay’s transition suddenly come about? McKay to Paramount: “Hey, I know I’ve been making comedies for popcorn-munchers for the last 12 or 13 years but I’d like to upgrade my stock by directing something a little sharper and darker and more real-world adult…okay?”

A ton of movie sites have posted stories about their all-time favorite opening sequences over the last several years, and a lot of their choices are bullshit. The “authors” of these pieces don’t seem very thoughtful or perceptive — they mainly want you to click on 10 or 25 or 50 pages. There are two kinds of opening sequences that can be called great or highly memorable — one, the kind that put the primal hook in by whatever means and prompt you to say “Wow, I want to see the rest of this!” but don’t necessarily tell you much about the story to come, and two, the kind that do deliver key information about the story to come and/or the character who will be at the center of things.

A fine example of the first kind (“No clue what this is about but the footage and the vibe feel cool!”) is the George Gershwin-scored opening of Woody Allen‘s Manhattan (’79). It tells you two things about Allen’s lead character, Isaac Davis, which is (a) he’s head-over-heels in love with Manhattan (i.e., the film was shot before way, way before Brooklyn existed as a hipster habitat), and (b) that he’s a writer working on a book. That’s all it tells you, but it so wins you over that it’s like “forget it, I’m watching this movie to the end.”

A great example of the second kind is the music-free opening credit sequence in Sidney Lumet‘s The Verdict (’82). (Which I can’t find a clip for.) It’s basically a long, slow dolly-in of a gray-haired Paul Newman playing pinball in a low-lit bar somewhere, sipping whiskey from a shot glass, daylight outside. Right away you know he’s a guy with a problem or two and that difficult trials await. Another sterling example is the opening scene in The Godfather — tells you everything about who Don Corleone is, what the Corleone family is about, how it works, what the terms are plus the old-time gangster milieu. You’re fully informed by the time the scene ends, and totally hooked.

(More…)
November 12, 2015 3:14 pmby Jeffrey Wells
73 Comments
Allen and Brickman’s Annie Hall Screenplay Is Not The “Funniest” Ever, But It’s One Of The Most Resonant

The best comedies are not the “funniest” but the ones that make you laugh and pluck your heartstrings. I know that sounds sappy but it’s true. Exceptional comedies always touch bottom on some level by saying something true and lasting about the need for love and soul food, and by adhering to the rules or at least the attitude of good, well-written relationship dramas. You could say, in fact, that comedies that are just out to be “funny” are arguably the least impressive. Remember the words of the immortal Michael O’Donoghue: “Simply making people laugh is the lowest form of humor.”

The Writers Guild has officially voted Woody Allen and Marshall Brickman’s Annie Hall (’77) as the “funniest” screenplay of all time. How does that sit?

I love Annie Hall because it deals with real-deal neuroticism and urban-smart-people issues all the time, and so I have no problem with it winning. But calling it the “funniest” doesn’t sound right. Like the WGA’s the second- and third-place finishers Some Like It Hot and Groundhog Day, Annie Hall is a funny but wise film that deals with the altogether.  And because it reminds every viewer that life is often miserable and is over much too quickly, and that we keep getting bruised in relationship after relationship because we “need the eggs.”

My fourth-place finisher is Dr. Strangelove or: How I Learned to Stop Worrying and Love the Bomb (1964), screenplay by Stanley Kubrick and Peter George and Terry Southern.

Nobody will ever accuse me of jumping the gun on 45 Years. I finally saw it (well, most of it) a couple of weeks ago during the Savannah Film Festival, and while I wasn’t entirely blown away by Andrew Haigh‘s film, I was seriously impressed by Charlotte Rampling‘s performance. It started to hit me about…oh, one-third of the way through, certainly by the halfway mark. “Wow,” I murmured without moving my lips or making a sound. “She’s really doing something here with the most delicate of brushstrokes, and it’s building into something greater than the parts.”

I’m only about the 345th critic/columnist/journo to say this, but that’s why they pay me the big bucks…to be 345th in line! And then I was sitting in the front row of the Aero theatre last night and watching sexy, slender Charlotte with her sly, knowing smile and those slim gams and shiny black pumps as she was interviewed by Pete Hammond, and I was thinking “Yeah, I’d also like to be her trampoline…”

Inhabiting the soul of a good woman who comes to realize, 45 years into her marriage, that her husband (played by the doddering, paunchy, white-haired Tom Courtenay)…God, what to make of him?…is more of a shit than she realized and even possibly a kind of monster, Rampling never projects just one thing. At any given moment she’s conveying at least two if not three thoughts or conflicting feelings. Rampling flickers like a candle, like an anxious deer contemplating a pair of not-yet-glimpsed headlights, like a woman starting to consider the horrid possibility that her entire married existence has been…well, not exactly fraudulent but a good deal less and certainly far from glorious.