Anderson said two things I disagreed with — one, that Suffragette isn’t a good film (it very definitely is) and two, that Abigail Disney‘s The Armor of Light (which is playing at KWFF) is an “important” film that festivalgoers should see. It’s an honest, well-made film but important it’s not — the gist of my Middleburg Film Festival review is that it’s a good-hearted doc about a reprehensible culture (i.e., rightwing gunnies).

Almost two months ago (9.25) former N.Y. Daily News film critic Joe Neumaier interviewed Beasts of No Nation costars Idris Elba and Abraham Attah at the SVA theatre on West 23rd Street. I love the crack and timbre of Elba’s voice, but Attah’s African accent defeats me. (I wish I could say otherwise.) You’ll notice both are wearing suits that closely resemble the famous gray suit worn by Cary Grant in North by Northwest (’59). Technically Grant’s was a lightweight wool Kilgour suit, in a blue/grey fine glen plaid pattern while Elba and Attah’s suits are a lighter silver gray color. 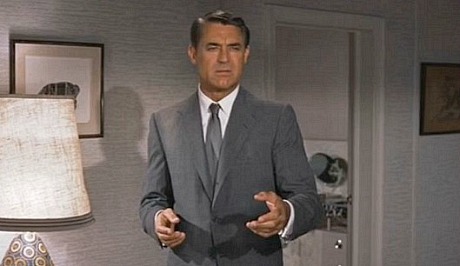 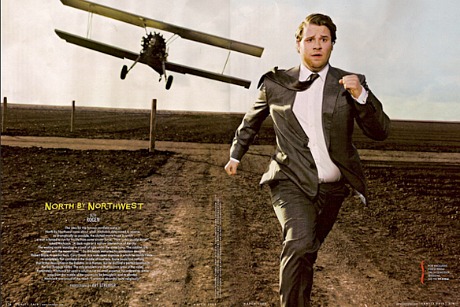 Never has the legend of Cary Grant’s North by Northwest suit been so diminished as when Seth Rogen wore a facsimile for a Vanity Fair Hitchcock tribute piece that run in February ’08.
(More…)
November 20, 2015 3:34 pmby Jeffrey Wells
46 Comments
Young Affable Dolt

I was chatting with Sammy, a 20something blonde from Chicago, during last night’s KWFF party at the Ernest Hemingway home. After about a half-hour the guy she came with (a Key West resident whom Sammy befriended when she lived here three or four years ago) walked over. I didn’t get his name but he was tall, good-looking, friendly — let’s call him Tom. The conversation turned to the film festival and Papa, Bob Yari‘s film about Hemingway which had screened earlier in the evening and which none of us had seen. I asked Tom if he’s seen Spotlight, which I said would be opening tomorrow (i.e. today) at the Tropic. “Uhhm, we have something else going on tomorrow,” he said. It’s not a festival film, I said — it’s opening commercially at the Tropic. “Oh, okay,” Tom said. So you’ve never heard of it? “No.” So you’re not much of a movie guy? “I’m a production guy,” he said with a certain pride and joie de vivre — a below-the-liner who works in the area. I asked if he knows about Atlanta being a hot place to shoot due to Georgia tax breaks and Pinewood Studios Atlanta. “Atlanta? Uhm, no,” he said. Inner dialogue: So how does that work, Tom? You’re a South Floridian in the business of making movies and commercials, and yet (a) you don’t have clue #1 about Atlanta being the hottest domestic place for film and TV production jobs and (b) you haven’t even heard of a film with a 97% Rotten Tomatoes rating and which has a reasonably good chance of winning the Best Picture Oscar? Talking to subdued-brain-wave guys is somewhere between stifling and infuriating. How deep is the quicksand?

Ron Howard‘s In The Heart of the Sea (Warner Bros., 12.11) has been trailering for ten months now. I’m close to numb at this point. Is there any possibility that it’s all an elaborate ruse — that Sea is just a series of impressive trailers and not actually a film? All this time it’s been portrayed as a “Chris Hemsworth and his shipmates vs. Moby Dick” thing. But now, suddenly, the focus is on Tom Holland as cabin boy Thomas Nickerson, who will eventually grow into Brendan Gleeson‘s Nickerson who, decades later, tells the Moby Dick source tale to Ben Whishaw‘s Herman Melville. What kind of marketing campaign introduces a new major character after almost a year of trailering, and with less than a month before opening? Something’s off — I can feel it.

The Boss (Universal, 4.8.16) appears to be a Melissa McCarthy programmer of no exceptional distinction — a rich-bitch-gets-her-comeuppance comedy. Expectations are modest due to the directing and co-writing contributions of Ben Falcone (McCarthy’s husband who also directed Tammy). But hats off to McCarthy for her reported 50-pound weight loss. Heavy is fine but obese is appalling, and McCarthy has finally understood that. Serious HE respect. McCarthy wears more turtlenecks in this film than Diane Keaton has in her entire screen career. Do the math. 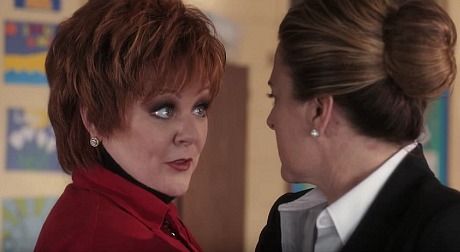 Andrew Renzi‘s The Benefactor (formerly Franny) has been on the festival circuit since debuting last April at the Tribeca Film Festival. I blew an opportunity to see it last night at the Key West Film Festival because (a) it hasn’t been well reviewed, (b) I have a prejudice against dramas in which the inciting incident is a car crash, and (c) I wanted to attend the big KWFF party at Ernest Hemingway’s old home instead. But you have to admit that white-haired Richard Gere looks awesome with that big red scarf looped around that natty tuxedo. Samuel Goldwyn will release this character-driven drama about grief (another one!) and obsession on 1.25.16.

From John DeFore’s 4.18.15 Hollywood Reporter review: “We all have one: That old family friend who dotes on us shamelessly, buying us houses and paying off student loans, beaming whenever we enter a room. They’re the worst, right?

“Andrew Renzi explores the worrisome side of Uncle Warbucks in The Benefactor, where Richard Gere plays a billionaire suffering addictions not just to morphine but to others’ attention and his own privilege. It’s easy to understand the actor’s interest in the part, in which charm, Gere’s bedrock asset, is a thin shell whose protection chips away painfully. But Renzi’s uneven script makes this a less sturdy vehicle than 2012’s Arbitrage, and a less marketable one given the absence of thriller elements that sustained that film’s character study. Still, there’s plenty here for Gere’s admirers to appreciate.

I wouldn’t go to see The Hunger Games: Mockingjay, Part 2 with a knife at my back; ditto The Night Before and the week-old Love The Coopers. I wouldn’t watch any of these if I was bored to tears on long plane flight and they were offered for free. In my mind they don’t exist; they represent only toxicity and cancer. Key West residents are out of luck, by the way, as far as catching Billy Ray‘s Secret In Their Eyes, the somber, 37%-rated, all-but-commercially-dead crime thriller. It isn’t booked at the local Regal sixplex, which is where all the mass-market megaplex crap can be found, and so I can’t even pay to see it. (My only L.A. screening opportunity was the night before last.) But here’s to to director Billy Ray for dismissing a “how much pressure?” question from Moviefone’s Phil Parrello — all journalists who ask “how much pressure?” need to be shunned. 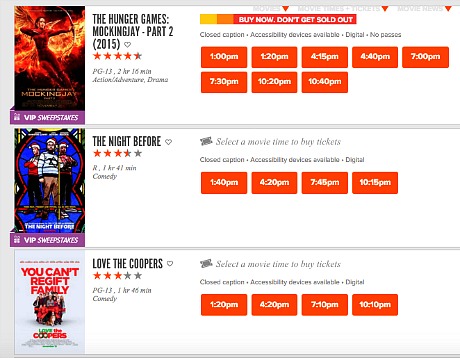