“The old Most Dangerous Game/The Naked Prey man-stalking format is uncomfortably imposed on a Mexican immigrant narrative in Desierto, a sharply made but simplistic second feature from writer-director Jonas Cuaron. Psychology and motivation don’t concern director Cuaron here, just the physical spectacle of the hunter and the hunted. If the story is meant to represent a microcosm of the immigration problem, it’s woefully reductive. If it’s meant to be first and foremost an action thriller, it does have a few nice moves to offer, especially in the climactic mano a mano between the two men on large rock outcroppings that involve risky maneuvers, precarious positions and long drops.” — from Todd McCarthy‘s Hollywood Reporter review, posted on 9.13.15.

I was sent a bunch of Black List scripts yesterday, and the first one I read really works: Terry Clyne‘s I Believe in America — an authentic-sounding, tightly written, 117-page saga of the making of The Godfather. It’s told mostly from the perspective of then-Paramount chief Robert Evans and secondarily the POVs of director Francis Coppola, senior Paramount production executive Peter Bart, Al Pacino, Marlon Brando, Ali McGraw, Mario Puzo, Gulf & Western’s Charles Bluhdorn, Diane Keaton, Sidney Korshak and just about everyone else who had anything significant to do with this landmark 1972 film. I began reading it on my iPhone when I was in Manhattan last night, and then I got on a Brooklyn-bound C train somewhere around page 35. I had finished it by the time I hit Nostrand Ave. I flew right through it. I was hooked from the get-go.

Clyne’s script (Darrell Easton is a pen name) is quite the demimonde of neurotic, obsessive Hollywood power players, and I’m telling you it feels as realistic and trustworthy in giving voice to these characters as The Godfather felt like a Real McCoy portrayal of an Italian-American crime family. We’ve all read accounts about the making of this American classic but it’s very satisfying to find them told so smoothly and believably in such a well-honed, fat-free screenplay.

I know Robert Evans personally (or used to know him back in the ’90s and early aughts) and Cline has totally nailed his manner, speaking style, way of thinking. Coppola sounds like Coppola, Pacino sounds like Pacino…everyone and everything sounds genuine and solid, and the story moves along in a way that feels throughly disciplined and engrossing.

I don’t get sick as a rule as I’m pretty much made of iron. Seriously. Once every couple of years I’ll catch a fever and be delirious on the couch for 36 or 48 hours, but that’s about it. Famous last words. A few weeks ago I began coping with a tickle-throat cough. I knew I should do something about it but I didn’t. Maladies always go away so I wasn’t worried, but this began to be different. I was about to hit a clinic before I left last Wednesday for my annual Christmas visit to New York/Connecticut (which I’m still in the middle of) but I kept putting it off. Over the last three or four days it’s gotten much worse. I’ve tried Dayquil and Robotussin and antihistamines…nothing. No fever yet, but it’s turned into some kind of chronic bronchial thing with a threat of pneumonia. An hour or two from now I’ll be visiting a local doctor and demanding antibiotics. Not good. It was so bad last night I couldn’t sleep.

In ’06 I passed along a story of drunken teenage vomiting during a long-ago weekend party at a New Jersey shore vacation home. It belonged to the parents of Barry, a nice-enough guy I knew and occasionally hung with during my mid-teen years when I lived in Westfield, New Jersey. A bunch of us had driven down there and partied without anyone’s parents knowing, especially Barry’s. No girls, no music to speak of — just a lot of beer and ale and vodka and everyone stumbling around.

There was something grotesque about the guys I was hanging with back then because somebody was always getting picked on. It was a kind of hazing ritual, the idea being to put someone’s feet to the fire and…what, see how they stood up? I never understood this damn game, but mockery, isolation and occasional de-pantsing (a gang of guys would literally hold a victim down and pull his pants off and leave him to walk home that way) were par for the course. It was a social standards peer-pressure thing with the group having decided the latest victim had been acting in a too different or too peculiar way, or had otherwise transgressed the fluctuating standards of Westfield cool. Almost no one was safe. You could be one of the de-pantsing brutes and then the next weekend you’d be “it.”

During this particular New Jersey weekend a big, dark-haired guy named Richard Harris had been chosen as the latest victim. He had thrown up on the floor of Barry’s beach home, and so he had to be punished. Much later that night (around 1 am) we found a dead mouse in a mouse trap, so we threw the corpse into a pot of boiling water and put it under the sheets of a bed Harris was sleeping in. He woke up five or ten seconds later and bellowed “get the fuck outta here!” A half-hour later we went outside and shifted Harris’s Chevrolet into neutral and pushed the car down the neighborhood street about three or four blocks. We were all sitting around the next morning and Harris walked in through the pantry door, glaring like a gladiator and saying “where’s my fucking car?”

From Anthony Lane‘s New Yorker review of Laszlo Nemes‘ Son of Saul: “There is no way in which the film (or a hundred films) could represent the breadth of the communal suffering in the [Auschwitz-Birkenau death] camp. All we can hope for is that the experience — the literal viewpoint — of a single witness can be added to the record. By homing in on Saul Auslander (Geza Rohrig), and on the range of response in his dark eyes, we are made so aware of the monstrosities around him that we do not need to have them spelled out. Bare dead bodies are glimpsed, often fleetingly, at the sides of the frame. The newcomers, who are told that hot soup and a shower await them, and who are then stripped and herded toward the gas chambers, with the help of the Sonderkommando, are seldom in focus, and the same is true of the corpses borne to the furnaces. This strikes me as merciful and right. The question is not one of taste but of imaginative modesty; to watch most feature films — as opposed to documentaries — about the Holocaust, even those as expert as Schindler’s List, is to be left with a lasting moral queasiness about the limits of dramatic reconstruction. Just because you can attempt a thorough depiction of a death camp doesn’t mean that you should; if your audience goes away convinced that it now knows what went on at Auschwitz, you’ve done something wrong. That is why I admire the judiciousness of Nemes. He gives us only shards.”

Yesterday afternoon I went over to the NY1 offices (9th and 15th, above the Chelsea Market complex) for a podcast chat with the Sitting Around Talking Movies guys — Neil Rosen, Bill McCuddy, Bill Bregoli and Mike Sargent. The only problem was that the directions McCuddy gave me were wildly imprecise, and nobody on the ground floor had clue #1 which elevator I should take. I was about to shine it when McCuddy showed up and escorted me upstairs. We kicked around David O. Russell‘s Joy, Quentin Tarantino‘s The Hateful Eight, Alejandro G. Inarritu‘s The Revenant and Will Smith‘s Concussion. Thanks to Neil and Bill for inviting me — let’s do it again.

41 Comments
Nicely Compensated vs. Rolling In it

Two days ago a Daily Mail piece reported that while Harrison Ford could make up to $34 million for playing Han Solo in Star Wars: The Force Awakens (i.e., $25 million plus a sliver of the film’s gross earnings after it passes $1 billion in ticket sales), Daisy Ridley and John Boyega were paid a flat fee of $450,000. Carrie Fisher pocketed around $1.5 million. Force Awakens director J.J. Abrams was reportedly paid $5 million plus a 2% share of gross earnings. The worldwide grosses of The Force Awakens are expected to pass $2 billion.

The same day Variety‘s Justin Kroll reported that the fees were somewhat less. He stated, however, that Ford was paid over 50 times more than Ridley and Boyega, whose fees were between $100K and $300K. Ford’s paycheck was somewhere between $10 and $20 million, Kroll reported, but probably closer to $15 million if not higher.

This Rumors-inspired album jacket is by London-based HMV employee Steven Lear, who is otherwise known for WhyTheLongPlayFace? on Facebook and Instagram. It was highlighted by Ryan Steadman in a 12.22 Observer piece. 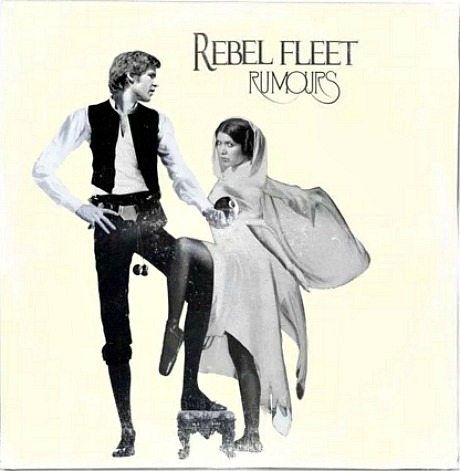